Earlier this week the Japanese turntable manufacturer, Panasonic, issued a statement to the Tokyo Reporter officially stating they will be discontinuing the Technics 1200mk6 turntable. After years of speculation that it would be going the way of the dodo, the economic hammer finally dropped and ended a solid 30 year run. Even though this site is decidedly controller focused, there is no question that the original dj controller was fantastic tool and will be well missed by all.

The following statement was issued from Panasonic headquarters to the Tokyo Reporter:

“Panasonic decided to end production mainly due to a decline in demand for these analog products and also the growing difficulty of procuring key analog components necessary to sustain production,”

Regarding the Technics brand itself, nothing has been decided other than the discontinuation of the mentioned products

This probably means that they will continue to produce the CDJ style equivalent called the SLDZ1200 Digital Turntable. However the SL -1200 MK6m which replaced the mk2 in 2007,  is the only analogue turntable listed on Panasonic’s product listing page, and it is most certainly discontinued (see image bellow). 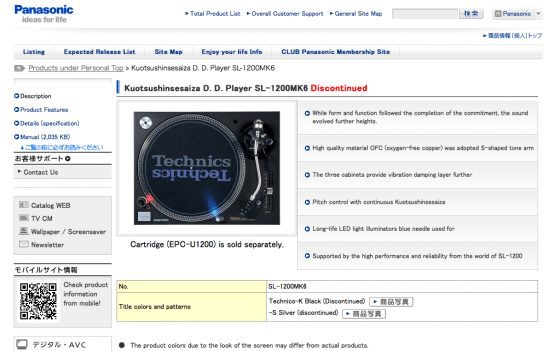 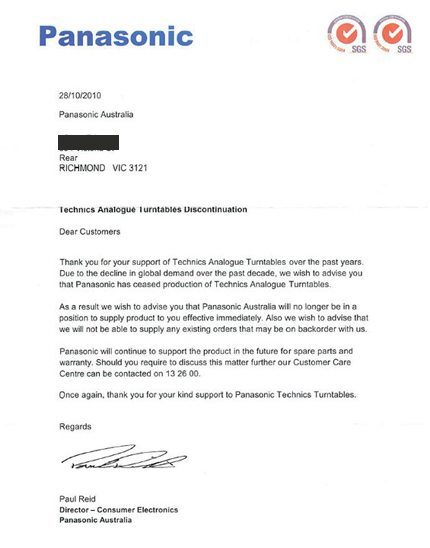 The defacto dj tool for decades, this turntable holds a special place in the hearts and minds of many djs. Most turntable based jockeys refuse to play on anything else and its easy to understand why. They are rock solid reliable, easy to use and built to withstand the brutal beating they receive night in, night out.  In 1996, I pawned 3 guitars to purchase my first pair of 1200’s and after years of gigs, several cross country trips, and countless falls they are still spinning in the TechTools office today.

Besides their fantastic construction, there was one important element in the this turntable that separated it from the rest and enabled a entire new field of music:  “turntablism” 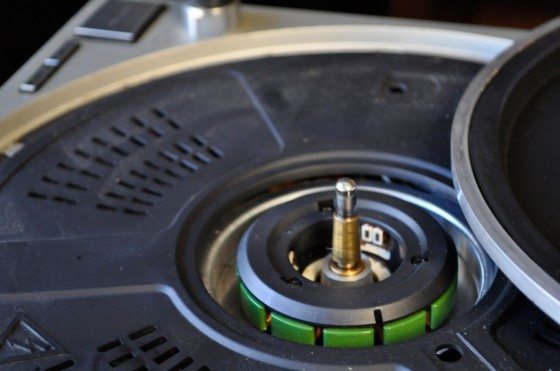 That feature is the  coveted direct drive system, which uses magnets to propel the platter in a rapid way that belts never could. This “third element”: magnets, is a force expertly leveraged by turntablists to enable them to do things with a linear peice of audio that the bare hands alone could not achieve. Its also an effect that controllers have yet to really duplicate well. 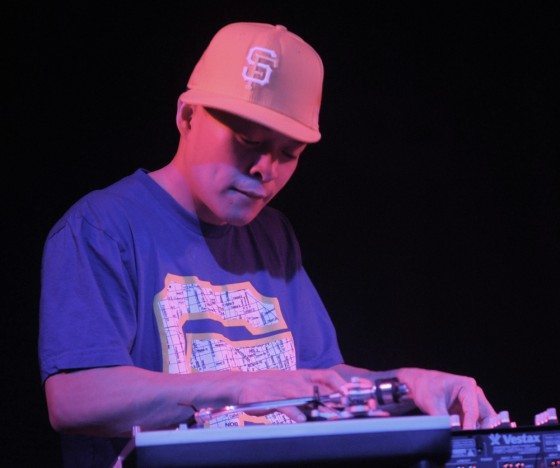 Turntablists like Q-bert above, have shown that the simple turntable combined with a mixer can be a remarkably expressive instrument. When used with great dexterity and extensive practice it can produce the full range of musical expression including attack, decay, amplitude and tone- all from a single sample!

The good news is that with so many of these turntables in circulation (3.5 million sold since 1976), and their robust build quality- there will always be turntables available for those that want them. Controllers will continue to get better and hopefully, someday, reach the level of quality required to replace such a historic instrument with features and performance that live up to tough demands of djs, controllerists, and turntablists alike!