The Science Of Djing- Music Chills and Pop Cycles

Ever wondered why you get chills when listening to music? Perhaps you might have  suspected cycles of pop music seem to follow economic cycles. Well, writer Yale Fox has an entire blog dedicated to studying the “science of nightlife culture” called Darwin Vs The Machine that has looked at both subjects. In today’s article he goes into the chill theory and why popular music may pick up in pace as the economy slows down.

Have you ever listened to a song that’s given you shivers? The pleasant feeling of chills running up your spine are actually called Frissons. What is it about music that induces this feeling? I listened to this lecture by Dr. David Huron that discussed his theory behind it.

Biologically, chills are called piloerection. They are characterized by a pleasurable, cold sensation which sometimes produces a shudder. Chills are something we can normally experience based on certain stimuli.  At the core, these chills exhibit themselves as a result of surprise. It is the failure for the organism to predict their environment and what is going to happen next. The neurotransmitters released during this type of response are catecholamines; epinephrine (adrenaline) and dopamine. This brief and pleasurable scare is equivalent to the reason we enjoy rollercoasters and watch horror films.

Here are some other examples of when we experience these frissons.

This is a classic example of the organism not being able to predict their environment. The body feels a sudden change in temperature and reacts by eliciting the fight or flight response.

It comes as a surprise again, and is usually a sign of warning or help from another member of our species. Whether running to help, or running for safety it’s an indication that something unexpected is occurring in the environment.

HOW CAN I WORK THAT INTO A SET? 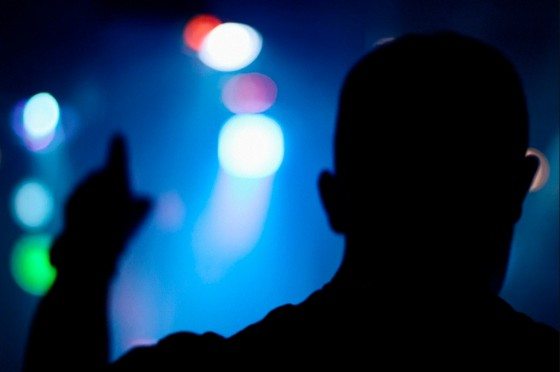 A large part of music that we enjoy is the balance between predictability and unpredictability. This is probably a good way to think about track selection for your DJ sets, trying to put yourself somewhere in between predictable and unpredictable place. Perhaps adding an interesting effect or unique twist on a familiar track would be enough to induce that wonderful chill we associate with a great musical moment.

Personally, the only music that really gives me chills is lyrically based. More specifically, Punchlines and complex verses. This still fits the theory, as usually these lines are totally witty and unexpected. There’s no way of really predicting the verse before you hear it. The fact that it is a heightened emotional response means it likely becomes imprinted for future reference. Additionally, if I know the words to the song- I find I don’t get chills when I hear it again.

Virtually impossible to conduct a lab, different people are surprised at different times. I think the best thing to do is put this up to open debate. If readers could post their comments and suggestions- or specific songs and points in the song where they experienced chills.

DOW VS BPM- ARE THEY RELATED?

I took a database of every song that has ever touched ground on the billboard top 100 charts since 1955-2009. Songs were analyzed and sorted in terms of two important characteristics; (i) tempo and (ii) modality. Tempo is measured in beats-per-minute, and is the general speed of the song. Modality or mode refers to whether or not the song is in a Major or Minor key. Major keys sound happy, and Minor keys sound sad- even an untrained ear is able to easily detect this.

I have graphed what I believe to be two of the most emotional aspects of music, with something that affects the emotions of countless individuals- the stock market. The results are listed below, and they were astounding. 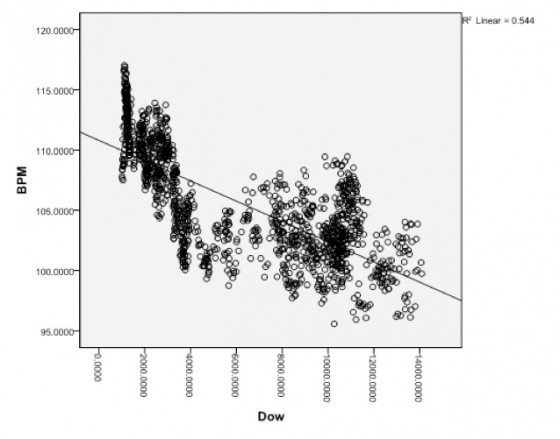 check out the full article on the relationship of the DOW and Music trends over at Yale’s blog, Darwin VS the Machine