With Apple now allowing all Ipad apps to directly access music in the Itunes music library, a bevy of new programs will begin to offer the first peeks at what future ipad djing might look like. In the example above, the Djay software from Algoriddim has been ported over  to the Ipad with a few nice touch elements that appear to work quite well. Numark also explores the paradigm of auto mixing with the IDJ app, which we have after the break. 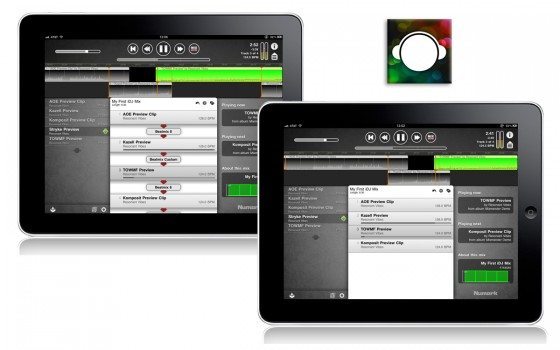 There is one other application (that we know of) that is currently taking advantage of the new Itunes access. It’s a Numark release called IDJ that enables mix tape/mix sequence creation with “patented” auto Beatmatching technology. It appears to be a really simplified version of Ableton’s sequence view where you can lay out a mix and draw in transitions with automatic tempo matching. Perhaps for a quick and dirty tempo-matched playlist, this might be a handy tool to have around.

What do you think of these apps?  We are still waiting with baited breath for all the crazy controller apps that will surely surface once MIDI-In and Out is finally released in 4.2. A preview of what might be coming is the following video; weird out of the box interfaces that combine animated graphics, multi -touch and a smidgen of magic.

Dj Apps for the Ipad

Producer Apps for the Masses

Can You DJ Off The Internet In A Club? Djay Pro + CDJs +…