For too long, the DJ industry has been going round in circles – literally. Novation’s latest offering to the DJ world eschews the entire ‘wheels of steel’ principle and tries to show us another way. We took a look to see whether or not it’s the right way to turn. 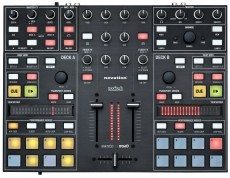 All Dj TechTool’s readers get 10% off a Twitch unit. Click here and use the promo code: ReviewTwitch

In daring to think outside the box, Novation have really come up trumps with Twitch. It looks good, feels sturdy, and the Slicer mode in Itch is a lot of fun.

Twitch is small and light enough to sling into a bag with a distinct lack of fuss. Construction wise it’s actually quite similar to the NI Kontrol X1 and Maschine, with lightweight plastic body, a brushed metal fascia, and rubber buttons. Totally bus powered and with the audio interface onboard, portability is a high scoring area for Twitch.

Inputs and outputs are ¼” TRS for master, RCA for booth, headphones with both size connectors on board and a discreet input that will accept RCA input round the back and ¼” mic on the front. Booth output can be switched between master and cue operation, and all in all the audio quality from the 24/48 audio interface is both loud and clear. 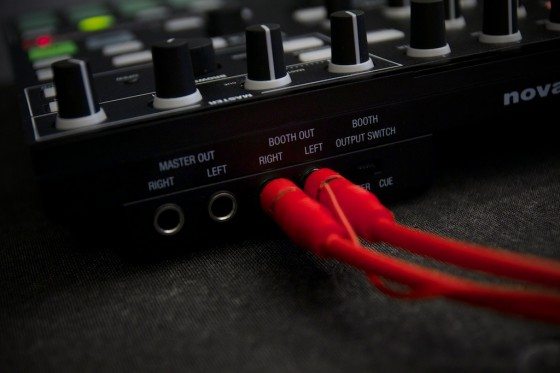 It’s no mean feat to power a unit with as many flashing lights as Twitch, whose dashboard is somewhere between space shuttle and KITT (90s babies may, regretfully, miss out on this reference). The relatively small amount of juice that the unit can draw through USB means the lighting lacks a certain radiance in direct light, although it’s still clear.

The size of the unit really feels just right. Because the touch strip, faders and pads are all within easy reach of each other experimenting with tricks and effects feels natural. If I had one qualm it’d be that the main effects are in the corner away from the action, but even mulling that over made me consider that as a cue for the audience to really connect with you as a performer, a little movement around the interface is a good thing. 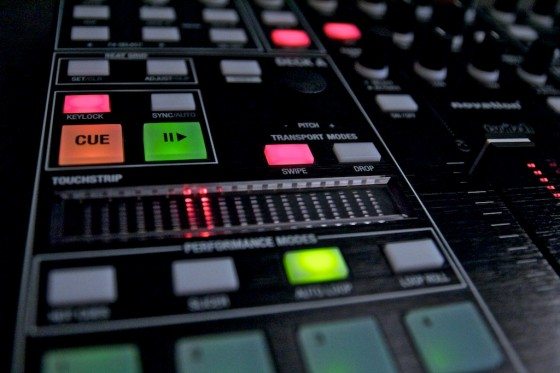 Twitch’s USP is the fact that rather than emulating the turntable based DJing paradigm, it focuses on buttons and touch strips to control the action. This might seem a small point to some, especially those that have never focused their attention on turntables or platters, but in operation it turns the Twitch experience into something that feels fresh and, dare I say it, pioneering. Invariably when confronted with a new controller, I go through the motions of exploring its strengths and weaknesses when it comes to scratching emulation and transferring the tried and tested DJing paradigm to its controls, and it usually feels like the manufacturer has had a very similar process during design. Twitch is completely different, and because there’s very little common ground between it and what we already know, I found myself immediately trying new things and exploring new ideas rather than rehashing (and often compromising) skills I learned on vinyl. 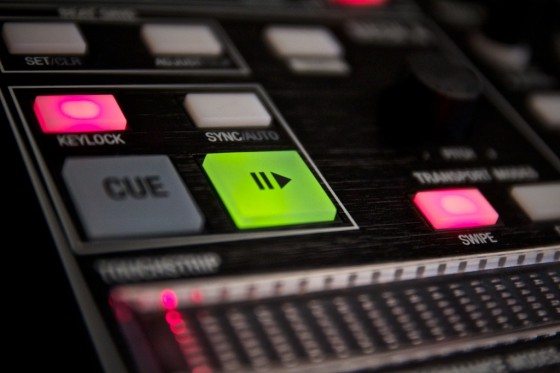 Of course I did try to see how the touch strip performed for scratching and manipulation, unsurprisingly the scratching sounds aren’t really worth playing with, as the small touch strip doesn’t give the accuracy required for anything approaching a party ready sound effect. That said the spinbacks sound great – we heard from Serato that despite the linear nature of transport in Twitch the deck is still modeled on a rotary platter, so flinging the playhead back and forth sounds pretty authentic. 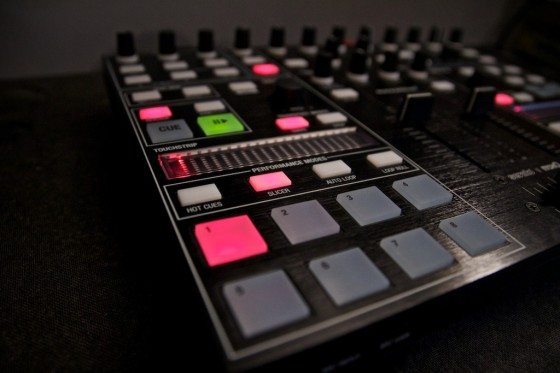 Slicer mode works by creating a section on the track and splitting that section into eight evenly spaced cue points, which are triggered by the pads. There are two modes: one press of Slicer mode makes the section shift forward continuously, letting the track play as normal, and two presses actually loops the section. Section length can be adjusted with a pinch gesture, so if set to one bar you get to play with and rearrange 8th notes of the track, if set to two bars each pad lands on a beat, and so on. As the sequence plays, triggering a pad will rearrange the playing audio but the track will always resume where it would have been; it’s akin to loop roll. The timing of the triggering can be adjusted with a single finger swipe of the touch strip too, from extremely quick stutter effects when the pad is held down to the length of the slices or longer, which has the effect of quantising the button presses. There’s one more aspect of Slicer mode, and that’s that if you’re in the middle of a slice juggling pattern when the track would normally move on, it remains locked. Put all this together and you get a function that you can get really creative with, from things as simple as an advanced loop roll all the way to live remixing. 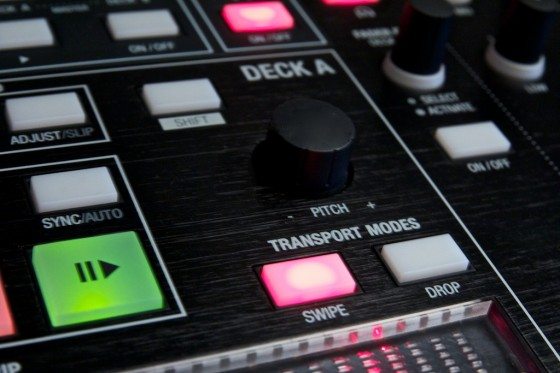 Fader effects are another great addition to the unit. With the tap of a button the faders change from track volume to effect parameters, and the ergonomic advantages to having effects right in the centre of the action are huge. It really does highlight the limitations of Itch though, if you’re used to complicated fader effects arrays like those facilitated by Traktor in the Midi Fighter Pro mappings, and I’m looking forward to the forthcoming Itch 2 release which should hopefully improve the effects support of the software line.

As a way round the long annoying ‘pitch fader conundrum’, Novation have plumped for a rotary encoder for Twitch’s decks, and it’s implemented fantastically. Single clicks of rotation will adjust the pitch by 0.01%, but acceleration compensation kicks in for fast turns and a quick half twist will shift the pitch 3% or so. Of course, manual pitch adjustment is becoming less and less important, but it’s still handy to have, and combined with the touch slider’s pitch bending capabilities it gives you, arguably, even more control than a CDJ when it comes to riding tracks with tempo drifts (on that note, here’s hoping the Itch 2 update allows for more advanced beat gridding).

The only build quality issue I have with Twitch is the faders, as the channel faders are perhaps a little bit waggly (that’s the technical term). The crossfader has about the same cut lag as a Pioneer DJM-800, so whilst it’s not perfect it does work for some cutting when using Twitch as an internal mixer for a Traktor Scratch setup, and something that I just started to really get to grips with before the review. At the moment I’m trying to squeeze a moment of genius out of my noggin that’ll allow me to hack together a Slicer mode for Traktor, but I have a nasty feeling it’s not possible right now. If and when it is, though, Twitch could really be amazing as a Traktor Scratch mixer (required purchase of a NI audio interface notwithstanding). 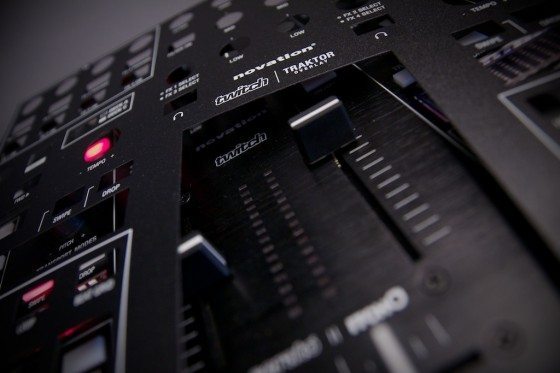 Twitch is primarily an Itch controller, and the Slicer mode is a genuinely innovative feature that’s not on any other DJ software out of the box. That said, Twitch works very well with Traktor and Ableton Live (the touchstrip definitely feels best in Itch, though), and indeed there’s a pre-printed overlay for the included Traktor mapping in the box. The bottom line is that Twitch is still definitely a DJ controller, not a generic MIDI controller with DJ capability shoehorned onto its buttons, but it takes things in an interesting new direction. It’s a slice of forward thinking (geddit?) that’ll hopefully persuade other manufacturers to be braver with their designs.

Are you excited about Twitch’s approach? A short video demonstrating our favourite bits of Twitch is on the way, but in the meantime let us know your thoughts and ideas for using Twitch creatively!