Show Off Your Kit, Show Us Your Setup!

DJ TechTools has long prided itself on our very strong forum community – if you’ve never been there, you should know it’s one of the most valuable resources on the internet for DJs.

Today, we’re proud to announce a new feature article and matching forum, based on the most popular forum thread of all time! “Show Us Your Setup” is the new section, and once a month we’ll choose one lucky reader from those posts to feature on the front page of DJTT. Today, we’ll be looking at DJTT contributor SmiTTTen’s setup!

Bam! What an awesome setup, right? Traktor Scratch through the S4, with a Midi Fighter Pro and Vestax Pad-One for effecting, all running through Rockits – nice! We couldn’t pass up a chance to ask SmiTTTen a few questions to get the complete 411 on his kit and how he uses it.

Hiya SmiTTTen! Awesome setup, can you describe how you use your gear and what your standard workflow/practice session consists of?
There really isn’t a standard workflow these days. To be honest, the different components in my setup just form a palette and I tend to pick and play depending on what I am trying to do or what mood I am in. Right now there is an emphasis on scratching. It’s something I have always wanted to master but I have only gotten around to taking it seriously in the last few months. I have a bet with someone to see if I can become the World’s oldest DMC champion. Unfortunately I cannot remember which side of the bet I took!

As for the other components, the Midi Fighter Pro and Vestax Pad-One tend to take on different roles depending on what I am up to. Sometimes I use the Pad-One with Ableton’s Drum Rack for live “drumming” (well as much as you can do with your fingers – though I am pretty quick). I also have what I call the “Gypo- Thrasher” mapping for the Pad-One that uses the XY pad and four pads. It happily destroys any tune in a matter of seconds. 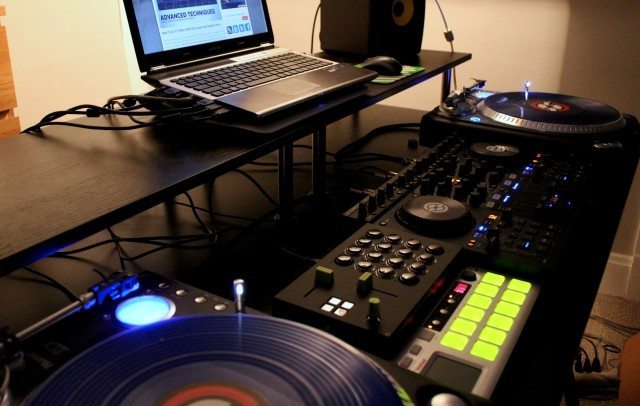 Do you find that you are using one piece of kit more than the others?
The S4 is definitely the core component for me, as there is nothing that I do that does not involve the S4. It’s excellent piece of kit in its own right, and when you throw in Traktor’s MIDI capabilities and the option for turntables it really does become the anchor for my system. I did find the crossfader somewhat limiting for scratching, so I upgraded to a version of Audio Innovate’s Innnofader called the Innobender (Editor’s Note: look out for a feature on this DIY mod in the near future). Adding the Innobender has essentially transformed this MIDI controller into a full-on scratch mixer. I did however, trash my warranty in the process (anyone got a spare sticker?).

Anything you don’t really use but could never part with?
I sold my original setup a few years back when my early thirties temporarily convinced me that I had no time for music, so as of a year ago I had no equipment at all. Since then I have built up a usable setup but don’t feel there’s any dead weight right now. That’s probably largely due to me selling my 1210s in 2008. That was a truly traumatic experience that I relive on a daily basis. I have even contacted the chap I sold them too and asked him to sell them back to me. The b@$^%# kindly refused. To anyone reading this: If you ever consider selling your 1210’s – DON’T, it will be something you regret for the rest of your life.

No hardware mixers – did you ditch one when you got the S4? Any regrets?
Not right now, but I think that may well change in the future. A friend of mine works at Allen and Heath and tests all their products, so I am currently trying to talk them into sending me a review unit of the DB2. Once I get it I will quickly unfriend him and move house.

Do you normally use your second monitor to DJ?
I used to but less so these days unless I want to run different apps on different screens. Like a lot of people, I would like to be less attached to the screen.

Why so many turntables? And no Technics?
You had to bring it up again didn’t you? I can only assume that you guys are getting me a set for Christmas and this is just a teaser? The TTX1s are what I use primarily. I picked them up for next to nothing and they are pretty good for scratching. The TTX1s do have some serious issues with heat sinks (or lack thereof) and are known to overheat and destroy the IC chip. I haven’t run into that yet but if becomes a problem they will be out the door pronto. The TTX range that came after (i.e. any model without the 1 ) don’t have that problem so I don’t want people worrying that they have an issue. The Vestax decks need a little work before they will be back online again.

Ultimately, I will go back to Technics. It’s not that they are better than everything else out there; it’s just that I learned to play on them and had a set for 15 years. My setup won’t be “complete” until I bring them back into the fold. Ok, I’m going to head off for a quick cry now… 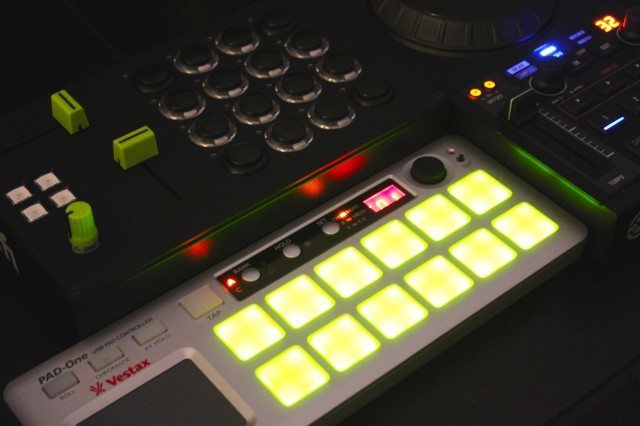 What do you use the Midi Fighter Pro and Pad-One for? Do they work in combination, do you like one more than the other?
If I am totally honest, this is probably a symptom of Rapid Gear Acquisition Syndrome (Editor’s Note: We’ve heard that RGAS is highly contagious. Be careful.) There are however, significant differences between the units. The Pad-One has the XY and the velocity sensitive pads. The XY is fun for effects and the pads are a joy for drumming on in Ableton’s Drum Rack. I also like that you can re-assign MIDI values to pads on the Pad-One unit without touching any software. The Pad-One is also built like a tank which is always a bonus, especially if you consider some of the other junk on the market that seems like it does the same thing.

I picked up the Midi Fighter for a couple of reasons. Firstly, I am in my thirties and grew up playing games like Konami’s Track and Field at the arcade so the tactile feel of the unit was always going to be appealing. More importantly is the development and support for the product. The Pad-One is an excellent product but you are on your own with mappings and support (just try to find something on the Vestax website). With the MF there are firmware updates, vendor mappings, lots of user mappings and a lot of expertise in the user community. At this point I know people will expect to hear something negative about the Midi Fighter in order to take this interview seriously so what can I say? Well, I really want to put an Innofader in a Midi Fighter Pro and there isn’t room (though I am not done with this project yet). I was hoping that the MF Pro was more “moddable” than it is. I am also not overly impressed with DJTT’s customer service these days; no one calls me Baby anymore.

When you go to play a gig or party, what do you take? What do you leave?
Right now I take everything except the decks. I can throw everything in the DJTT S4 bag. I promise you this is NOT a promotional piece – I just buy a lot of stuff from DJTT. Once I get my scratching to an acceptable level I might take decks if I have to.

What kind of desk is that?
It’s IKEA of course. I believe it’s the Expedit Desk system. If you want a micro-review here it is: It’s great because it comes in a variety of DJ and home-office friendly dimensions. Also, the legs are adjustable so you can set the height to exactly what you need (I think they go up to around 36”). I will say that the veneer on it is awful. It doesn’t take a huge amount to split or rupture the veneer. I would still buy the same units again but I would varnish or lacquer the surface a few times first. 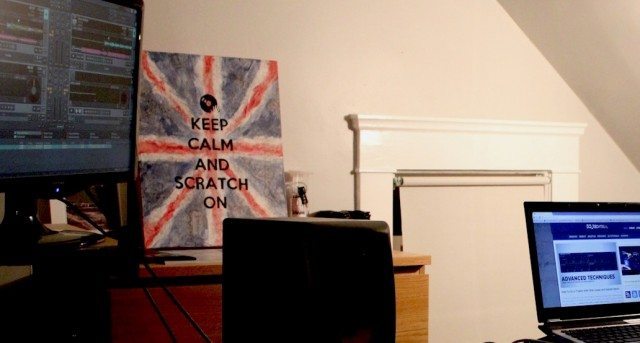 Lastly, everyone wants to know – where’d you score that awesome “Keep Calm And Scratch On” poster?
I scored it from my wife! I just got it as an anniversary present last month. It’s actually a canvas that she decoupaged and hand painted. I just asked her how to spell “decoupage” and her response was, “Don’t you give out my trade secrets, if people want one, they can buy one from me!” I guess she takes Paypal.

Thanks again to SmiTTTen for sharing! And now, over to you all – to get a chance to have your awesome DJ workspace featured on the DJTT blog, sign up on the DJTT forums and check out the brand new sub-forum, Show Your Setup!