Earlier this year at NAMM, Rane announced they were phasing out their popular TTM 56/57 line and replacing it with the Sixty-One and Sixty-Two mixers. We called up our friend Charles at Thud Rumble (Q-Bert’s crew) to see if the new 62 series is destined to become another club standard like the 57. Check out his full writeup on Rane’s newest mixer inside!

Playing with the Rane 62 for about a month, it’s pretty easy to grasp the new layout and functions of this mixer, especially for a long-time 57SL user like myself. The Sixty-Two is a two channel battle mixer with an effects unit, Serato Scratch Live controls, and dual USB ports/soundcards that provide the ability to seamlessly switch between two DJs. What most people notice first  about this mixer is that the buttons are much improved from the 57SL and 68 mixers, but can still have some missed triggers if doing complex cue drumming.

Editors Note: The 57 buttons were easier to press but notoriously prone to breakage. The 62 implements larger, more robust buttons that are sure to last longer but the playability leaves some things to be desired. 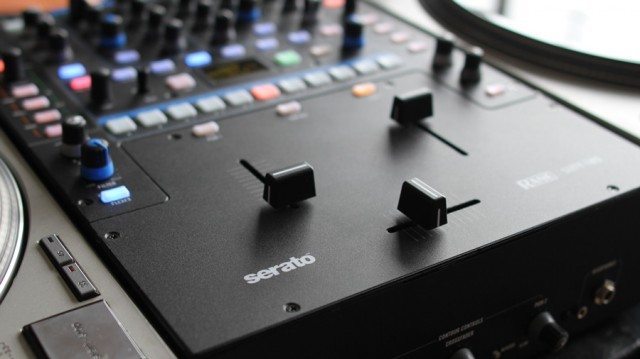 Overall, the layout is great. It only takes a few sessions to get used to it. The mixing section is well spaced- plenty of room to go wild on the faders and crossfader with no fears of knocking an important control by accident. The EQ section suffers a bit in this regard – while the low end EQ knobs have plenty of space around them, the mids, highs, and gains are packed in a fairly small space, not ideal for folks with larger fingers.

This mixer is built to Rane’s usual high quality and design standards. As mentioned above, the cue buttons are well improved over the Sixty-Eight’s tighter buttons – with much better response and playability. Hopefully they don’t yellow with age (the buttons on the DJTT office Rane Sixty-Eight is showing a bit of yellowing after a year of use).

As far as the knobs on the mixer, they’re also up to the Rane standard. They feel a bit lighter than knobs in the past, but it’s worth pointing out that the rubber grips on top of most of the knobs do add a nice new level of tactility to the mixer. The knobs also have metal nuts holding the stems securely in place – another trademark sign of a quality mixer.

The main improvement I would have suggested was keeping some of the controls and buttons open/assignable or even having another set of function buttons (see the top section of the VCI-380, but also add SP-6 control).

The things that I miss the most are the J1/J2 assignable toggle switches and assignable footswitch control (the key word here is assignable). 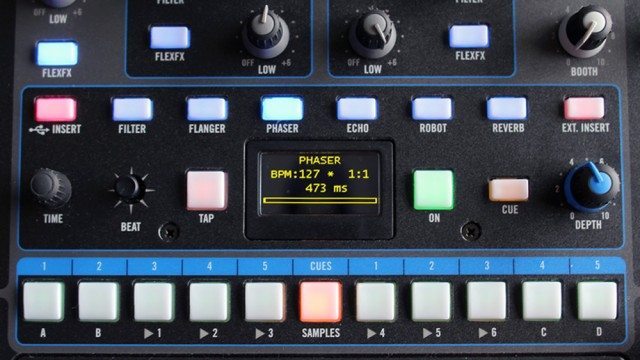 We’re pretty sure these effects were migrated straight from the Rane 68. They’re set into the flow of the mixer well, with better integration than the 57SL. But as improvement, it would’ve been great to have those effects banks open and assignable/programmable to DJ-FX and a capability to save DJ-FX to the mixer. As far as the quality of the effects, they’re still a far cry from the effects on Pioneer or Allen and Heath mixers, and even not quite on par with the effects that Traktor has to offer.

The effects are assignable to either channel, or the Mic/Line inputs – this assignability isn’t selective, meaning if you want to throw an Echo onto channel two and your mic at the same time, no problem!

The SP-6 unit controls are assignable to either computer plugged into the mixer by using the buttons in the top left or right of the mixer, but I would’ve loved for those buttons to be shift buttons to unlock another layer for each SP-6 channel and possibly assign/instant double the active track into a SP-6 deck.

Things That Don’t Quite Work

Theoretically, you should be able to assign the second USB port to send/return VST effects from your laptop. At the moment you can’t plug two USB ports into one laptop – this confuses Serato Scratch Live since the USB soundcard is locked to the software. Perhaps Rane will come out with a fix for this, but for now the only way that you can get this working is with dual laptops.

You can only MIDI assign some of the buttons – some of the buttons have locked-in functionality to Serato Scratch Live, which is a shame. I’ve read in the Serato forums that it’s more of a software issue than the hardware itself, so perhaps in future Serato updates we might see a complete MIDI mode like those found on the DB2 and DB4. 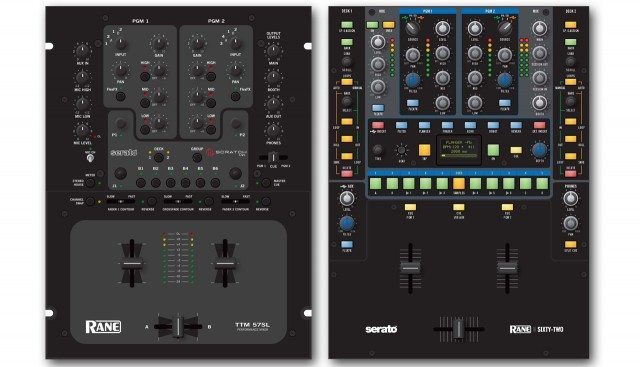 When looking at the Rane Sixty-Two, it’s important to make direct comparisons to the Rane mixers that came before it. We’ll use the Rane TTM57 SL as a comparison. So what’s changed, both cosmetically and in regards to the feature set?

What’s Been Taken Out?

There’s was quite a bit of buzz during NAMM surrounding the artist edition of the Sixty-Two that was designed by Z-Trip himself. It’s worth noting that there’s no functional difference in these mixers, it’s purely aesthetic – with a Shepard Fairey design printed on top plate and purple and yellow accents on the knobs. It’s slick, but it’s slightly more expensive at $2,100.

That sure doesn’t mean he can’t tear it up on the mixer – have a look at the solid demo that he did on the unit at NAMM!

If you’re looking for a solid mixer that plays nice with the latest features in Scratch Live, has a digital effects unit and a need for multiple USB ports for advanced performance or easy transitioning, this is most certainly one of the top mixers out there for exactly that. It’s not the most cost effective mixer for those who are just getting started, but if you’re a scratch student with gear lust or a serious turntablist looking for a solid new digital piece of kit, the Rane Sixty-Two might just be what you’re after.

Notes From The Manufacturer – Rane reached out to us wanting to highlight and clarify a few items that were brought up in this review. They’ve got a lot of additional insight to share, so have a full read of their notes below!

Filter resonance of the dedicated high-pass/low-pass swept filters for PGM 1, PGM 2, and USB Aux are adjustable from Rane ASIO or Core Audio control panels or the Serato Scratch Live

The FlexFx bus used in the Sixty-Two mixer supports six built-in effects, external analog effects and computer based effects via the USB Insert. The USB Insert allows the use of post-fader Scratch Live effects or VST/AU plug-ins when using third-party software applications. It is possible to combine or stack internal, external analog and USB Insert effects to create advanced effect chains that far surpass the basic effects found on most mixers.

The Sixty Two has two built-in 20-channel sound cards with ASIO and Core Audio drivers. Each sound card is on an independent USB port, allowing?easy changeover between two Scratch Live or third-party software users. This configuration also supports running Scratch Live on one USB port?while running a third-party DJ or DAW software application using ASIO or Core Audio on the other. This allows very flexible use including additional source options for the mixer and multi- track recording while using Scratch Live. Every knob, button and slider on the mixer is a MIDI control that may be mapped in Scratch Live or third-party software application. When using two USB ports, mixer MIDI for each deck is only sent and received from the selected USB port.

This means that MIDI mapping in an application on one port will not conflict with mapping onthe other port. Mixer MIDI not associated with an input channel strip is assigned to one channel or the other using the SP-6 Assign buttons at the top of each virtual deck control strip. Examples of controls that may be assigned to one channel strip or the other are SP-6 buttons, FX controls, Mic controls, Aux channel controls, headphone controls and contour knob/switch controls. This means that regardless of the software being used, a DJ using PGM-1 on USB A can have their own MIDI mappings and use them when the input source selection is set to USB A while another DJ using PGM-1 on USB B has their unique mappings that work when the input source selection is switched to USB B.

The mixer also has the ability to send and receive MIDI beat clock information from third party software applications. MIDI beat clock information derived in the mixer from a manually tapped BPM or a BPM acquired from Scratch live is broadcast out both USB ports. Users have the ability to choose a MIDI beat clock or BPM as the beat source for internal effects. There is currently no support for remapping the dedicated controls on the mixer such as load, scroll, loops, cues, and samples. With a firmware and software upgrade, available in the upcoming 2.4.2 release of Scratch Live, users will have access to 5 layers for left-hand controls and 5 layers for right-hand controls, allowing five unique mappings for left-hand and right-hand controls.

Special thanks to Charles for this review! Charles is one of the folks behind this year’s Bay Area DMC Regional Battle, which is this Saturday! Click here for more info.