The Next Big Thing: Dance Music Genres On The Rise

Dance music is a mutant creature that is growing, changing, and adapting to an environment where beats are everywhere, including the Top 40. DJing has become a pop culture stock exchange where those involved are looking to pull a Martha Stewart (without the jail) and get some insider tips on what will be crowned as The Next Big Thing. Residencies hang in the balance.

Mutant clue number two: It’s kind of incestuous. The internet hype machine splinters genres into subgenres and subgenres into microgenres, and when one style loves another one very much, new hybrids start to pop up. They’re handed one of two fates: Die out and be labeled as musical missteps—flavors of the month, maybe—or grow to become the top of the food chain. House, techno, hip hop, dubstep –they’re all constantly morphing, reinventing themselves for an increasingly beat-hungry world. Really, “house” doesn’t mean the same thing in 2012 as it did in 1992, and it doesn’t mean the same thing in Chicago as it does in Houston.

With scenes across the world making their own brands of dance music, it’s time to play Darwin and see what’s being bred in the bedrooms, the backrooms, and the boulevards. Established local scenes come with styles fully formed, and some support may be all it takes to get some homegrown genres ready for a shot at a Grammy.

Branching out from Chicago’s ghetto house scene, where machinegun drum tracks were married with lascivious rap samples and little else, juke music is an even faster, more syncopated evolution of that signature ghetto house sound. DJs like Funk, Slugo, and Gant-Man made a splash in the late 90’s as ghetto house originators, but when popularity began to diminish, they stripped the style back to its basics, adding some spring to the drum patterns and bumping up the BPM by a few notches.

Critics might say juke’s potential as a world-changing genre was DOA, as it has had a chance to explode in 2006 when it had a sharp but short rise in the number of DJs showing support. Still, juke (and footwork, the name for juke’s more experimental twin and its signature dance style) has recently piqued the interest of some European tastemakers, particularly those at the Planet Mu label. The recent exposure could make juke an explosive force –the fuse might have been just a little longer than expected.

Taking a trip all the way across the country lands us in New Orleans, where bounce music is the regional sound of the streets. Just like the “Amen break” in jungle and drum n’ bass, bounce music draws heavily on samples taken from early 90’s track “Drag Rap” by The Showboys. Local producers mangled that beat, allowing New Orleans rappers to spit call-and-response lyrics that forsake nuance and technique for in-your-face dynamism- it’s simple, and it bangs. Also noteworthy is sissy bounce, which is bounce music made by openly gay rappers like Sissy Nobby and Big Freedia. The level of acceptance recalls the Warehouse scene of Chicago in the early 80’s, where gay culture pointed the way towards the future of dance music. Between the elastic nature of its cornerstone beat, the inclusive nature, and the sheer excitement in the sound itself, bounce has a ton of expansion potential.

In much the same way that recent indie rock has pulled inspiration from lo-fi, hazy, gauzy sounds, West Coast rap music is right alongside it. Cloud rap’s particular charm doesn’t lie with the lyrics (which still uniformly revolve around swagger) but the production, which dials back the kick drums and bombast in favor of a soft focus feel. The drums patter instead of thump, the synths bubble instead of buzz, and the samples come from airy female singers rather than dusty funk samples. It all makes for ethereal, proudly pretty beats that slink by on heavily blunted charisma and a surprising litheness; no full on dancing here, just head nodding. It’s the willingness to reach outside of rap’s traditional influences that gets cloud rap (sometimes derided as a premature industry buzzword) a spot on the list. If the sphere of influence continues to expand, we could start to see revolutionary productions start to creep into niche rap microgenres.

Listening to kwaihouse, you could hear eleven different dialects (including English and Afrikaans), but the underlying sound is familiar enough to break through any language barriers. In the 90’s, South Africa developed Kwaito, a hybrid genre that slowed down a basic house beat and then layered traditional African instrumentation and singing over the top. Fast forward to the present, and Kwaito’s influence looms large. Afrohouse (or kwaihouse) forgets about the molasses-slow tempo in favor of a group of sounds that owe more to progressive house than anything else, but still retain a traditional African flavor. The African expression of house isn’t limited by American or European tastes, so if it works on their dancefloors, they add it to the mix. It can be a thrilling take on the genre, and it shows how outsider interpretation can reinvigorate an art form. If they continue to add disparate pieces into their formula, we could see a full-scale reinvention of what we consider world music.

In the aftermath of minimal, our friends over in Germany slowed things down and took a left turn towards soulful. While the new deep house trend has been growing strongly for a while, it appears to gaining strong traction in lots of markets. One could even argue it has already crossed over and is the current big thing, with hits like Rapture’s “How Deep Is Your Love” getting some serious play. This newest iteration of deep house is marked by its slow tempo (115-120 BPM) and very sparse, but soulful arrangements. 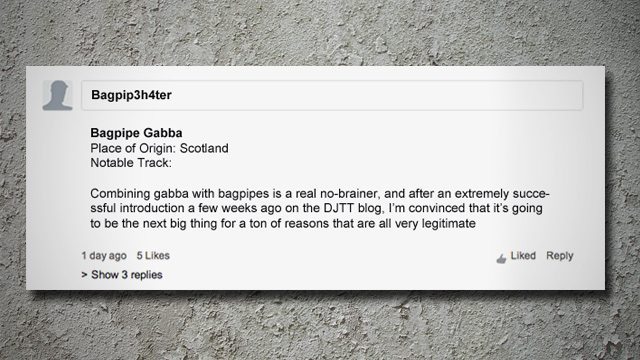 Obviously next big genre movements are created by popular consensus – and through the DJs that drive exposure! So we’ve decided to turn this post into a bit of a fun game. What smaller genres do you think could champion their way into becoming the next big thing in dance music? List your favorite regional small genre (one per comment!) and vote up the responses you think will pop in 2012.