After a lengthy build-up extending back to the 2011 BPM convention, Allen & Heath’s new contribution to the growing slim-line compact controller field, the Xone:K2, will hit the shelves at the end of this month. Part update to the discontinued Xone:1D, and part open-ended answer to Native Instrument’s Kontrol X1 and F1, the Xone:K2 combines deep programmability with a 4-channel audio interface and proprietary X:LINK connection, making it suitable for a wide swath of digital DJing proclivities.

The Good: Tons of pro-grade controls packed into a small surface. Flexible layering options lets you shift between three control layers on some or all of the controls, while leaving other sections locked. Acceptable sound quality with adequately high output levels in both the headphone and main outputs.

The Bad: No hard level settings for the headphone or main outputs. No booth outputs. Maximum utility requires the patience for custom MIDI mapping.

The Bottom Line: You get fully MIDI-programmable channel strips and a button grid with three possible layers of functionality in a professionally constructed controller with a 16-bit/48kHz 4-channel soundcard. Serious working DJs will appreciate the powerful custom workflows they can construct after putting the time in to program their own mappings. 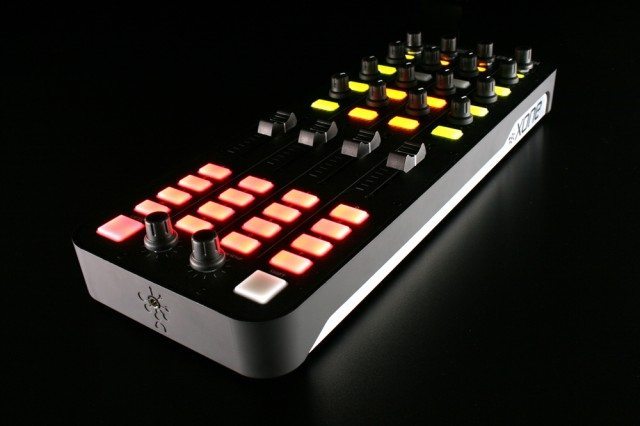 While larger than the Kontrol X1, the Xone:K2 incorporates more controls and is still built specifically to fit in the DJ booth alongside a pro DJ mixer. It’s roughly the same depth as Allen & Heath’s flagship DB2 and DB4 mixers. The K2 comes with a durably-padded, zippered black carrying case that doubles as a stand. Zip off the top and set the K2 on the back of the case bottom. There are indents on the bottom of the case for the K2’s four plastic feet, so the height of the K2 on the stand matches the height of the DB2, DB4, and many other pro DJ mixers.

A soft plastic outer shell encases a coated metal faceplate on the K2. All of the nutted pots and rotary encoders represent professional build quality, and the nutted construction of the knobs means the the inner circuit board is protected more against outer trauma to the knobs. The four 60mm-throw faders possess the signature Allen & Heath smoothness, and their tops are indented generously, making them a pleasure to use.

In addition, the 30 rubberized buttons feel fantastic. They are soft-touch LED rubber buttons with a click, yet they are firmer and feel more robust than the looser buttons on the Kontrol X1. In short, despite the plastic casing, Allen & Heath maintains its usual high standard of build quality on the Xone:K2. 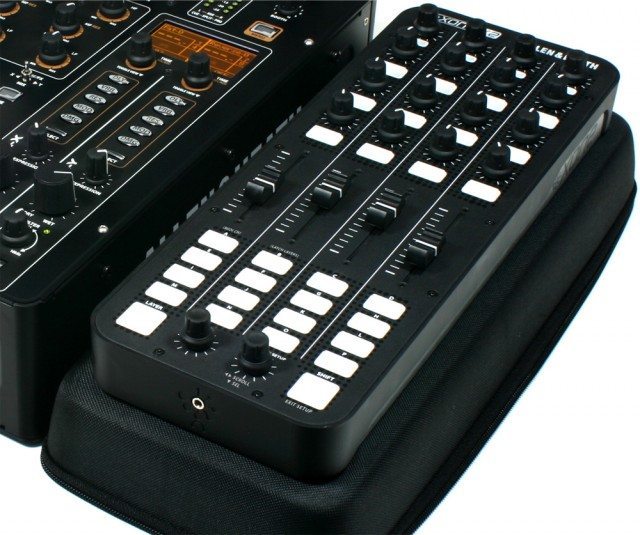 The K2 serves up 52 hardware controllers. When you factor in push-button encoders and three possible layers of functionality (more on that later), that’s 171 possible MIDI commands.

From the top down, the control segments break out like this:

• Layer and setup controls. The bottom row of two LED buttons and two push-button rotary encoders deals with layer switching, setup mode for selecting the MIDI channel and layer mode, or can be assignable if layering is turned off.

There are three possible layers to the K2 control surface that you can assign to MIDI, and the LEDs will glow red, amber, or green depending on what layer they represent. There are also four Latching Layer modes that determine which sections of the K2 will respond to layers and which sections will stay locked to one layer. Let your mind run wild with customization possibilities here. That’s what the K2 is all about.

To set a Latching Layer mode, you must enter setup mode by holding down the Power On/Setup encoder down on an unplugged K2, and then plugging in the USB cable to a computer to power it up. That enters you into setup mode, and using the Setup encoder with the Shift button to enter Layers mode, you can scroll these five Latching Layers states: 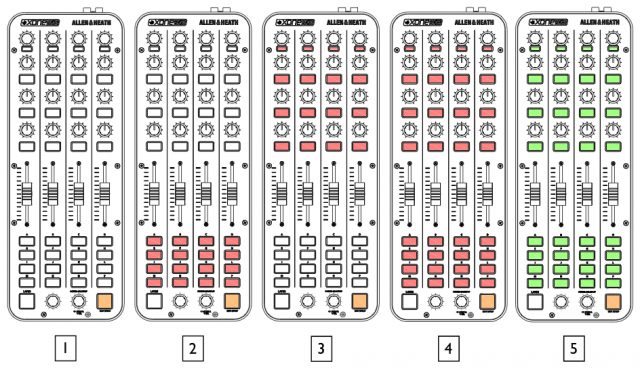 1) Latching Layers is turned off. This is the default mode.

2) Only the four rows of 16 Switch Matrix buttons respond to layers, while the rest of the K2 is locked.

3) The 16 pot switches on the top half of the K2 respond to layers. That’s the four encoder buttons across the top (represented by the top row of LEDs) and the three rows of four LED button switches under the knobs.

4) “All Switches” mode: the 32 total switches from modes 2 and 3 respond to layers in this mode.

5) All of the K2 controls respond to layers in this mode. The faders and pots support “soft takeover” when switching between layers to prevent sudden parameter jumps. For software that supports soft takeover, such as Ableton Live, the control value for a different layer won’t change until the pot or fader moves to the current parameter’s position.

Still confused as to how Latching Layers behaves? Check out the below video from Allen and Heath themselves that gives a quick overview of the concept.

While the Xone:K2 was made expressly for you to customize it to your own workflow with your own mapping, you may well find a preset mapping that works to your liking. As of this writing, there were several Traktor Pro 2 mappings and an Ableton Live Project setting available at Allen & Heath’s K2 product page, and no doubt many more will soon be popping up on forum sites after the product launch.

Allen and Heath have also confirmed that official mappings for Virtual DJ, Serato Scratch Live, MixVibes and Mixxx are currently under construction.

Although the Xone:K2 is probably best for those not intimidated by making their own mappings, the ones that are out there right now serve well enough to get you started using the unit quickly, especially in Traktor, where creating a mapping feels more laborious than in Ableton Live or other DAW software. Just import the TSI file into Traktor, check your Audio and Output Routing settings, and you’re good to go.

Allen & Heath currently include Traktor mappings for sample deck control, an X1 emulator, a loop/FX controller, and an all-purpose setting for using the K2 as a lone Traktor controller. However, when you’re ready to take the leap into custom mapping, there are some handy Traktor mapping videos at Allen & Heath’s site as well as some other useful setup/use case videos.

(Editor’s Note: On the Maps section of the DJTT site, we’ve already got 10+ custom mappings for the K2. Check them out!) 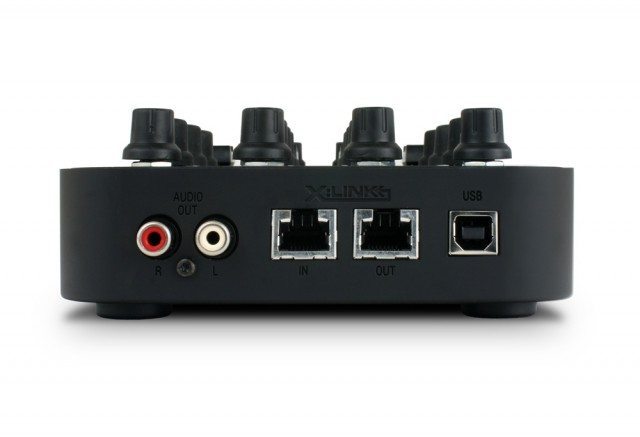 The Xone:K2 only supports audio at 16-bit and 44.1 or 48kHz, not 24-bit/96kHz. So while hardcore audiophiles may not appreciate that, the K2’s sound held up well and compared favorably to other DJ oriented soundcards out there, such as the Native Instruments Traktor Audio 6 and the soon-to-be-discontinued M-Audio Conectiv.

One of my biggest gripes about the K2 would be the lack of any hardwired audio controls for the audio outputs. The 4-channel configuration sends channels 1 and 2 out of the front-panel 1/8″ headphone jack, and channels 3 and 4 out of the back-panel RCA stereo outputs, but there are no level controls for either output unless you program software level controls for them into your K2 mappings. That makes using the K2 for audio less convenient for sure.

As it stands, several of Allen & Heath’s suggested use cases for the K2 involve not using it for audio at all or routing one or both of the audio outputs into an external mixer.

The Xone:K2 sends MIDI, audio, and derives power over USB. The unit can also be powered by the X:LINK (RJ45/ethernet) port, which is a proprietary connection for linking two K2s together or for linking one or two K2s to an X:LINK-supporting Allen & Heath mixer, such as the DB2 or DB4. However, only the USB port shuttles audio, so if you use X:LINK to connect two K2s, only the one connected by USB will transmit audio. There’s no doubt that X:LINK serves a worthy purpose of letting you conveniently sync up K2 units to each other or to a mixer while only using one USB port on a computer, I only wish that it was an open standard that other gear could adopt as well. 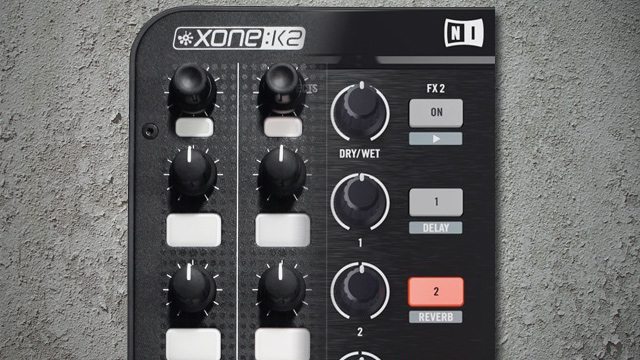 Judging from the extensive conversations on DJ Tech Tools’ forums and other venues, people seem to have a pretty good idea of whether the jogwheel-less Xone:K2 will fit into their setups or not. Generally, although you could track down a pre-made mapping that works for you, the K2 was not really created for the newest of the newbies. It’s a highly customizable MIDI controller for those who want to customize it highly for their own particular purposes. In that way, it’s can be incredibly liberating once you take the time to program it.

One or two of them together could easily suffice for many digital DJ’s needs, or the K2 is also a hell of a supplementary controller. You could add it to a Kontrol X1 to incorporate audio and many additional controls for a super compact DJ rig, or drop it into a busy remixing/production studio as an Ableton Live clip grid and channel strip controller.

The audio interface differentiates the Xone:K2 in an important way, but it also necessarily jacks up the price a bit, which may be a concern for those who would only use it as a controller. At $299, it’s about $100 more than a Kontrol X1, for which you receive a 4-channel audio interface, more controls, and most importantly, full MIDI customization for any MIDI-supporting software, be it for DJing, VJing, music production, or lighting.

However you may use it, the Xone:K2 provides a ton of flexibility and possibility. It brings the pro-grade construction and playable feel; you bring the creativity and vision.