In a move to open up the world of boutique controllers to the masses, Livid Instruments has recently unveiled its latest controller, the OhmRGB Slim. The Slim is essentially a more compact version of their flagship Ohm 64 RGB, repackaged into a slim gunmetal enclosure, and ditching the external MIDI and expansion ports. It comes with full support and templates for Ableton, Traktor, Arkaos and more. Read on for a full review of the unit! 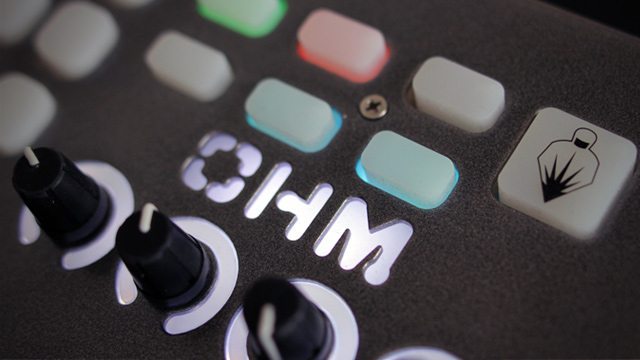 Over the past few years, Austin-based Livid Instruments has emerged as a notable player in the world of high end and boutique MIDI controllers. With the flagship Ohm 64 RGB model going for $699, it’s an exclusive product line with high profile users from Herbie Hancock to Richie Hawtin. And while there’s no doubt it looks and plays great, the large size and high price tag have ultimately kept it a small scale product in the world of MIDI controllers.

In order to simultaneously bring the cost down and make it more compact, Livid now offers the OhmRGB Slim. The controller, which features most of the same functionality as its big brother, is retailing for $599 and suggests a more practical solution to today’s touring producer/DJ. Its relatively compact size and lightweight chassis make it much convenient for flights, and it’s also easier to find room for it on a typical DJ table. 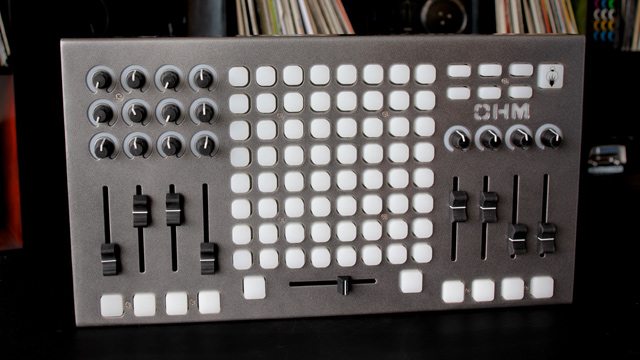 The controller looks good, and is very light and portable. It definitely makes the Ohm series a more accessible and practical purchase for the average DJ or producer. The knobs feel super smooth, the faders have a very long throw and are also very nice to use. It has lots of buttons, knobs, and sliders and feels well constructed.

Using their default script for Ableton, I was impressed by the level of integration they’ve achieved with Ableton. You barely even have to look at the screen at all when you’re using it. It is very intuitive and I was able to quickly dive in and get to playing. It also opened up some new ideas for playing my sets live, and allows for easy recording, triggering of loops, and mixing.

WHAT COULD BE BETTER 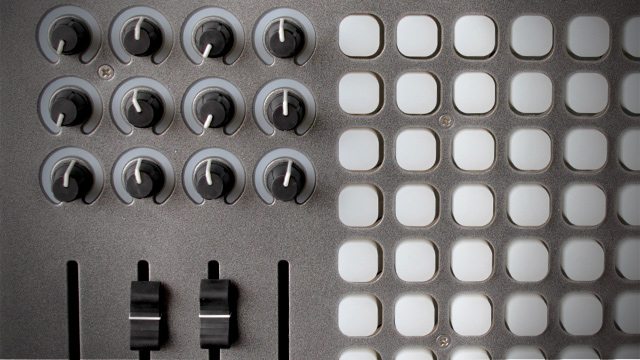 The central button grid feels a bit mushy. It’s not optimal for finger drumming or quick triggering. More solid and stable feeling buttons would be a great upgrade for future iterations. We happened to notice that on the unit we had, there was a significant “wobble” to the buttons; even when pressed, you can push the button to the side and it almost feels like a second press of the button. You can see part of the cause in the above photo, especially on the left two columns- the faceplate doesn’t align with the buttons to hold them center, allowing them to move to the right.

The crossfader on the model we got was very firm, but Jay from Livid let us know that for production models, the Ohms all have loose, custom-made crossfaders on them.

A caution about protecting the Slim: at the first gig I brought the unit to, one of the faders ripped off while putting it in my bag. Because they sit relatively high above the case and have narrow caps, it makes them a bit more vulnerable. I was able to retrieve the cap, but had to bend the fader back into place and now its a bit crooked. We’d recommend finding a really good case for the unit to prevent similar accidents!

With the release of the OhmRGB Slim, Livid has made an appreciated move towards making their products more available to the general public. Its slim profile, lightweight design, and sturdy build make it more portable and accessible than the original Ohm, and the LED integration with Ableton is well thought out. It’s a good option for the producer/DJ who wants to do something a bit more complicated than traditional DJing and encourages a fusion of live performance with traditional mixing. The metal chasis makes it feel like a serious controller but some of the components including buttons and faders don’t quite fit in the rugged performance class.

The Slim interfaces with Ableton through a free script which is available on Livid’s blog. Once installed, the Slim’s RGB’s display feedback from Ableton in realtime, rendering functionality similar to the launchpad or any of the Akai APC line. It operates in three modes, which they’ve named, “mixing, playing, and DJ’ing.” The script is a great starting place, but remember, you can always re-map anything and it will overwrite the default assignment. Here’s an explanation of the various modes… 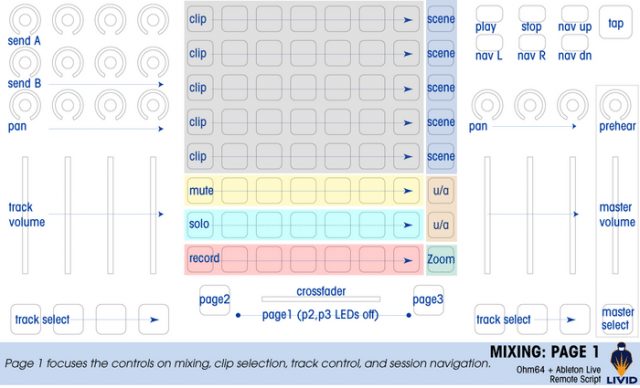 The “Mixing” mode of the Slim gives you the ability to launch clips and scenes, as well as offering track mute, solo, and arm for each channel. It’s a nice change up from the Launchpad, which does not allow you to launch clips and arm/solo/mute tracks in the same window. I found this particularly useful for live vocal looping and glitching, or any time when I needed to quickly arm the track and begin a clip at the same time. Having the solo and track mute control in the same window was great for jamming and playing live.  The faders assign by default to the levels of the first eight tracks, with the above knobs controlling pan and sends. Personally, I find pan to be pretty useless in a live / DJ setting, especially since quite a few club PA systems run in mono. 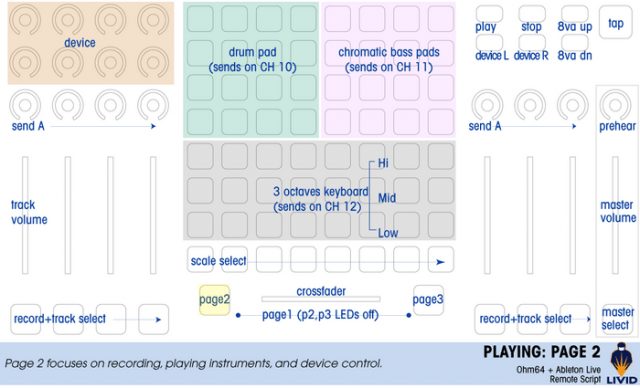 The “Playing” mode creates subgroups on the button grid that send on different MIDI channels and are meant to play drums and instruments. It also switches the knobs to “device control”, which allows for adjusting synth patches or effects. This mode was similar to the Novation Launchpad’s “User 1” with the exception being that Livid’s offering creates subgroups for playing multiple instruments. I did not attempt to use this mode because I felt the buttons were better suited for clip launching. I’ll leave the quick triggering and instruments to my MIDI Fighter 3D (worth nothing: I found the 3D and the Slim played quite nicely together). 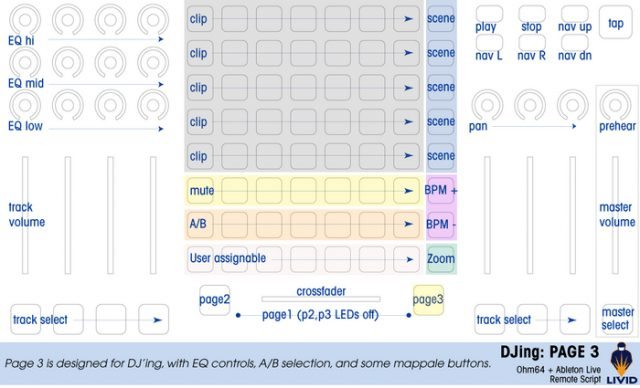 Livid’s “DJing” script revolves heavily around the use of the Ableton crossfader. It provides clip and scene launching much like the “Mixing” mode with the main exception being that instead of arm and solo, you get “user assignable” and A/B (for using the crossfader). I found this to be the least useful of the modes, especially since I’m not really a “mix with crossfader” kind of DJ.

The OhmRGB Slim, like many other Livid controllers, has a great community of support. One of the advantages to that is the interesting mappings that come out of it – for example, check out the above video for a Traktor mapping on the Slim.

Additionally interesting is the new Will Marshall template for the Slim – Will Marshal was one of the brains behind the original Ill Gates APC 40 Ableton DJ template.

It’s also worth noting that Ill Gates himself is working on a sweet template for the the Slim that he says is “not quite ready!” but that will be available soon, and I’m most certainly interested to check it out. 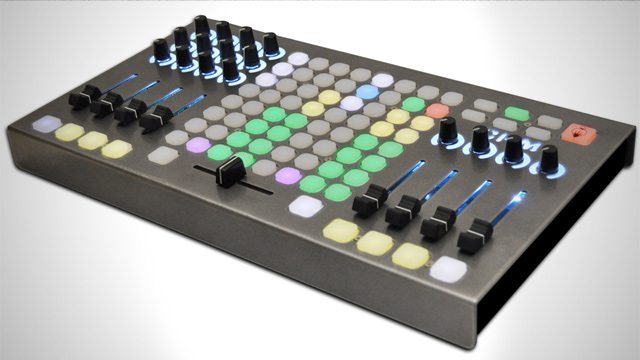 Think that the Livid OhmRGB Slim might be the controller for you? Learn more on Livid’s site, or purchase one today.