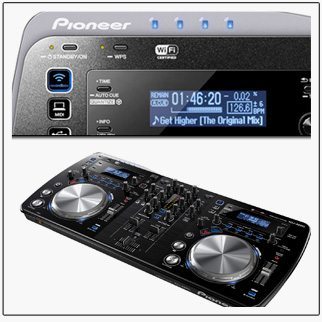 Forget CDs, forget records, and forget controlling tracks playing on your computer. Instead, imagine a piece of DJ kit that’s loading your tracks straight from your wireless capable devices – your cellphone in your pocket or the iPad in your DJ bag. That’s what recently announced new DJing device, the Pioneer XDJ-AERO, aims to do.

With a similar built-in workflow system as a connected pair of Pioneer CDJs and mixer, the full-system model of the XDJ-AERO is reminiscent of Stanton’s all-in-one kit, the SCS.4DJ system announced at BPM 2011. In addition to wirelessly loading songs from your smart devices via a Pioneer-built app, the unit features a standalone two channel mixer, a direct-to-USB drive .WAV file mix recording feature, two “automatic mixing functions”, and onboard effects:

Naturally, the unit is also capable of also accessing tracks via Pioneer’s Rekordbox track preparation system off of a laptop nearby, and all of this is over a local 802.11b/g/n wireless network or an ad hoc hotspot that it creates itself. Of note, the only file formats supported via Wi-Fi are MP3 and AAC – not sure if this is an app limitation or just a bandwidth concern – but it can also accept more formats over a USB drive or connection to computer.

The Pioneer XDJ-AERO will be available “late August” with a MSRP of $1,399.

Is rekordbox 6 on the way? First signs of a “new…

Read this before updating your DJ computer to Catalina! Wait…