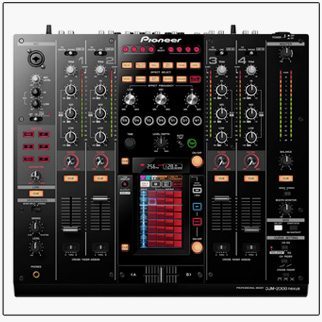 Sometimes it’s lonely at the top. Pioneer’s premium flagship DJ mixer, the DJM-2000, has been out of the news this year as Pioneer’s other flagship products (namely the CDJ-2000Nexus, RMX-1000, and the DJM-900Nexus) have all been the center of attention. Today, Pioneer has announced that the hardware’s getting an upgrade to a second edition – the DJM2000Nexus.

Cosmetically, the unit looks very similar to the DJM-2000 first edition, only with silver isolator knobs, white LEDs, and nicer fader caps. The unit also sports a networked switching hub, that allows multiple versions of Pioneer’s Rekordbox library software to connect to the mixer using Pioneer’s Pro DJ Link. This hub also allows music plugged into a connected CDJ to be shared across any of the players.

One of the most interesting new features in this launch are four new modes for the touchscreen integrated into the mixer that allow touchscreen control of beatslicing, sidechaining, frequency mixing, and even a MIDI-output mode for controlling DJ software on a computer:

Of course, it wouldn’t be a Pioneer mixer launch without a cool video – check out MONSTA chopping up live vocals using the new touchscreen modes in the video below:

The Pioneer DJM-2000Nexus will be in stores within the month, coming in at an expected premium MSRP of €2,299 / £1,989 / $2999. However, there’s good news for all of the DJM-2000 owners already out there- it looks like Pioneer has confirmed that all of the firmware-based changes will be available for the older unit as well, in an update due out at the end of November.