With the new UC3 (third-generation universal MIDI controller), one-man German company Faderfox may have dished out the tastiest bite-sized morsel of controllerism since its founding in 2004. Its included Ableton Live setting only scratches the surface. Go deeper, and the UC3’s 17 physical controls are multiplied by 8 Groups per Setup, and 16 saved Setups. That’s a whole lot of control in one tiny, lightweight box – read on as we put it through the ringer for a world exclusive first review. 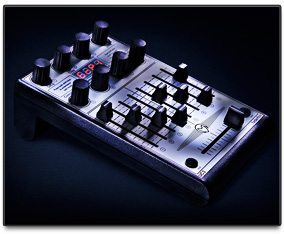 
The Good:  Sixteen stored Setups, each with 136 possible commands spread across 8 Groups. Very compact and light. Minimal display does an adequate job in the fairly deep Edit mode. Compatible with iPad (with adapter). Ableton Live 8 setting included. High-res control option for the encoders.

The Bad: No programmability for the push function of the encoders. Lightweight plastic construction *could* be a liability down the road. Closely-spaced faders may perturb big-handed users.

The Bottom Line: This straightforward sub-compact universal USB MIDI controller does the job of multiplying its 17 physical controls with 8 Groups per Setup and 16 saved Setups. Its an excellent unit for supplementing your rig in one of the smallest and lightest ways. What may be considered a premium price buys you universal operability and a generous memory for storing your MIDI maps.

The UC3 stores 16 Setups (or presets) in its internal memory. Each Setup has eight Groups of controls within it, so for each Setup, you can map eight instances of the the UC3’s 17 controls—a total of 136 possible commands per Setup. 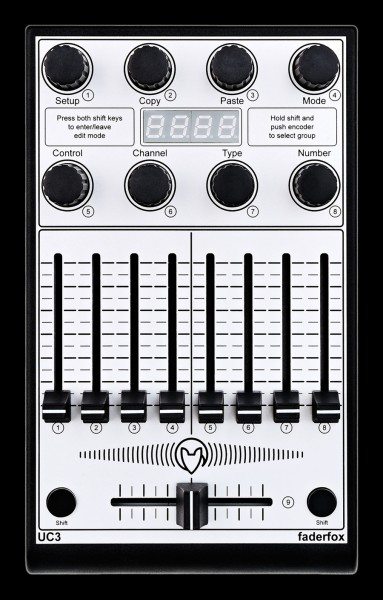 From the top down, the control segments break down like this:

A single USB jack on the back provides connection to a computer or iPad, as well as power from a powered USB computer port or hub. The base of the unit is hinged on one end in a short L-shape, which adds some size, but also angles the surface up a bit, which some user will find preferable to lying flat.

With such a small footprint, it’s great that Faderfox still packs 136 MIDI controls into each of the UC3’s 16 Setups. The unit also feels incredibly light at well less than a pound in weight. For that feather weight, you have to accept that the black plastic casing (with metal faceplate) may not hold up as well as more tank-like controllers will, but for now the chassis feels pretty solid. There’s no blatant bending or creaking like you’ll find in some plastic pieces of gear.

OUT OF THE BOX FOX

Faderfox has shown some extra love for Ableton Live users with a factory control surface setup included for Live 8. (Live 9 is now available, and Faderfox expects to have the setting updated by late March.) The box will also work with any other MIDI-compatible software. For software with freely MIDI-assignable controls, you may not need to use the UC3’s internal programming at all.

To use its Ableton Live setup, you just have to drop the files included on a disc into the Ableton MIDI remote script folder on your desktop, and then select the UC3 in Live’s MIDI Sync preferences. I tested it with Ableton Suite 8.4 on a Mac running OS 10.8.2, and everything worked flawlessly just as explained in the manual.

The UC3 is meant to be a supplemental controller for Live

Meant to be a supplemental controller for Live, the UC3 doesn’t try to handle all of your Live control desires, but it does cover a lot of ground. And you can overwrite any of the preset control assignments with your own designations.

In the default settings, the faders’ functions are fixed to track volume regardless of the Group you select on the UC3, but the encoders functions change according to the Group. Encoders in Groups 1-3 automap to the first eight applicable controls the the first three Rack devices of the selected Live 8 track. Group 4 is the Global group, with the UC3 encoders controlling the quantization value, track select, cue volume, Master pan, and Master volume. Groups 5-7 control the track send amount for Sends 1-3, and Group 8 controls track panning. To change the active Group, hold one of the Shift buttons and push the encoder numbered for the Group you want.

The UC3’s Live Control Surface setting is very mixer-heavy, and may not have all the kind of controls you want. But it only uses two of the 16 available Setups of the UC3, so to add more Live control, you don’t necessarily have to overwrite the factory settings (but you can always reset the UC3 to its default settings if you do).

quickly and easily added all kind of extra Live mappings

I very quickly and easily added all kind of extra Live mappings to other Setups of the UC3 using Live’s internal MIDI mapping function, and did the same inside some other MIDI compatible software with mapping functions. To change the UC3’s Setup, you have to enter Edit mode by pressing both Shift keys simultaneously, selecting the Setup with Encoder 1, and then pressing both Shift keys again to exit Edit mode. I don’t find that method to be the most performance-friendly way to change Setups, particularly if you’re trying to do it as quickly as possible on the fly, but it’s a minor trade-off for allowing to pack so many controllable parameters onto such a small device.

And if you need it later, you’ll be thankful that the Edit mode is there.

You get quite a bit of flexibility in UC3’s Edit mode. When you press both Shift buttons, a small indicator LED shows you that you’re in edit mode. From there, the encoders and the display are all you need to program the device. Pushing each encoder will bring up their menu, and then you can twist your way through the options therein.

Encoder 4 lets you choose from four Acceleration amounts for the encoder only—this is the rate at which the encoders ramp up the value as you turn them.

Finally, Encoder 6 lets you see and change the MIDI channel number either for all the controls of a particular Setup, or for individual controls.

Editing changes are saved when you exit Edit mode. If you need to reset Setups to their factory defaults, in Edit mode, hold down Encoders 1&2 until Setups 1-8 reset, or hold down Encoders 3 & 4 until Setups 9-16 reset. You can also send (backup) all Setup data to a software MIDI recorder by pressing Encoders 5 & 6 or receive (load) complete Setup data by pressing Encoder 7 & 8 and then playing back saved data from MIDI player software.

All the resetting and MIDI send/receive options are appreciated, but they don’t let you reset, send, or receive individual Setups, so taking care to program your Setups meticulously is recommended.

It’s not complicated to understand what you’re getting with the UC3, and that’s a good thing. Put simply, it’s a universal USB MIDI controller with 16 editable presets, each with 8 Groups of 17 controls per group. It also requires very little power, so you could chain other UC3s or similar units to a USB hub to save precious port space. With all those Setup memories, you could program a couple of Groups on the UC3 to supplement your control needs for every MIDI program you use, and probably still have a couple to spare.

programming of the UC3 is not intimidating after a short learning period.

The included Ableton Live 8 setting is a good starting point, and its easy to add more Live Setups for your own maps from there. For software that may not have user-friendly MIDI mapping, the internal programming of the UC3 is not intimidating after a short learning period.

One thing you don’t have in the Edit mode is programmability for the “push” function of the encoders. Nor do they send MIDI to software such as Ableton Live. Instead, holding down the encoders as you turn them lets you go from minimum to center to maximum values faster and easier. That does have its use of course, but button encoders are capable of doing much more if you have that option. 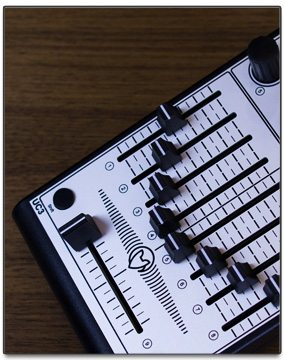 Overall, however, I would recommend the UC3 to users who feel they will really exploit most of the Setups and Groups within Setups available to them. If you were just going to use the 17 controls on the surface in a single or a couple of instances, it’s probably not worth the price that Faderfox is charging for the internal memories, Groups, and editing that’s available. Because the UC3 just hit the market, the few dealers that are selling it don’t seem to be offering discounts of the MSRP yet, however, this price for the UC3 and remainder of the Faderfox line already reflects a recent price drop for the company. So if the Faderfox fur has been tickling your fancy, this new unit may be the one to catch.

Bother our technical editor, Markkus Rovito, on his Twitter.

What do you think of the UC3? Is it worth the asking price? If so, how would you incorporate it into your setup? Let your homies know in the comments below.

Learning Synths: Ableton Will Teach You Synthesis In Your Browser