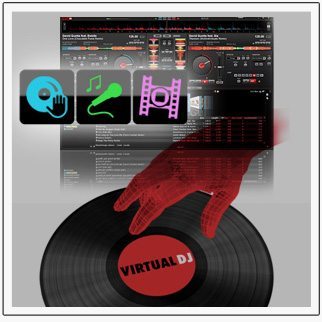 Atomix Productions is rolling out a brand new update of their VirtualDJ software this afternoon, version 7.4. The software has a number of minor updates – but the big win for users is a brand new cloud-based content streaming service wrapped into VDJ for professional DJs, dubbed ContentUnlimited. The service allows users to stream an unlimited amount of HD music videos, karaoke files, and audio tracks. While streaming audio had been available previously in partnership with Grooveshark, the two new partners added include MegaHits (formerly known as ChartBusters) and VJ-Pro.com. T

The content is available for all users in 30 second previews, but subscription plans (which is cleverly marketed on Virtual DJ’s site as “the Netflix of DJs”) for each type of content are available for different prices:

Virtual DJ 7.4 also adds a fair amount of compatibility for Windows 8, including support for multi-touch computers (read: Microsoft’s Surface), fixed a number of bugs, and has a remake of the MusicGroups service into two software features:

Version 7.4 is available for download now on VirtualDJ.com – but for those of you holding out for Version 8, they’re still working on it!