We featured SubPac’s Kickstarter announcement a few weeks back when it went live. With just four days left and already having beat their funding goal by nearly $10k, it looks like this backrest bass booster will be making a ton of home studios more neighbor-friendly. We had a chance to experience one of the prototype units here in the DJTT HQ, read on for an exclusive review from both Mad Zach and Markkus, our tech editor!

Today’s review is a special two-perspective piece on a prototype unit of the SubPac – the performance of the final manufactured unit will likely be similar but not identical to the descriptions below. Markkus is our Tech Editor and handles most of our software and hardware reviews, while Mad Zach is our artist-in-residence with a passion for serious bass explosions. 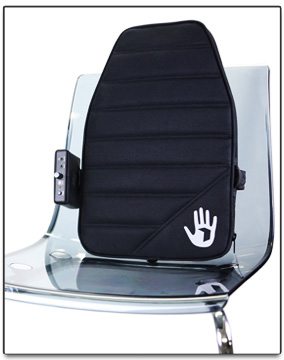 From the fiscally-democratized world of Kickstarter comes something for the DJ/producer with everything: an upholstered subwoofer that you lean on while producing, mixing, or listening to music. It may strike you as an obscure device at first; at least, it did to me. But its proposition to musical types made some immediate sense: Transfer low frequencies to the body so you can also feel the music, not just hear it. As such, the SubPac can give you a better idea of what the effectiveness of the bass in your music will be in a club environment, whether you’re mixing with a simple pair of earbuds, headphones, lousy computer speakers, or even studio-grade monitors.

When one of the first final SubPac prototypes landed at the DJ Tech Tools office for a tryout, the results hit our backs at the speed of sound. You just plug in your sound source and headphones (or monitors) to the SubPac’s AC-powered breakout box, and sit against it propped against the back of a chair or couch. It was immediately clear that the SubPac could help out with a problem that countless producers run into: “how will this track come off at a club?”

Unless you’re blessed with high-end monitors and huge subwoofer wattage in your studio (and oftentimes even then), it can be tricky to gauge how the bass levels in your music will transfer to such a boomin’ system. Some experienced producers know from trial and error how their studio system will equate to a club system while they’re mixing, but even then, the SubPac hits you with the visceral physical vibrations that you don’t really get even from a slammin’ subwoofer. Plus, if you have noise-sensitive neighbors, the SubPac can keep you mixing effectively with just headphones at all hours.

And there can be other casual benefits to it, as well, like contributing to the immersive experience of gaming. Personally, I found the vibrations against my back to be relaxing, too. There’s probably some stress-relief aspect to the SubPac that its creators, StudioFeed, could latch onto.

The first run of SubPacs on Kickstarter will cost you $350 each, so it’s not just an impulse buy, but rather a pretty sizable investment that you’ll want to have a real need for. I can testify though that the first time I played out after having used the SubPac, I wasn’t happy with how a remix I’d done sounded over the PA. I’m pretty sure the SubPac could have at least helped me shape the bass to sound better in the club.

This thing is dope. thesubpac.com 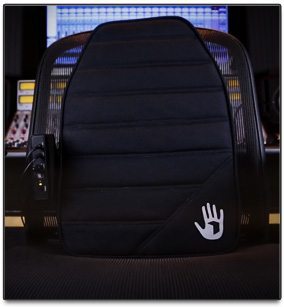 I love bass. The kind that rumbles your chest and makes you slightly concerned for your heart health. So when I “turned it up” at my little SF studio apartment for the first time, I was more than a little disappointed that not one, but three of my neighbors called the landlord to complain. Shit.

So I’ve been making due with my KRK Rokit 8s on half power and little imagination. But when push comes to shove, it’s just not as fun to make music when you can’t hear the sub, especially if you make music for sound systems.

Enter the SubPac. This exciting new Kickstarter project is aimed to bring bass to all the frustrated renters and bored gamers around the world who are looking for a more visceral audio experience.

At first it looks like one of those massage chairs that you get at the Sharper Image. But plug it in and you’re in for quite a bit more than a robotic shiatsu. The experience is unlike anything else. 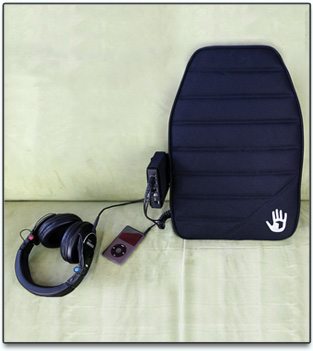 Sandwiched between your back and your chair, I would describe the SubPac as alarming, deep, and satisfying. In terms of accuracy, I wouldn’t call it a “precision device” but it’s pretty sweet and could be used to make a late night headphone session quite a bit more creative.

I tested it out on Pandora and the first thing I noticed is that Clorox advertisements have a lot of bass! Movie trailers too… Holy cow. They say the reason people get “addicted” to bass is that when sub-frequencies hit your temples it releases endorphins. The SubPac does not deliver bass to your temples – but rather to your lower back, a dangerous zone for nefarious frequencies such as the mythological brown note (so be careful).

It is not exactly silent, but rumbles a bit like a low rider with its license plates aren’t tightened all the way (the slight rattling sound). My “neighbors” at the office were still aware that I was listening to music, but it wasn’t that noticeable until the bass was up to the highest back-melting setting. I wish my real neighbors were that cool.

Overall, the SubPac is a ridiculous and awesome invention for anyone who wants a bit more bass in their urban prison and is willing to add a slim jet pack massage to their chair for hours at a time that delivers sub frequencies injected into their lumbar. Awesome.

Learn more about the SubPac on Kickstarter or on SubPac’s official site.

What’s the Deal With Bass Augmentation Devices—and Why Should You Care?