Track preparation: the decidedly unsexy aspect of professional DJing that almost always pays off in the end. Yet your prep routine may be missing a step if you’re not using Platinum Notes. This software can fix audio clipping and set your music at consistent volume levels to make mixing songs from various sources a smoother experience. Continue on to hear it for yourself.

The Bad: High price compared to other Mixed In Key utilities.

The Bottom Line: Platinum Notes effectively cleans up clipped audio and adjusts the volume of your music collection to a standard level without altering the dynamics of the tracks. It’s not a magical, one-click solution to make everything suddenly sound way more awesome. Rather, it’s a utilitarian workflow tool that many professionals have found worthy of adding to their track-preparation routine.

After Mixed In Key helped make harmonic mixing accessible to DJs with its eponymous software, the small software company based in Miami introduced Platinum Notes in 2007 with the goal of making a DJ’s digital music collection a cohesive volume, where all the audio files will be better prepared to be played together, without clipping or distortion. It both boosts tracks that have been mastered at a low volume, and tames tracks that are mastered too hot.

Six years later, Platinum Notes 4 sticks with the original plan, with some new processing and options to make the software even more flexible and yield better results. 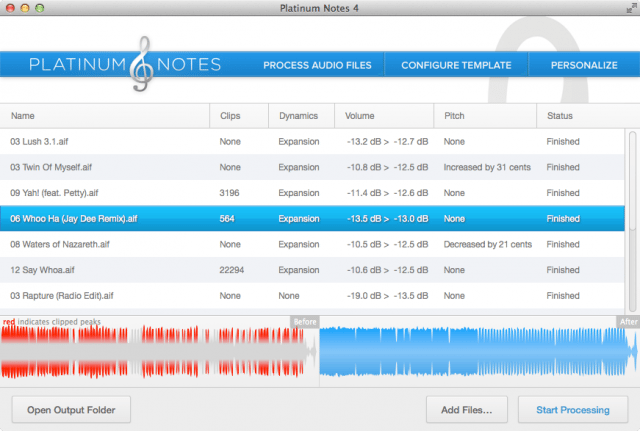 Like Mixed in Key, which detects and tags audio files for their tempo and musical key, Platinum Notes’ processes are fully automatic, with default settings that will work for many use cases, as well as some configurable options. Once you set your preferences, all you need to do is open the program, drag music into its window, and wait for the results.

Platinum Notes first analyzes track volume and uses multiband expansion and/or compression to achieve a consistent output volume, which you can configure if you don’t like the default template. Platinum Notes’ special multiband compression algorithm repairs any clipped peaks in the waveform. It also corrects pitch problems and can add a bit of vinyl-style analog warmth using an exciter processor. As a final step, the audio runs through a high-grade IRC limiter volume adjuster said to be much more professional than an auto-gain setting found in iTunes or in DJ software.

The final result, if Platinum Notes is doing what it’s purported to do, is music that sounds smoother and is loud without any clipping. The software never overwrites the original file, but rather creates a new one with an amended file name in the location of your choice; for example, “Studio Killers-In Tokyo.mp3” becomes “Studio Killers-In Tokyo_PN.mp3”.

Previous versions only output music files to WAV and MP3 formats, while version 4 lets you choose to process files as AIFF, Apple Lossless, FLAC, as well as WAV and MP3. Note that Platinum Notes reads .m4a audio files, the format iTunes sells, but does not write to .m4a format.

A new waveform display shows a more detailed look at your audio files before and after processing. Any clipped peaks show up in red in the Before view, and the After view shows the repaired waveform in blue. You can also easily see the results of audio that has beed boosted in volume (usually tracks that were mastered in the 20th century, before the volume wars really took hold).

Many of us at DJ Tech Tools have been using Platinum Notes for years, but we wanted to let you hear the results against the originals in a blind comparison and see if you can notice or appreciate the difference.

Below are batches of clips of tracks from various sources, both before and after processing in Platinum Notes 4. We don’t say whether the A or B clip is the before or after. See if you can tell on your own, and then see the answer key at the bottom of the article.

In Platinum Notes, you can input and output to the same file format, or choose to up-convert or down-convert in audio quality. It’s not feasible to cover every possibility or audio source in our examples, but we chose batches of WAV files from Beatport, 320kbps MP3s from Amazon, 128kbps MP3s from various music blogs, and FLAC files that were ripped from CDs

NOTES FOR THE UNDERGROUND

Whether you liked what you heard in the audio samples or not, the results from Platinum Notes most often sound subtle. You can adjust the settings of the compression, expansion, and warmth from the Configure Template screens if you want to. If you don’t, the most noticeable effect of Platinum Notes is the fixing of clipped peaks and the adjustment of volume, whether up or down.

This capability to quickly and automatically set your music files to a standard and consistent output level really defines what Platinum Notes is all about. It’s not too flashy or glamorous; it’s a simplified tool born of many complicated processes that — more than radically changing the sound of the music — can give you some peace of mind over the cohesiveness of your collection and maybe save you some of the hassle of adjusting gain, EQ, and/or channel level values when mixing from track to track. The software comes in particularly handy if you’re into grabbing bootleg remixes or mashups off the Internet, where the track may be mixed at a sub-professional level and rife with distorted clipping.

So far, all of this has been enough to make Platinum Notes a trusted tool on the laptops of many professional DJs. Will it make a true believer out of you?

SPOILER ALERT! Answer key for the 5 sets of Before & After clips.