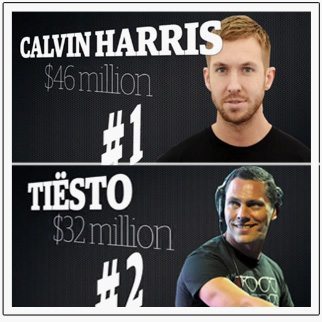 A whole year has gone by since Forbes released their first analysis of the top ten DJs in terms of monetary wealth. This year’s edition stars many of the same cast of characters at the top – with the exception of Calvin Harris who has rocketed to the top (likely all because of his collaborations with pop artists).

It’s remained a pretty solid lockup of producers – with only Pauly D on the list as a DJ who hasn’t had a major electronic hit in the last two years. Forbes does note in the article that in order to be included in the list, each person has to make at least half of their revenue from DJ gigs.

Forbes does admit that these are estimates – but tries to note all of the resources they used to calculate each of the DJ’s revenue.

Our estimates include earnings from live shows, endorsements, merchandise sales, recorded music sales, external business ventures and, in the case of DJ Pauly D, television (we included him on this list because, like his fellow Electronic Cash Kings, he makes at least half his cash from DJ gigs). Sources include Songkick, Pollstar, RIAA, promoters, managers, lawyers and some of the artists themselves.

How Much Do DJs Get Paid? Forbes Top 10 List