Behind The Mix: Kyle Hall’s Mix For Resident Advisor’s Podcast

Every now and then a DJ mix comes along that simply blows us away – the song selection, mixing, and overall production impresses on all levels. Instead of just passing the mix along to our friends, we decided to do a quick interview with the artists behind these mixes and ask them about their creative process. Join us for the first “Behind The Mix” – this one features Kyle Hall and the mix he did for the Resident Advisor podcast.

Where are you currently based?

Kyle: I live in Detroit currently. The city is definitely changing; tons of IT and startups.

Is this mix a good sampling of the vibe in Detroit right now?

What DJ gear did you use on this mix?

Kyle: I used CDs, CDJs, vinyl, cassette tape, and Boss RV5 Reverb pedal. The pedal was used in stereo on the Xone 22 DJ mixer – nothing too complicated.

Was the mix planned in advance at all? Any post production?

Kyle: Yeah it was thought out. I had a general idea of which songs I wanted to put in this mix. I added some cassette tape sounds and an automated voice to emulate the auto reverse function when listening to a cassette mix.

A lot of the tracks on this mix are classics or rare/lesser known cuts. Where do you do your crate digging?
Kyle:  I buy my records from local Detroit record shops. A lot of newer things I play are from friends of mine who run labels. Then online I use Discogs quite a bit. The best way to discover good new music is just research who made the records you already like and just follow the rabbit hole the internet takes you down.

How did you get that great low end analogue distortion throughout?

Kyle: Overdriving the cassette helped in getting that sound […] the entire mix was recorded to cassette tape to give it the fat fuzzy distorted sound I desired.

The mixing is notably smooth with songs truly melting into each other. How’d you achieve this?

Kyle: All of the mixing was recorded live; the songs I chose just really went well together. You have to be familiar and close to the feeling of the music to get that effect I guess.

Do you have any tips for new DJs that want to achieve a similar sound to you?

Kyle: Experiment with equipment and gear, and see what happens! It’s okay to break the rules when you are using hardware. You aren’t restricted by software. Possibilities are endless. 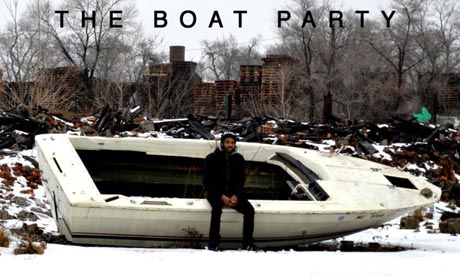 Your new album, “The Boat Party” also has a great analogue sound to it. Any stand out pieces of gear that played a critical role in your creativity on the album?

Kyle: The MPC-1000 was the centerpiece of the majority of the album. By far one of my favorite pieces of gear in my studio. I even put a MPC XLCD screen on it recently. I haven’t seen anyone else with it yet!

Big thanks to Kyle and Wild Oats for taking us behind the mix. Do you have an artist or mix that would be great for this series? Let us know!

Hot Since 82 and Ean on DJ Technology