Even though a big chunk of DJ product sales are going towards all-in-one controllers like the Pioneer DDJ-SX or the Kontrol S4, many of the DJs you will see live these days still rely on traditional DJ mixers in lieu of mixing inside the computer. Why is this? What benefits do hardware mixers have over internal software mixing and which style is right for you?  In today’s article I hope to cover both types of mixers and then some.

Before we discuss why so many DJs mix externally, what does “mixing externally” even mean?

Mixing externally is routing all decks out of your DJ software to individual channels on a mixer, usually via an external soundcard.  Each channel is summed together (gain, effects, levels) on the hardware mixer, with internal controls limited to transport and effects are used.

Mixing internally is summing all of the channels inside of the software and sending the combined audio as a stereo mix out to speakers and/or headphones, often through a controller’s built-in sound card.

REALITIES OF PLAYING IN A CLUB

As with any gear purchase or workflow decision, it makes sense to think about your most common use case.

For many DJs, home sets mixed with the occasional mobile gig are a common stage, however almost everyone finds themselves in a bar or club at some point. For the purposes of this article, we will be focused on the demands and needs of those environments.

In a club, the monitor and master sound systems are already pre-wired into a house mixer that is usually placed dead center in the booth. Often the most ergonomic, convenient, and sound system-friendly way of playing a set is to play off of that mixer.

If your setup is modular and can use any hardware mixer as the center console, then you can easily adapt to most club environments without requiring all of your own gear at every show.  While many top acts request their own specific brands and models of mixers, you will almost always find a good mixer on the rider.

While the deck of choice has evolved from turntables to CDJs, and now controllers, one element still remains relatively constant – the stand alone mixer. There are some examples of all-in-one controllers such as the Pioneer DJJ-SX or Traktor S4 in use on major stages or clubs, but they are the exception rather than the rule. While being more affordable and convenient, the S4 and related devices are usually spotted at small bars, mobile gigs, and most of all, in the bedroom. This makes perfect sense, in those environments all-in-one internal mixing is often preferred. There are, however, many instances where external mixing can be advantageous.

Using an external mixer means that you’ve got clear dedicated hardware control and independent outputs for everything imaginable. This means routing to the booth, record outputs, master speakers, and headphone jacks – all with clear related volume control.

Controllers tend not to have a dedicated output for everything because of the added complexity and cost they require. These outputs (especially the headphone) can often be quite a bit louder on full-sized mixers due to the fact that they always have full power. Many small controllers, like the Traktor S2, are forced to compromise on output levels due to the fact that they run on USB power alone.

Dedicated full-size mixing controls on a well designed surface usually beat out controllers (especially some of the smaller ones which compromise performance space for portability). Having proper space between all of the faders and EQ are critical to keeping a good mix and feeling comfortable in the heat of a set. Many mixers, like the Pioneer series, have their own built-in hardware effects that make it really easy to add dynamics and flavor on the fly with complex routing possibilities. One example I love putting an echo post crossfader and then using the fader to cut out the track, leaving a nice echo trail behind. Try to set that up in DJ software!

When mixing externally, the potential for experimentation with FX units and inputs is endless.  Many mixers have a full FX send/return, meaning that the world of dedicated effects hardware is wide open. A few potential uses include:

Additionally, the microphone inputs and options tend to be much more robust and usable on a “real” mixer than on a controller. With levels, EQ, and sometimes a “talkover” feature (ducking) – mixers are almost always more microphone friendly.  This mic input is then routed directly to the master output for zero latency. With all-in-one controllers, the mic is often routed through the software, creating latency as your voice makes the roundtrip in and out of the laptop.

Not All Mixers Are Created Equal: Summing

On most analog mixers, the audio headroom and forgiveness for distortion is very high. This makes it possible to mix four decks together without the final mix sounding crunchy and cramped for space. Running four decks internally can get messy very quickly if you don’t keep a careful eye on your levels. Technically speaking, almost all digital mixing (in the computer) has a wider dynamic range and should sound better if audio levels are kept in check. That last part is the kicker – how many DJs do you know keep their levels in a reasonable range? Let’s be honest – in the heat of the moment, and with ear fatigue, DJs almost always end up in the red. This is where the gentle forgiveness and sometimes unique sound of analogue summing can be good.

Traktor attempts to help you out as well with a master limiter that gently compresses distortion. Read about this and other unknown settings in this article.

The problem is that analogue is almost always much better at handling distortion. True analogue DJ mixers, like many early Rane products and the Xone 92, are very forgiving with gentle analogue distortion and compression on each channel. Sadly, this argument starts to go out the window for many modern mixers since most consoles (like the DJM series and all new Rane mixers) are actually mixing digitally (just like Traktor) allowing them to use the fancy digital effects that you all love.

In some of these cases DSP can be really good and some digital mixers offer good headroom AND audio forgiveness to the drunk DJs that slam the reds (the Rane TTM-68 is a great example). Other mixers are less audiophile friendly, but with many great features they still find their way into most clubs. The DJM-900, for example, is notoriously crunchy to the ears of picky front of house engineers, but is loved intensely by DJs around the world.

Choosing to mix externally gives you the ultimate opportunity to create redundancy in your setup. By separating critical systems (the soundcard, the mixer, and the controllers), you get a number of big wins:

It’s true that buying an all-in-one controller will often save you quite a bit money – which is why so many casual DJs start out with that type of solution. Just remember what your grandfather used to say: “you get what you pay for!” 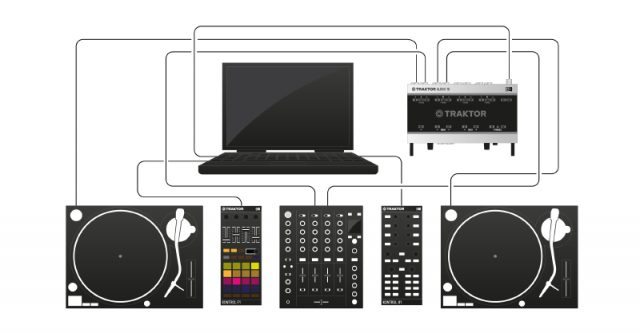 Especially if you have a modular setup, the complexity of wiring all of your channels to a mixer can become a big challenge.  One way to make this process easier is to construct a custom audio or USB snake. Another way to benefit from mixing externally while GREATLY simplifying the setup process is to use mixers with built-in USB sound cards which allow you to route digital outputs from the computer directly to each fader.

It’s way easier to record sets when mixing internally – just turn on your DJ software’s mix recorder and you’re good to go. When mixing externally, you’ll have to run an external stereo pair back into your software. Some USB sound cards have issues handling this much bandwidth. Always test your sound card while recording in this fashion before playing out to make sure you don’t encounter any stuttering or latency.

External mixers are mixer height (around 4.5 inches) – which means that if you want to use other controllers along side it, you will want to raise your controller up to mixer level for ergonomic reasons. Accomplishing this can mean hauling yet another piece of expensive gear with you on the road.

Additionally, mixers just aren’t that portable. You can’t throw it into a bag and jet off to your friend’s impromptu house party.

Practice On One Mixer, Play On Another

The mixer you have at home isn’t coming with you to every gig most likely, and unless you’re a big star, requesting a specific model might be out of the question. You’ll have to get good at using all of the main types of mixers found in clubs (Xone:92, DJM-800/900s, and Rane 57s continue to be the most common in our neck of the woods).

Look out for a follow up article next week where we will offer some affordable external mixing setups. Have experience mixing internally and externally? Tell us what your preference has been with each of these setups.