Four hard-working DJ TechTools staff members and three volunteer reporters took on the sights, sounds, and smells of NAMM 2014 in the hopes of finding the most interesting and inspiring products of 2014. If you have any use for amazing DJ effects, deluxe DJ controllers, game-changing drum programming software or a next-level DAW, you’ll want to read and watch our findings now.

Another NAMM has come and gone in a flurry of competing sound systems, faded rock star glory, and the wafting aromas of fog machines and booze. This year we saw a lot of really cool gear that may keep you inspired to play music through the year. Here are the most notable products we saw from 3 categories: DJ Hardware, Production Hardware, and New Software.

Check out our full coverage of the DDJ-SZ here

What We Like: Both pairs offer a very comfortable over-the-ear fit, and that design also helps to isolate outside noise. The swiveling ear cup design felt great to use. With the phones over the head, you can twist one ear cup to rest on the head behind the ear, for one-ear monitoring, or with the headphones slung around the neck, one of the ear cups can bend upward for comfortable, quick bursts of one-ear monitoring.

We will need to do more extensive testing, but upon our brief tryouts at NAMM, these headphones offer satisfying clarity in the low-, mid-, and high-frequency ranges. The NAMM show floor gets quite loud. Not as loud a club, but still, the HD7 DJ and HD8 DJ appear to be quite capable of cutting through noise and isolating some degree of outside sound so that you can hear what you need to for your mixing.


The detachable cables can plug into either ear cup.

The HD8 DJ also comes with what felt like very durable metal reinforcement parts. The ear cup swiveling on the HD8 also seems like it may be adjustable to be as tight or loose as you want it.

What’s Missing / Needs Work: Unlike the HD 25 II that inspired their sound, these headphones aren’t designed with completely user-replaceable parts.

Just about anything you do with the RMX-500 is gold. There are no throw-away effects, and everything syncs up to the incoming tempo with quantization for your actions. The two knobs work the effect wet/dry mix and effect parameters when you press and twist them.

It will come in extremely handy as a plug-in for producing tracks or DJ sets from a computer, or as a supplementary MIDI controller. It’s available for pre-order at some online retailers now for $399, so you get a lot of what you’d use for the RMX-1000 for at a much lower price.

What’s Missing / Needs Work:  You don’t get all the same effects or the SD card slot that the RMX-1000 has for loading customized settings from desktop software. Nor do you get the RMX-1000’s touch-sensitive X-Pad or its level meters.

Read more about the RMX-500 and watch a walkthough in this article.

Remember when DJ-Tech made the weirdest stuff ever? Those days seem to be firmly behind it. Now you can spot some of the biggest OG’s of the scratch scene — like Shortkut, Babu, and QBert — drooling over the new models at their NAMM booth.

We’re all for the integration of MIDI control with scratch mixers, and at a price of $239, the big question concerning the DIF-1M  is: could it really be that great for such little dough?

Another thing we love: crowd-funding of gear. In the case of the TRX Scratch Mixer, you can only scoop it up as a benefit of supporting QBert’s upcoming album, Extraterrestria, at a price of $500. There were about 180 of a run of 200 left when we published, and you have until Feb. 15 to claim yours.

We’ll be interviewing QBert very soon at DJTT HQ showing off the new TRX scratch mixer – keep an eye out!

What We Like: Gemini has stepped up its controller game recently with offerings like the G4V. There’s a viable mission behind the Slate and Slate 4, which is to offer a very compact and portable, yet well-rounded controller, to complement the ever-more-slender, solid-state computers that are gaining ground these days. The prices might indicate a compromised controller, however, you still get must-have features like the 8 multicolored pads per deck, dedicated filter control per channel, FX section and a built-in soundcard.

What’s Missing / Needs Work: In making a slim, light controller that you can carry around pain-free, Gemini also went with a plastic chassis that’s not really the most confidence-inspiring. The headphone output is a single 1/8-inch jack.

What We Like: The re-designed Xone:23 updates the Xone:22 with a better look and a more ergonomic design that puts the mic input on the top and both headphone outs on the front. Each of the four inputs has its own level knob, so you could have 4 inputs going into the mix at once if you like. There’s also an option to mod the phono inputs to make them line-level.

What’s Missing / Needs Work: Instead of a custom AC adapter plug, we’d rather have a standard power supply cord for easy replacement. Rather than separating the effects loop from the filter on each channel, the filter must be active for the effect to route to a channel.

Read our full in-depth piece on the Xone:23 here.

What We Like: The sound of Universal Audio’s interfaces and plug-ins makes people into believers very quickly after they first hear it. With the Apollo Twin, you get a compact and efficiently designed interface with the great audio conversion, 14 bundled plug-ins, and onboard DSP processing for an unprecedented price. Universal Audio has many exclusive rights and/or access to classic high-end analog gear modeling, and its emulations of pieces such as the LA-2A audio leveler, 1176 limiting amp, Pultec EQP-1A equalizer, and others are some of — if not the — best you’ll hear.

Apollo Twin houses its included plug-ins, as well as any other UA plug-ins you purchase, in the Console mixer application, which accepts a DAW channel through a virtual channel of the Apollo Twin. The Console provides a tidy mixer environment for working with the plug-ins and shows you the processor load on the UAD DSP chips, so you can print an audio track when it’s loaded. Pressing the Apollo Twin’s big hardware knob cycles through controls on the Console, giving you easy access preamp functions and other key controls.

What We Like: The Elektron Rytm is a completely analog drum synth, and it really shows in the sounds produced. There’s an impressive feature set that makes it a solid choice for both studio work and live performance.

Read our full thoughts and impressions in this full article

If you’re a fan of classic-sounding analog beats, it’ll be worth it in the end. Watch a performance we captured by Elektron employee Cenk below:

The Arsenal software companion to TFP

What We Like: With its included software, the Trigger Finger Pro plus any DAW software equates to an extremely fast and painless way to translate your beat or musical ideas into recorded tracks. The Roll button for sequencing drum fills is a nice touch, too.

The Trigger Finger Pro feels more robust than its predecessor; it includes an aluminum faceplate and a detachable, 3-position metal stand for angled use. It can also jump in and out of MIDI mode with the touch of a button, so it’s a tool that you can use it to produce tracks either in the studio or on the go, and then it doubles as a live tool for your performances.

You know that if you’re confident enough to unabashedly rock out on a keytar, you’re ready to hit the stage. When you do, you’ll enjoy solid Korg analog modeling sounds, fast access to your favorite sounds, a vocoder, and best of all two touch ribbon controllers — a short one for the left hand and a long one that stretches the length of the keyboard in front. With that you can play a specified range of notes and scales, or use it to control the filter or pitch in various ways.

When plugged in over USB, you’ll have detailed access to tweaking the sounds via the software editor.

Mostly, the RK-100s Keytar is just a lot fun, if you have about a grand to spend on that kind of thing.

It’s simple! Electronic Music school Dubspot wanted a simple MIDI controller for their students – so teamed up with Livid Instruments for the task.

Read our full thoughts on the DS1 in this article.

Serato’s Pitch ‘n Time DJ expansion pack for Serato DJ integrates studio-quality technology into the Serato DJ software, allowing users to easily speed up or slow down tracks to extreme tempo values, while ostensibly maintaining its key perfectly, with the highest quality and definition of any available software.

Read More: about Pitch ‘n Time in our article from yesterday

BreakTweaker is an incredible beat-oriented VST instrument designed by DJ/producer/composer BT the breaks the mode of traditional step sequencers. You can stretch each note in the sequence to any length, and then apply MicroEdits to them.

Read our full thoughts in this article – or watch the intro video below: 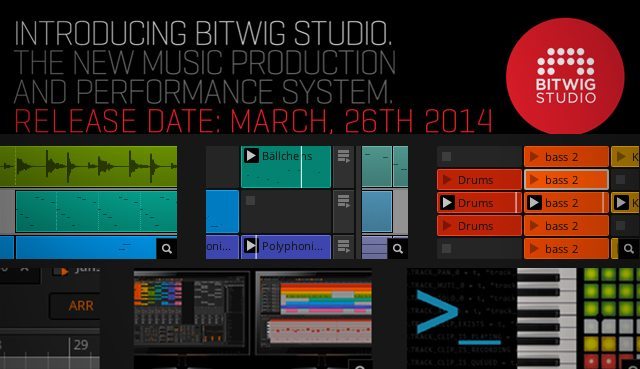 At NAMM we got first-person looks at Bitwig Studio and it’s integration with controllers from Novation, Livid Instruments and Nektar. There’s a lot to process – so check out our full thoughts on the software in a near-launch state in this article.

As rumored, Bitwig looks extremely intuitive and has many unique and impressive features allowing for faster workflow than any other DAW. Although the software hasn’t been released yet, the attention it’s garnered is well deserved. Bitwig Studio is successfully combining many different aspects of other popular DAWs and improving upon them.