How to Sync Visuals Using MixEmergency and Traktor

Whatever style of music you play as a DJ, whatever kind of crowds you play to, visuals will always be a big part of the experience you present. That doesn’t have to mean video—a blacked-out room with a solitary strobe provides as much of a visual statement as a 40-foot video wall—but a well crafted video and graphics show can be breathtaking if done well. Today we’ll show you how to get started with MixEmergency and Traktor.

For a long time (about four years) I was a video DJ—specifically, a DJ who played music videos. I would spin h.264 video files in Scratch Live, playing back the visual aspect via Serato’s Video SL (now Serato Video) or Inklen’s MixEmergency plugins. Dropping a big new track while the video plays on a massive screen, or a clutch of flat screens, felt rather cool, especially as I was able to cut, mix, and blend the videos in exactly the same way as regular audio. Where there was no video for a track, I had a brace of visual loops to play alongside the audio.

For a multitude of reasons, I recently moved over to Traktor Scratch, and went back to spinning audio only, but sometimes I do get a yearning to bring a visual aspect back to my sets. With that in mind, I started to investigate my options.

WHAT ARE THE OPTIONS?

Unless Native Instruments brings out something of its own, a direct video plugin for Traktor seems very unlikely to appear. So a third-party, standalone solution is required. At the simple end, there are visualization options, some of which we covered last year here. They can do a great job if you want something basic and cheap that relates, in some way, to the tempo and intensity of the music you’re playing.

In fact, there are lots of options if synchronicity is something you can live without. I’ve been very impressed with Hexler’s TouchViz on iPad, which is basically a portable version of a full VJ platform like Resolume. It works very well, provided you’ve got enough storage on your tablet for plenty of content.

Speaking of Resolume, a full-scale VJ application like that, or Arkaos GrandVJ, will of course do a great job of providing whatever kind of visual splendor you could ever dream of. They’ll also sync to Traktor via MIDI, to keep everything in time (more on that later).

There are some downsides to those: They tend to be pretty demanding on a system (especially one already being used to mix audio), they are expensive (Resolume Avenue is around $400), and their interfaces are designed to take up a whole screen on your computer. If you’re into the idea of running a dedicated machine for visuals, maybe syncing with Traktor over network MIDI, or external hardware, they’ll be great. But for someone like me, who wants to keep everything in one (not immensely powerful) box, there is something that has the potential to work a little more smoothly.

Inklen’s MixEmergency (ME) plugin has been the solution of choice for many Serato users ever since its debut. It costs $199—around half the price of Resolume Avenue—so it offers good value if you will get sufficient use from it. ME has a massive amount of features, is highly customizable, and not too demanding on system resources. It’s still recommended that you use a Macbook Pro (MBP) with a dedicated GPU; you won’t get very far with an old white Macbook with 64 MB integrated graphics, but my 2011 13” MBP works pretty smoothly.

The bad news: MixEmergency is only available for OSX. It would be great if it were also available on Windows, but sadly it isn’t. (If you know of any equivalent solutions for Windows users, please let us know in the comments below.)

MixEmergency is a very DJ-focused design—the video equivalent of two decks and a crossfader. I won’t be doing a full breakdown of its features here, but instead focusing on the aspects of the latest version of the software which I’ve been leveraging to make it work alongside Traktor.

One of the key factors is the malleability of the interface; each element has a panel of its own, which can be closed or positioned as you see fit. It will also float above the Traktor interface, so you can mouse around in Traktor without the ME interface disappearing.

TAKE IT TO THE BANK 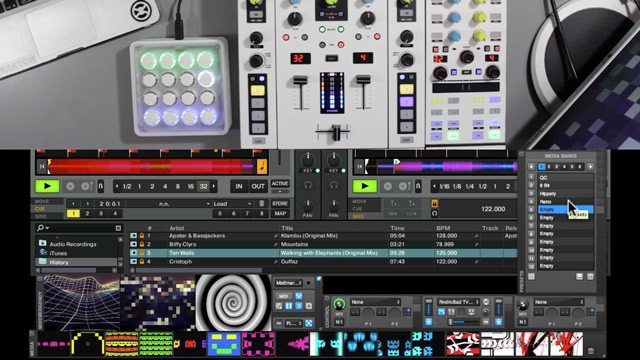 The software has two modes—one which ties the software to the playback of files in Scratch Live/Serato DJ, and a standalone mode, which plays back video files loaded directly into ME.

For my Traktor setup, I use that standalone mode, and rather than dragging and dropping video files straight in from the Finder, I utilize ME’s Media Bank. The Media Bank is a repository for a bunch of clips (previously 12, now 16), which, when activated via either with the mouse or MIDI, will load to whichever deck is not currently playing back on your output screen.

That was okay in older versions, but obviously a 16-file limitation was not very conducive to using the application on its own. What version 2.5 brings with it is the ability to save an entire media bank as a preset, which you can load, again, via MIDI. There are 72 preset slots available, each able to hold 16 files, so you now have access to over 1100 video clips at the push of a button or two.

CAN YOU FEEL THE BEAT? 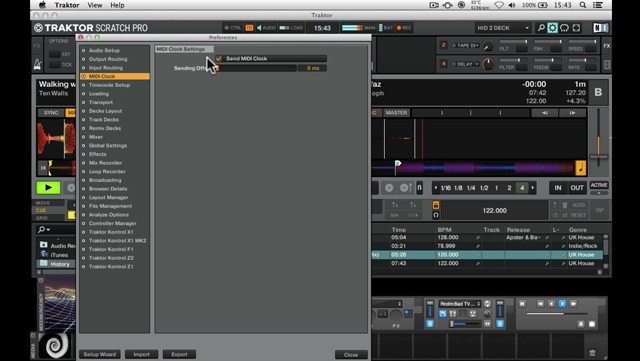 The second big change in ME 2.5, which has opened up its potential as a Traktor companion, is MIDI Clock Sync. The application has long since had very flexible MIDI mapping, including MIDI output lighting, but in 2.5 it also has the ability to synchronize to the MIDI clock sent from Traktor (or any other app with that function).

You set it up very simply; enable MIDI clock sending in Traktor, and add a generic MIDI output via Traktor’s Virtual output in the Controller Manager, exactly the same as if you’re sending clock to Ableton Live or Maschine. A tick-box in ME’s MIDI settings tells it to read that clock.

While that MIDI sync doesn’t change the nature of the actual file playback within MixEmergency, what it does is allow all of the effects to sync with the BPM from Traktor. As I demonstrate in the video, that can be as simple as a Brightness effect which flashes in time with the beat, or the most complex arrangement of multiple effects, created with ME’s FX Sequencer.

What that means is that you can take any footage you like, throw it into ME, and have it play back in a way that makes it work rhythmically with your music from Traktor. Even the simplest of videos can become a full-on beat-synced monster. 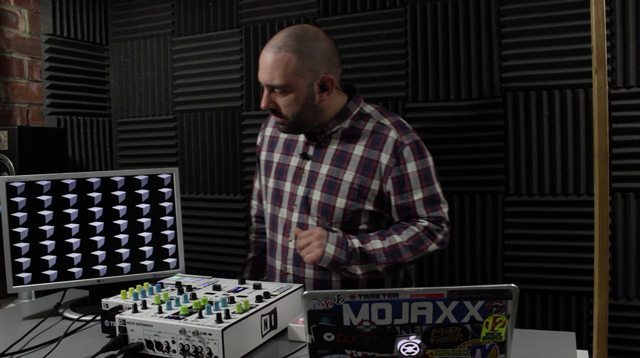 I won’t lie—Quartz Composer (QC) confuses me. A lot. It’s a programming language, part of Apple’s Xcode developer package, that allows people more clever than myself to leverage all the graphical abilities of the OSX operating system.

If you are really smart, you could create your own visualizations using QC alone—beat- and volume-reactive stuff, which can look amazing. But there are two ways we can utilize them in MixEmergency.

Firstly, you can load up Quartz Compositions as overlays, so you can have your main video clips playing underneath, while a composition plays over the top. As with the media bank, these can all be saved as presets, meaning you have the ability to have dozens available at any time.

Secondly, you can load them to the decks in ME. In the video, I show a simple QC of a cube, which rotates in time with the BPM; start adding some sequenced FX, and you’ve got the makings of some seriously impressive beat-synced visuals, starting with a truly simple source. I’ve asked Inklen to put together a folder of beat-reactive Quartz Compositions for DJTT readers to play around with, which you can grab here.

I haven’t really scratched the surface of all the features in MixEmergency here; there’s a ton of stuff I haven’t even mentioned, like Image, Text, and Camera overlays, just for starters. But hopefully this article might inspire you to try playing around with it yourself. At this point, I’m still experimenting with exactly how I’m going to use ME to add visuals to my Traktor sets, but I’m confident it’s going to be very workable.

Using video in a live setting can be quite tricky, and you’ll want to do some reading up on the subject before you dive in too hard. I’ve included a few links below for you to check out, to that end. There’s a demo version of MixEmergency available to try, so it’s definitely worth getting that and giving it a go.

If you have any other solutions for combining Traktor and visuals, please let us know in the comments below, especially if there’s anything that will do a similar job on Windows. If Native Instruments won’t give us visuals, maybe we can do it ourselves…

Tell us about your experience with mixing audio and visuals in the comments below.

How to Maximize Screen Real Estate in Traktor Using Layout…