Tagtraum Industries announced today the release of an update to their beaTunes software. beaTunes 4 is more than just key detection with the added features of a media player and improvements to song analysis. Read on for more about how beaTunes 4 overhauled the UI, improved music algorithms, and changed the way song structure is analyzed. 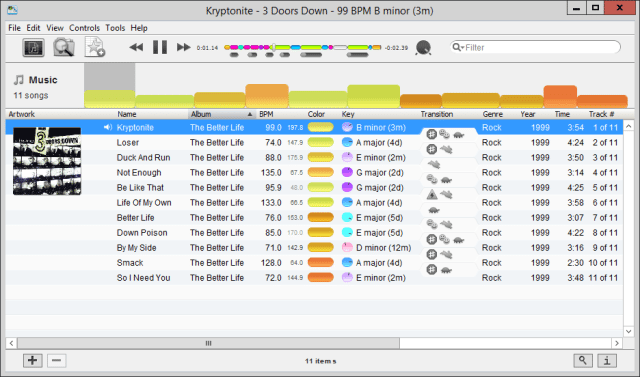 Probably the most noticeable feature of beaTunes 4 is the new UI which looks a lot cleaner compared to beaTunes 3.5 and it is apparent that a year’s worth of work went into it. The software itself has a feel similar to iTunes without mimicking the Apple software too heavily.

Upon the first run of beaTunes, the software begins by offering solutions to fixing incorrect and mismatched ID3 data which is perfect for those DJ pool tracks which rarely contain accurate information.

The biggest change is the ability to break down song and navigate the structure, allowing the user to scrub through a song semantically. Most songs follow a set structure (intro, verse, chorus, ect.) and beaTunes reads each song to segment the track into pieces. A notable feature being “Peek” which portions the song into different sections and starts playback on the chorus or verse, which ever one is more prominent. The software has only been released for a few hours so many testing and reviews are still to surface however in the video above we can see how “Peek” breaks the song structure of Adele’s “Set Fire to the Rain” is exploited in beaTunes 4.

A DJ relies on the important information of BPM detection to keep the mix in tempo, key detection to play harmonically, and loudness to avoid blowing out their headphones. Tagtraum seemed to have taken a lot of time since the last release to ensure whether the user is an intense audiophile or professional DJ that beaTunes 4 offers improvement in all these categories and more:

beaTunes 4 is the latest library management software for DJs that brings new elements beyond simple BPM and key detection. beaTunes’ increased functionality has the potential to aid a DJ in creating a set that not only blends together but one that also adds complexity and feeling.

If you are looking for a new solution to fix all those track IDs, break down song structure, and all while working with your iTunes library, beaTunes might be for you. You can download a trial via beaTunes’ website and is currently available for OS X, Windows 32-bit, and Windows 64-bit. Access to the full version of the software is available for $34.95 and upgrade from beaTunes 3.x.x is only $11.95

What are your thoughts on beaTunes 4 and Tagtraums song segmentation? What is your solution for library management and analysis?

How To Color Code Tracks In Your DJ Collection