Having started a thrilling, frustrating, obsessive DJ passion back in 1994, the first needle cartridge I used was the Stanton 500, along with belt-driven Soundlab turntables. Mystified by the headshell, pins, and the general lack of reliability,  I jumped at the simplicity of the Ortofon Concordes – an all-in-one needle and headshell. They were simple, easy, sounded fine and even held up to the hours of scratch practice.

After moving to vinyl controller records I was told by a world scratch champion that the Shure M44-7 was (in his opinion) the best needle for reading the timecode from vinyl. “He must know what he’s talking about!” I thought. Cue hours of cursing while I tried to attach my new M44-7s to the Technics headshells. But, once worn in, they were rock-solid and did indeed provide an excellent signal. At the time I didn’t quite realise that the Shure M44-7 is as much a legend in turntablism as a Technics turntable or even the DJs themselves. In the 90s, as turntablists competed with each other to invent the next outlandish scratch, this cartridge allowed them to go harder and faster.

As it turns out, the Shure needle has a fantastic suspension system to thank for its reliability – something that has been captured in the below clip of the needle dropping on a playing record at 500 frames per second:

The cartridge suspension system allowed the diamond to stay in the groove (and crucially stiff enough to register the impressions in the vinyl) under extreme pressure, thus oiling the rapid progression of turntablism. When DJs realized the cartridge was no longer being made, some in the US began importing them from Asia by the suitcase-load and selling for inflated prices on the street – such was the reputation of the needle.

Modern sound engineers such Rob Thomas (Sankeys) confirm the 44-7’s use in top clubs around the world today:<

“It’s such a great sounding needle and lots of DJs request them all the time. They just seem to add a lot of warmth to vinyl tracks and are very reliable.”

London superclub Fabric is also reported to use the needles extensively.

So what is the best way to set up an M44-7? The trick is in the overhang. If your turntable came with a measuring tool that fits on the end of the tone-arm (remember that white plastic contraption that came with a Technics 1210?) use it!  If the needle tip hangs too far forward or back, the diamond applies too much force on one of the walls of the record groove and that is when you get side-to-side wobble. 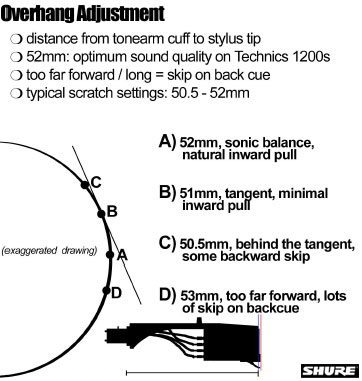 This is the advantage of needles that have to be fitted to a headshell. They allow the extra control to adjust the set up precisely to your tonearm to give you optimum performance. When reputations rise and fall on one skip of the stylus, it is perhaps worth the effort.

Read the full story of the M44-7 in Macho Zapp’s multimedia feature here.

high speed cameraneedle dropshure m44-7slow motionvinyl record drop
Share
Comments
Get DJTT love in your inbox
Drop your email address here, we'll send you news, tutorials, and special offers once a week.
Unsubscribe at any time. we won't sell your data, ever.