Novation has been building Launchpads for the better part of decade, and it’s fair to say the controller has launched careers, pushed controllerism into the mainstream, and been an integral part of thousands of DJ and producer setups both onstage and in the studio. Today Novation is announcing a professional version, the Launchpad Pro, which brings long-requested features to the product line. Read on for full details.

Name: Launchpad Pro
Manufacturer: NovationAvailable: Spring 2015Price: Street price will be $299.99In A Nutshell: The RGB-pad filled big-kahuna of the Launchpad family, with velocity sensitive pads and additional mixer controls

Watch it in action: Thavius Beck rocking an exclusive Ableton set on the Pro

Novation has taken their ubiquitous controller and brought on a number of features that go well beyond anything we’ve seen in a controller at this price range (the Pro will launch with a street price of just $299).

The Pro also has an array of new modes that allow dynamic control over Live: 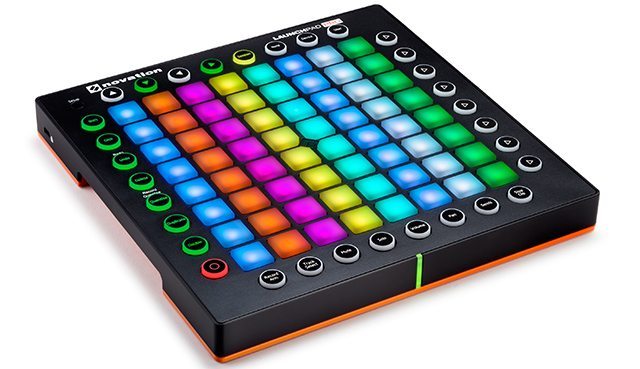 The Launchpad Pro also feels very pro – with an upgrade to the physical surface to a more soft-touch plastic that resembles the Ableton Push. There’s a nice orange shade added to the bottom of the unit, and it sits up a bit higher than other Launchpad products. On the front, there’s a new RGB indicator – we’re not sure what the function there is yet. The Pro is still very lightweight (no official specs yet) and is roughly the same dimensions as the original Launchpad, albeit a bit thicker.

We’re impressed at the amount of functionality that Novation has packed into this thing, eliminating a lot of additional work that some live performers have had to put in to build a performance environment around their Launchpad. (We wish they would have built a great tool for making wild LED graphics, though!)

The Launchpad Pro is expected to lift off into stores sometime this Spring for just $299.