Tucked away on the western shores of India lies one of electronic music’s most storied towns. Anjuna Beach, located in the state of Goa, has developed a name for itself in the rave scene for their legendary full moon parties, but its musical history goes much further back. Today Akhil Kalepu gives a history lesson on Anjuna Beach and its influence on shaping the sound of Goa trance and the Goa scene.

Before getting annexed by India in 1961, Goa was a province of Portugal for about 450 years, leaving a unique concoction of cultures in the state. Eventually, Anjuna became a popular destination for hippies and expatriates from Europe and North America, forming the basis for the future rave scene and the birth of Goa trance, though the exact details of the origins are hazy.

The first modern settlers came to Colva Beach in southern Goa. Whether they were beatniks or hippies, they trekked from America and Western Europe, all the way to South Asia, attracted by the spiritual nature of the Indian subcontinent. Hinduism was becoming more known to the western world, and many hippies were getting familiar with Dharmic religion and meditation, as well as India’s famous hashish, which was legal in the United States until the mid-70s.

Led by dirt roads, they eventually made their way from the west, to Goa’s capital of Panaji to the western shores lined by palm trees. These fishing villages along the coast had barely any modern infrastructure, keeping a lifestyle that was starkly different from life in the West, an attractive alternative for the counterculture movement that grew up in industrialized society. 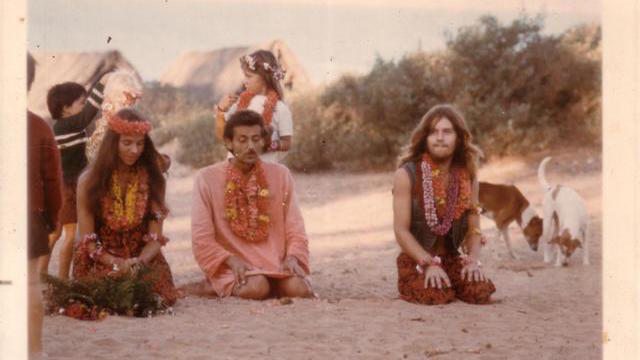 It wasn’t until sometime in the mid-60’s that the Goa scene really got started. An American expatriate named “Eight Finger” Eddie was looking for a spot to setup a hut when he heard about a little known beach called Anjuna. Most of the local population only spoke Konkani, making it difficult to for foreigners to start a life there.

Things got easier when Joe “Banana” Almeida started a restaurant where he would help out hippie travellers visiting the town. The place became a sort of hub for incoming westerners, who were starting to spread throughout the country. Eventually, New Year’s Eve in Goa became a legendary event for the hippie scene.

While Goa has become more commercial over the years, “Eight Finger” Eddie still lives in Goa, and that restaurant still operates today, run by Joe’s son, Tony. Walking through Anjuna Flea Market, you can even spot veterans from the hippie generation mixed in with the modern day backpackers. The Flea Market was also instrumental in shaping the scene, providing newcomers an opportunity to barter their unwanted possession to start a new life, as well as functioning as a hangout spot.

Locals will tell you that Anjuna was chosen because it lacked a police station, allowing these drug-friendly immigrants to imbibe without having to pay baksheesh (bribes). The open atmosphere can more accurately be attributed to Goa’s history as a Portuguese colony.

The heavy European and Christian presence made the local community familiar with western customs with partying, as well as sexuality and privacy, though it is ironic that the hippies escaping the west chose the one place in India with the most Christian influence. The Goa beaches were also conveniently located to India’s transportation lines, providing easy access to Bombay, an access point to Rajasthan and Nepal in the north.

For more DJ history check out these must watch DJ movies/documentaries.

These few decades, as well as Goa’s historical influence, provided the foundation for the rave scene to take off in Anjuna. The original settlers were partying to the guitars and psychedelic rock records they brought from back home, having jam sessions on the beach, fueled by LSD and a thirst for enlightenment. In the late 70s, electronic minded bands like Kraftwerk were changing up the local music scene, and by the mid-80s, much of the hippie element in the scene had died out and local DJs like Laurent, Fred Disko and Goa Gil were starting to rock parties with industrial and EBM (electronic body music) records.

The very first electronic song played was supposedly a Kraftwerk track back in 1970, brought over on tape by a visitor, a story that defines Anjuna’s music scene. The sound was an eclectic mix of disco, house, techno, rock, pretty much anything that hippies were bringing over on tapes, as the music community was completely underground, with tracks traded from DJ to DJ without any support from labels. The push into electronic production was initially resisted by the veteran acid heads, who preferred live bands with tapes playing between sets.

This resentment was quickly forgotten with the onset of synthesizers, samplers and midi equipment in the 80s. Artists like Front Line Assembly, Nitzer Ebb, and Orbital were fueling much of the material in Anjuna when the rave scene was coming together. These tracks would be remixed by local DJs, often removing lyrics and manipulating them into what became the Goa-style. As the 90s came in, Anjuna had achieved worldwide fame as a party destination that still carries on today, though with fame comes the usual complaints of commercialization.

Goa Trance enjoyed its heyday into the mid-90s, though its influence would carry on in the electronic music scene. While trance music exploded in popularity, the Goa scene morphed into psychedelic trance, with many of the original players like Hallucinogen and Man With No Name continuing as psytrance artists.

The style has spawned a variety of subgenres from the clubby Full On sound to the Dark styles originating from Germany and Russia. There is a freeform variation from Finland called Suomisaundi that pushes the meaning of the word psychedelic, and the downtempo Psybient style is popular thanks to Shpongle, a project of Hallucinogen’s Simond Posford and Infinity Project’s Raja Ram that has achieved worldwide acclaim.

Today the scene is not quite as big as it used to be, but it is by no means any less intense. Much of the original hippie ethos of and togetherness and transcendence still continue today, nurtured by groups around the world. To learn more about events in the vein of the Goa spirit, check out our article on Immersion Festivals.

What other genres would you like to learn more about? Let us know in the comments below!