Today we’re excited to feature the travel setup for one of the founding members of the Invisibl Skratch Piklz, Beastie Boys collaborator and tour DJ, the Serial Wax Killer himself, the one and only Mix Master Mike. Mix Master Mike has had a very successful career and continues to be at the top of his game, playing shows around the world. Let’s look at the gear that he uses the road. 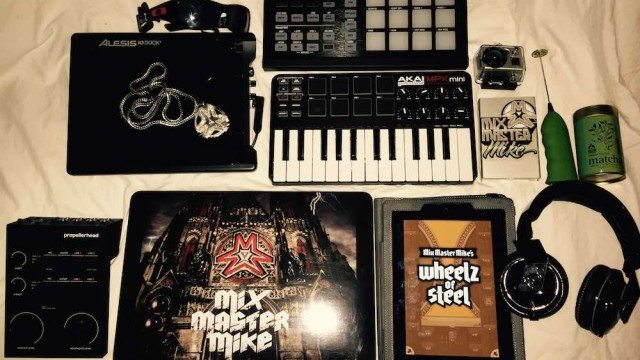 I use Reason, Protools HD 10, Maschine on a 15″ loaded MacBook Pro. As far as production work flow its starts off on Pro Tools. Hit the record button and just jam out for hours and compile and edit moments from what comes out of turntables, Reason, and Maschine. My compositions are mostly concieved on the road. Mostly in the air. There ain’t shit to do on an airplane but make music. Way better than ramming peanuts in your face and watching movies. My favorite VST’s to work with are this thing called “The Mouth” from Native Instruments. I also use these things called the “Zorlanfenfu Zorkon” and the “Zektarian falafel” (one of a kind Mix Master Mike plugins).

Alesis iO Dock and Propellerhead Balance, great road audio interface. I plug the iO dock into this device to sample from the iPad into Protools.

The shades for touring, they’re loaded with audiobooks and music. Some of the audiobooks I’m listening to are “Cosmos” by Carl Sagen, “Art of War” by Sun Tau, “The Grand Design” by Stephen Hawking, and “The Alchemist” by Paulo Coelo. For DJs and producers I recommend “World War Z” by Max Brooks, an oral history of the zombie war.

I use the Mix Master Mike Wheelz of Steel app to assemble sets on the road. The app features 2 turntables, mixer, cue buttons, loop effect and reads entire iTunes library. From the iPad I love to sample movies, the animoog synth, also things off of my voice memos.

GoPro Hero is used for tour footage. There’s no alcohol in this bag, instead you’ll find Matcha Green Tea.

What Gear Would You Love To Travel With?

I would love to take my ASR-10 and Moog Voyager with me on the road. Too bad the weight is an issue.

What other artist setups would you like to see?
Let us know in the comments below!