Thunderbolt 3 Will Have The Same Connector As USB-C; One Less Cable To Worry About!

Ask any DJ what the biggest pain is about having a bunch of different digital gear and usually one of the first things brought up is making sure you’ve got the right cables. Exciting news today from Intel, who are developing the next generation of Thunderbolt (3), and have decided to make the connector exactly the same as the USB-C connector.

At the same time, Intel has made a strong claim that their Thunderbolt 3 technology will be the fastest consumer data transmission cable out there, clocking in at a staggering 40 Gbps – meaning it can handle “Thunderbolt 3 data transfer, support for two 4K 60 Hz displays, and quick notebook charging up to 100W with a single cable.” Incredible. 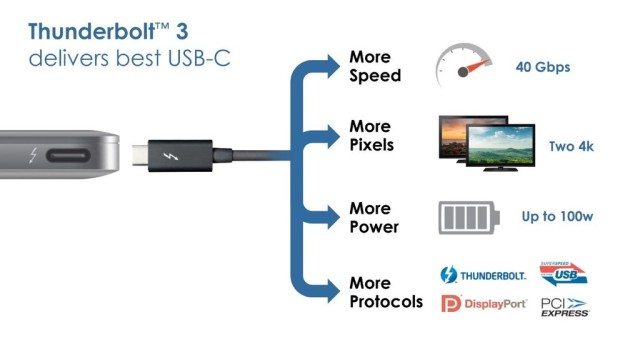 These two technologies are still a bit out there in terms of implementation, but over the next 5 years you can expect to see quite a few more soundcards, interfaces, controllers, and other gear that will take advantage of these new technologies.

Read more: Why the New Macbook Might Not Be Good For DJs