In one of our recent members-only newsletters, I presented an open question to DJTT readers – if you had endless time and money, what gear would you design? There were some great responses – so today read some of the most interesting and unique dreams some of our community members have for the future of DJ and production hardware.

Simon Beckett emailed a response in dreaming of what essentially sounds like a good version of this old Technics player – something closer to the Numark V7. Here’s his description:

“I dream of a MIDI controller with a motorized platter and 12-inch vinyl on top. 1200-like controls, no extra buttons. Just an ultimate scratching maschine without needles and DVS records. Something like Numark V7, just much more simple, with Traktor support and a 12-inch [platter]”

I really enjoyed Dave Smedly’s strong commitment to the open-endedness of the question. Instead of just being limited by current hardware and software, he drew inspiration from movies for his imaginary DJ project:

“I’d work on a heads-up type of interface to the music software like that of the movie Iron Man, where you can interact with 3D objects using your hand. You can face and watch the audience as they watch you work the controls. The waveforms would be rolling by, pushed buttons blink to the touch […] track names would be available for them to see as well. It would be projected by a few small portable devices (yea, right)!

The harder controls would be done via a neural link with feedback via special glasses. You would be able to assemble a set in your head.
One obstacle would be the need to have something solid to pound on because [controllerists like] Ean would not be satisfied poking at “MIDI air buttons”.  So perhaps a hybrid. At one point, you would be able to project a 3D panel with limited controls out into the crowd and let them put their own spin on the production and maybe get them hooked on being a DJ.

The best part would be that they wouldn’t be able to spill beer on it!”

There’s a demand in the DJ industry for customization – and Ronan McDonnell‘s idea reflects that:

Something with customizable face plates and shell, in addition to buttons and faders. That way people could customize the appearance to suit their own live rig.

The controller itself would be designed for intuitive, performative use. So much of DJing involves staring down intently. I want a controller that provides haptic feedback so I can work the crowd at all times and still retain a high level of precision […]

Also, I want it to fit in a backpack and be drink proof and drop proof. 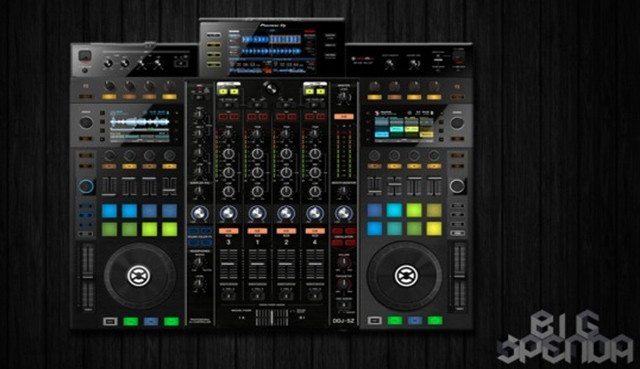 Elliott Spender (aka Big Spenda)’s idea was one of our favorites – and even came with a complete Photoshopped mockup! Great work – it takes the XDJ-RX and Kontrol S8 and combines them into an epic oversized DJ platform:

If I had a team of engineers and software developers then I would create a DJ controller that takes the idea of Rekordbox and adds the features from popular Traktor and Serato controllers. The final device would have on board screens, similar to the NV and XDJ-RX but have an on board hard drive for complete portability. The device can be connected to a laptop and the entire music library, effects settings etc are then all synced to the device.

It has a standard two deck layout with four deck capability, dedicated S8 screens on each deck with a central browser screen from the XDJ-RX. A full standalone mixer from the DDJ-SZ that has many ins and outs, including full DVS support. The sample pads from the S8 add the remix deck style functionality and possibility of midi mapping while the addition of the S4 jogs, gives a bit more control over mixing than a touch strip. The overall unit has a feel of the Xone 4D but with Pioneer and Native Instruments design. This unit can also accept USB sticks so could be installed as a centre piece of equipment in a club with control vinyl so any type of DJ can perform.

Bring Back The Numark MPC DJ

If you can think back about three and a half years ago, you might remember Numark teasing a controller that never came out – the MPC DJ. Elemental Smurf‘s idea sounds similar:

If I could create my very own DJ controller. I would make something that was similar in size to the Pioneer DDJ-SR, but I would have a drum sequencer with jog wheels and a mixer as usual. This would be used to create tracks live while entertaining the crowd with normal DJing.

The DIY Solution: The Forge 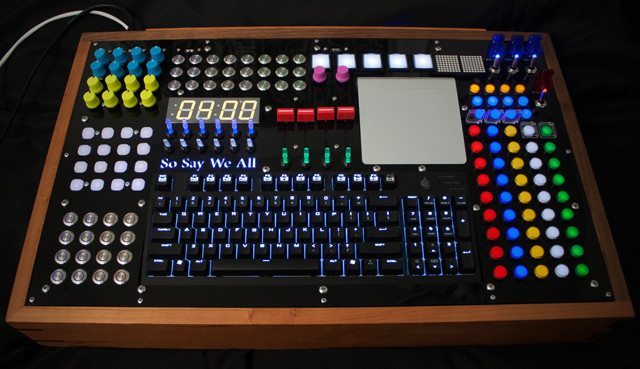 It being the DJ Techtools community, odds are always pretty good that someone is going to already have put their ideas into action. Timothy Reese designed and built a massive controller that has loads of controls and a great Battlestar Galactica shoutout.

I ran into this question last year, and developed a new controller called The Forge. It’s an all in one MIDI/HID/Bluetooth controller, with 118 buttons, 16 knobs, 4 faders, 2 rotary encoders, 20 toggles, and 4 hardware switches. I embedded a keyboard, and an Apple trackpad to let me access my laptop without having to take my hands off of the controller. It has well over 200 LEDs, to give me visualizations on everything. I even used some Chroma Caps, they’re great for the faders, pots and encoders.

Since I use this for songs I’ve written, I didn’t include a crossfader. It’s entirely based on clip launching and performance, rather than mixing.

Brandon Matlock‘s idea – essentially a cross between a classic MPC and an Ableton Push, is especially awesome because of the backwards compatibility. When was the last time you heard of a new piece of gear with a floppy drive on it?

I would design a new school music production center with an integrated drum machine and onboard FX as well as integration into Ableton software so tracks could be routed separately.  The display would be much larger than MPC displays and would have a touch screen.

There would also be multiple SD card slots, USB drives and a Floppy Drive and Disk Drive so old or new samples could be used on this production system.  Other features would be 8 outputs, assignable outputs, and outputs for just the integrated drum machine. Also this machine could connect via USB and track into DAWs (like the TR-8 can over USB).

The controller idea that Pete Schirmer / thisispete sent in shows a blatant disregard for keyboard based DJing. And why not? For many DJs, a controller more than replaces your keyboard, except perhaps for when searching for a requested song.

A controller that is the exact same size and shape of a Macbook Air keyboard that has a mix of functionality of the S2, S8, and Z2 but sits atop the keyboard. [Features include:]

Donny / No Left Turn has made plenty of appearances around DJTT over the last few years – so it’s no surprise to see him send in a submission – and this one hits close to home for us:

Question: What type of DJ equipment would I invent?

Answer: An 8×8 Midi Fighter with a built-in audio interface that has 4x low profile, stereo outputs.

When I do my controller sets, setting up my rig is definitely what I look forward to the least and this is even with a minimal rig (laptop, Launchpad, and some flavor of Midi Fighter). I don’t need a sound card because I am fortunate enough to be able to have promoters provide a DJM-900 for me when I ask for them, but the thought of “What if they got the wrong mixer?” is still always at the back of my mind. Sure, you can say I should always bring a back up sound card, but then that’s adding one more thing to the process which I dislike the most.

A product like this would solve numerous problems for me and a lot of other DJs, I would imagine. This would eliminate the need to specify an exact mixer in order to play your set and have one less piece of kit to setup in an already cluttered environment.

This is 100% my dream product. Life would be complete if such a thing existed.

Another take on this would be if you had a Midi Fighter 3D/Spectra/Pro with a stereo output that could be aggregated together into a single interface. So if you have 2 MF’s as your rig, each controlling a deck, you can have them both connected to the computer but acting as a single interface to pipe 2 separate channels of audio into the mixer.

Have your own idea on what type of DJ gear you’d make? Submit your ideas and drawings in the comments below.

The DJ Techtools Blog Has A New Look