With the announcement of the brand new iPhone 6S and 6S+, Apple has also introduced a brand new technology – 3D Touch – that allows users to control their phones with the strength and depth of their touches. As we watched the Apple Keynote, it became clear that one subset of users and app developers could stand to seriously benefit from 3D Touch: music app users. Read on for an overview of the technology and how we imagine it will quickly become integrated into iOS music apps.

What Is 3D Touch?

This new technology goes beyond the limited other touch-sensitive feedback ideas that came before with Apple’s Force Touch and Taptic Engine. Many DJs and producers already know about two analogous technologies to the in the MIDI controller world: velocity sensitivity and MIDI aftertouch. The parallels are significant in that Apple’s 3D Touch is not only designed to detect how hard you touch the screen, but if you increase the pressure on the screen after the initial touch. 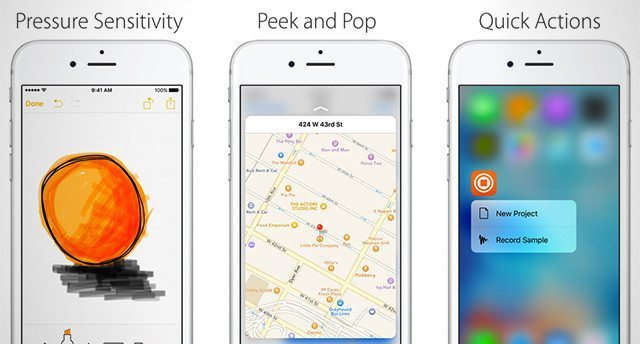 So far we’ve only seen three Apple-defined types of 3D Touch interactions documented in the media that has come out on the feature so far:

How 3D Touch Could Show Up In Music Apps

The implications for 3D Touch for iOS music makers are very clear – and we suspect they’ll roll out fairly quickly assuming that app developers are on their game.

For the pressure sensitivity, we suspect that almost every synthesizer and beat machine app will immediately incorporate velocity-sensitive pads/keys. Press harder on a pad and you’ll get a louder kick on your drum machine or sharper attack on your synth. It’s basic stuff, but something that until now has been impossible on iOS. Expect to see apps like Animoog and iMaschine be the first to integrate this functionality.

For Peek and Pop, we expect we’ll see app developers like Algoriddim quickly add these features to make the use of their apps even more efficient – want to view the full waveform or metadata for a playing track in djay? Give it a light touch to see more – or press harder to open those details. Within the same idea, you might expect these interactions to also drive quick selection process – like loading in a new track to a deck or a preset into a synth.

Undoubtedly we’ll also see a number of now layered controls on iOS music making apps – somewhat like when we first started adding shift buttons to MIDI controller mappings to allow a whole new level of control. Instead of a normal filter control, press deeply on a filter to select a new filter curve to apply to the control. Want to access your second layer of cue points or select new FX? Just press deeply on these controls and select them from a contextual menu.

3D Touch Is About Workflow

We’ve seen plenty of media touting 3D Touch as being the “next big thing” on smart devices, but the truth is that for people familiar with aftertouch and velocity sensitivity, 3D Touch is just bringing iPhones (and before too long, iPads) to the same level of tactile control as high-end MIDI instruments.

Integrating this technology right into the software is a big deal – but primarily we’re hoping that it makes music making and DJing on an iOS device less of a pain and more of a pleasure. Ideally 3D touch in a music app is intuitive, and instead of being something that gets in the way, it adds concise and efficient control for the user:

djay for iOS: Every Algoriddim App Merged Into One, Free,…