Native Instruments has announced the newest controller in their all-in-one DJ lineup: the Traktor Kontrol S5. This all-in-one DJ interface eliminates the jogs wheels from the Kontrol S4’s layout and adds in with the future looking screens of the S8. More compact and affordable than the S8, it will give DJs the screens they want at a more realistic price. Get all the details on the new Kontrol S5 inside.

The new Kontrol S5 is yet another indication of Native Instruments’ continued shift away from a jog-wheel centric work flow and towards screens instead. While the wheel has been a treasured, useful DJ tool since the beginning, they take up a lot of valuable real estate. The S5 provides similar controls to the S8 but without individual faders for Stems. 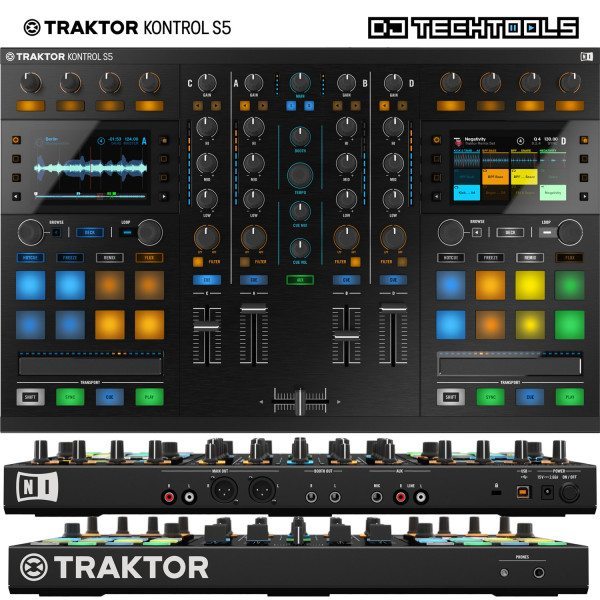 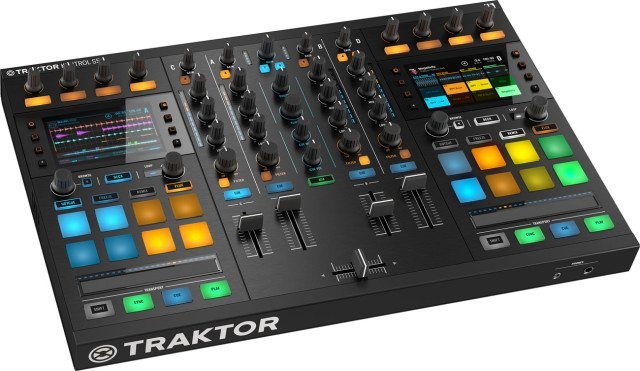 The new controller from Native Instruments doesn’t break new ground on the surface, but does introduce a few small interface improvements. The best features from the Kontrol S8 and Kontrol S4 have been combined into one single interface, begging the question: Why did we even need the S8?

Some people that sprung for the more expensive flagship model might be a little miffed unless they really love those extra 8 faders and encoders. What’s different? 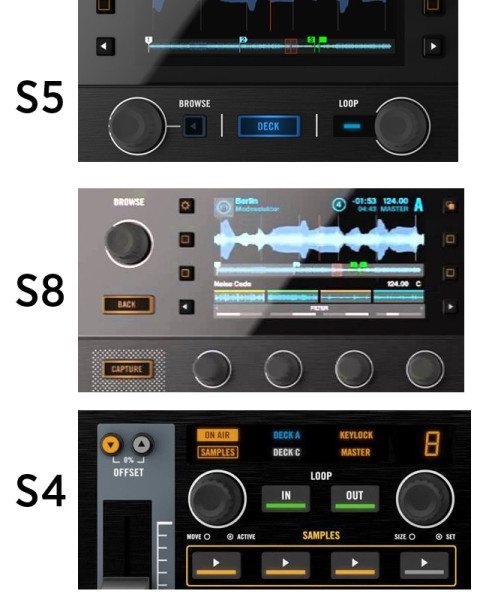 The S5 condenses and simplifies the browse/loop/deck controls significantly, which is a welcome improvement. On the S8, deck switching, browsing and loops are scattered around the controller in a haphazard way – but on the S5 they are logically grouped and laid out.

One minor loss are the 4 touch-sensitive encoders below the screen, which did triple duty for Remix Decks parameters, as well as being flexible controls depending on what was on-screen. The Kontrol S5 loses those, and instead uses the FX knobs (which are normal potentiometers) for similar functions. This could introduce some value-jumping problems if you use effects and remix decks/stems at the same time frequently – we’re guessing this will require soft-takeover (values don’t change until you move the knob to the current position in the software)

It’s somewhat unclear how to control Stem Decks on the S5, but NI indicates it is possible. Apparently you use the pads to both mute the parts and select each part for further modification with the Browse or Loop encoders. Hold the pad to select which Stem and then move the encoder to adjust volume.

Overall we welcome the new Traktor Kontrol S5 and feel like this is finally a reasonable replacement for the S4 at an affordable price. We look forward to getting one in the office and testing it extensively for you!

Want to place a preorder for a Kontrol S5? Do it in the DJTT store here.

Hacking Stems: How To Extract Parts From Stem Files