Recently we’ve seen a big move to app-based education, using games and intelligent processes to rapidly refine skills and knowledge on a certain subject. Sam Gribben, former CEO of Serato, has taken this concept, applied it to learning how to finger drum, and today is announcing a brand-new software called Melodics.

The core concept is pretty easy to understand: have you ever played Guitar Hero or Rock Band? It’s that classic concept – notes on a scrolling scale – but applied to finger drumming. The app gives you instant feedback on how you’re doing – if you’re hitting the notes right on the spot or if you’re early, late, or completely miss. 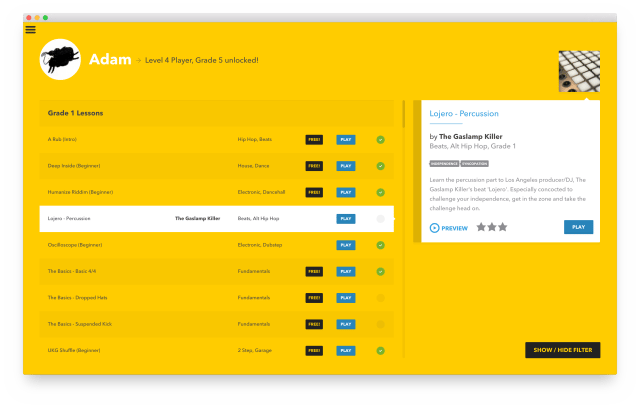 Similar to other learning applications like Duolingo, Melodics has a series of “lessons” organized into sensible skill levels that quickly allow players to progress and build their abilities naturally. Start off with basic patterns, getting more complicated and adding elements with each level.

I’ve spent a few hours playing and practicing on the software, and so far it’s exciting because it’s the first app of its kind – the lessons are designed to help you “get” the concept of finger drumming, instead of just taking a simple “repeat after me” approach that you might expect. Just a few lessons in and you can start feeling the beginning of dexterity in your fingers – it’s very exciting.

Melodics is a free download for Mac (Windows support is coming soon) – with 20 free lessons included (all different skill levels and genres) which you can play as much as you want. The full power of Melodics comes with a subscription – $10 a month – which unlocks a ton of content, exclusive unreleased stuff from artists, and new lessons and music every week. We’re going to review this subscription content in the next few weeks and see how it is!

One of the best parts is that Sam and the Melodics team has taken the time to pre-map tons of pad controllers to the software, meaning it requires very little setup for almost all major controllers. In addition to lots of common DJ mixers with pads, this also includes the Midi Fighter line – if you’ve got one, plug it in and you’re ready to drum. You can use Melodics with your keyboard – but ideally you want to start building your muscle memory on great-feeling arcade buttons, not mediocre keyboard keys.

Watch: M4SONIC’s “In The Kitchen”…