At the Musikmesse 2016 convention, which opened today in Frankfurt, Germany, news about new DJ and production gear has seemed relatively minimal. But we’ve noticed a few new pieces of gear that have appeared on news outlets and on Instagram coverage of the event – keep reading for fresh annoucements from DJ-Tech, Reloop, and Roland.

MUSIKMESSE 2016: DJ Tech Handy Kutz mixer While there's a trend for more, sometimes less is better. And for a lot of people, a fader in a box is enough, And that's just what DJ Tech's Handy Kutz is. | http://djworx.com/musikmesse-2016-dj-tech-handy-kutz/

Spotted over on DJ Worx’s Instagram coverage of Musikmesse 2016 was this new tiny mixer from DJ-Tech. The highly-portable “mixer” is designed to do just one thing: add a crossfader into the signal chain for any input.

There’s only one set of RCAs as a phono/line input, it’s externally powered, and it has RCA and XLR outputs – plus a curve adjust, tone control, reverse, and master levels. Unfortunately, the externally powered part means that this won’t be appealing towards the portable-turntable DJ communities.

According to what we’ve heard from our friends on the showroom floor, there’s no price yet, the unit is just a prototype, and there’s no “killer feature” that isn’t immediately visible on the unit. But that doesn’t mean that Handy Kutz doesn’t have a place in this world – some DJs just need to add a turntable into their signal chain, no questions asked. 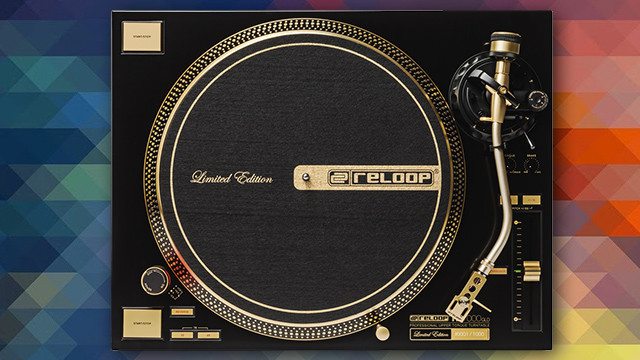 Reloop really wants to establish themselves as the best manufacturer for SuperOEM technics, and at Musikmesse 2016 they’re attempting to make that happen by releasing an all-gold trim version of their RP-7000 turntable. This is a limited edition deck, with only 1,000 units shipping worldwide – it comes with a gold headshell and sports a unique serial number for each one.

Roland’s RC Loop Station series have been a boon for live performers who want simple ways to loop multiple tracks and manipulate them on the fly – and clearly the line has been successful as they introduced the new RC-202 model. As you might expect, it’s a two-track recorder, with similar features to the RC-505. The input and track FX allow Color FX-style manipulation of the audio coming through the unit.

We don’t really see this unit as being that compelling for DJs and producers – more for keyboard/guitar looping musicians – but maybe one could use this looper in a similar way to how Loco Dice uses a looper in his setup.

As we suspected, Pioneer DJ is showing off their just-announced new TORIZ SP-16 sampler/sequencer, but only “under glass” at Messe (meaning no one on the floor can play with it), and only with an unfinished firmware in private.

We did get a few more details from Peter Kirn’s coverage over at Create Digital Music:

That’s all we’ve seen that’s interesting for DJs at Musikmesse 2016 so far – have you noticed something that we missed? Let us know in the comments.