Pioneer DJ have finally released the Rolls Royce of a DJ setup they had teased earlier in the year to a curious crowd at NAMM 2016. While most fixated on the five large screens attached to the top, a few were asking the questions about the other new features included in and around each device. Guest contributor Dan D-Squared shares some insight on what Pioneer DJ was thinking behind this over-the-top design of a product line.

Who Is The Pioneer DJ TOUR-1 For?

The big question everyone is asking themselves is “Who is this system for?” and the blunt answer is “probably not you.” At least not yet.

This system is really for the most popular “big name” DJs of the world, who are playing on the biggest stages and sound systems week after week. This TOUR-1 system is for:

These DJs all exist, and we all have many opinions about their talent, the music they play, and if they deserve to be where they are.

So why is this new rig a big deal to you if it’s not something most DJs will get a chance to even touch? The TOUR-1 appears to be made to give the crowds of people at these huge shows the absolute best experience possible. When paying upwards of $500 a ticket to go to a festival, your level of expectation is very high. The audience expects the absolute greatest display of stage design, visuals, lighting, fireworks and more. No expense is overlooked when it comes to the finer details. 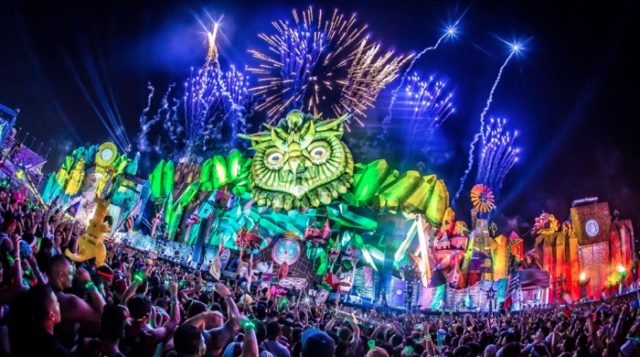 Having the best possible sound at a festival is a big deal. When you’re a DJ playing in front of 50,000 to 100,000 people at EDC, Ultra, or Tomorrowland on a multi-million dollar sound system, every thing you can do to improve on that has a cascading effect on the end result of sound.

Every sound system, no matter how expensive and technologically advanced, is only as good as the weakest link in the chain. That chain starts at the DJ booth.

Pioneer DJ has recently started advocating for higher quality sound in DJ booths – specifically on the NXS2 line, increasing their D/A conversion inside to 96 kHz/24-bit and advocating the use of more lossless formats like FLAC.

For most real-world scenarios, a 320kbps MP3 track is enough of a balance between file size, affordability, and perceivable quality when jamming out tunes at a club. But when you’re playing on a 300,000-watt stereo system specifically designed to deliver the clearest truest signal at the maximum volume level without distortion, MP3 begins to lose its benefits.

Enter the Pioneer DJ TOUR-1 system. Pioneer DJ has added some new features throughout the mixer to take full advantage of massive sound systems. On the back of the DJM-TOUR1 you’ll notice a few changes:

All these improvements are a huge deal for Front Of House audio engineers at festivals who are relying on the DJ to deliver a clear, clean, consistent signal that they can then tweak to sound best on the speakers. FOH engineers are actively listening and know how sound is, for lack of a better word, supposed to sound. They understand the frequency response of the speakers, the physics of the room or environment they are in, the reflections coming off the crowd or roof and any correction to the audio signal that can be made to steer it back to it’s “true” sound.

As a DJ, you are behind the main speaker system, you do not have any idea whatsoever how it sounds out in the audience. You have to have a working relationship with your FOH engineer to deliver the cleanest, clearest, consistent signal possible from the mixer so that the FOH engineer has to do minimal adjustments to make sure the signal maintains the sound you’re hearing in your headphones amplified at ~110dB in a large open room or outdoor environment. So this combination of upgraded internal sound card quality, using lossless audio files, digital connections throughout to minimize signal degradation and Word Clock to keep your mixer’s sample rate in constant sync is the ultimate combination for delivering the “truest” sound possible.

What About The Screens?

Of course the biggest cosmetic change of all is the addition of the screens. Rather than re-designing the existing four touchscreens on the CDJs, Pioneer DJ has added a second touch display on each CDJ, which essentially shows the same information on the screen below, albeit more in-depth and higher resolution. This seems a bit counter-intuitive to the design and further adds to unnecessary bulk of the CDJ. It puts a barrier between the performer and the audience they are working to interact with and almost seems like too much of a distraction of information at once.

They’ve also added a screen on top of the DJM, which now shows:

The added information display is surely nice, but is it really needed given that there is already a touchscreen on each CDJ? Pioneer DJ may have been better off to redesign those screens to accommodate the information they wish to display on these large, seemingly non-removable screens. The hinge mechanism that the screens fold down with also looks like a potential failure point during transit and setup/breakdown – not exactly ideal on a high-cost piece of touring gear. While they do include a sun shade, it remains to be seen just how effective they will be or what anti-reflective coating each screen has.

Only Ready For The Big Time

The thing to take away from all this is that although these TOUR1 units are made for a very specific purpose currently, it is a good indication that at least some of these features may find themselves in the DJ gear of the future at the more consumer grade level of price point. Features typically get added to the most high-end gear first and slowly trickle their way down to mainstream equipment as the years pass on.

It’s certainly no harm to at least learn what the purpose of each of those functions do, and how you might make use of them, should you ever come across some form of equipment that has one or more of those features down the road. The TOUR1 might not show up in the average DJ booth, but rest assured that the DJ booths it does end up in will be delivering the absolute best possible sound quality for the large audiences in front of them.

Now the music chosen for that sound, that’s an entirely different subjective story…