Not every DJ has a lighting designer and visuals team, but that doesn’t mean that unique lighting effects have to be out of reach. With the new SoundSwitch hardware/software package, DJs will be able to write lighting scripts for songs in their library – it’s like a DAW for lighting. When a track is played back with Serato DJ, the associated lighting cues and effects are played back automatically in time with the tracks in the mix.

The team behind SoundSwitch is calling it a Digital Lighting Workstation, with clear aspirations for track-based customized lighting shows to become the new industry norm.

For many DJs (mobile, club, underground, etc), lighting is usually a luxury or an afterthought. But with SoundSwitch, you might spend even more time preparing your DJ library and designing interesting lighting shows for every song in your set.

SoundSwitch has a whole series of tutorials on their site showing how the software is used – and the whole thing seems fairly intuitive. The software is split into two parts – Edit Mode, and Performance mode. In Edit mode, you prepare your lighting fixtures and lighting scripts for each track.

The main screen in Edit Mode looks just like a DAW, but instead of instruments, they are lighting fixtures. For each fixture, there’s a track in SoundSwitch that controls the intensity and color of the unit. There’s also a Master track if you just want to send one identical signal out to every light.

What About Songs Not Prepared In SoundSwitch?

Many DJs might not have time to build a custom lighting track for every single song in their library that they might play. The solution for this from SoundSwitch is to have a few different Autoloops that can be used as a backup for such instances.

They’re just short loops of lighting scripts that can be triggered on the fly. You can set up to 32 lighting cue loops (eight loops in four different banks). These loops will play automatically in time with your beat grid if there isn’t an associated SoundSwitch script for the playing track.

SoundSwitch is very preparation-focused. When it comes time to actually perform, the DJ only opens the Autoloops software, connects it as a “Serato Remote” in Serato DJ’s preferences, and mixes tracks as normal. SoundSwitch stays in the background and isn’t something you’ll be interacting with during a set. 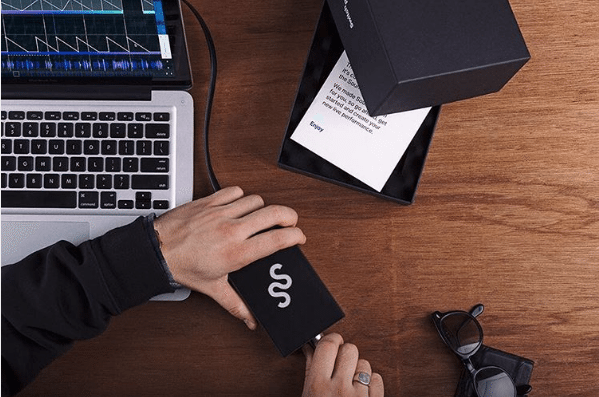 SoundSwitch requires their own proprietary DMX interface. It’s a small box, connected via USB to your computer, with a simple three-pin DMX connector on the side of it. For now, you can only use SoundSwitch with their own interface, but according to a support page on third-party hardware:

“There are a few things in the pipeline here at SoundSwitch HQ, which we are looking to get to you as soon as possible. All we can say at this stage is watch this space…”

In terms of DJ software that SoundSwitch is compatible with, it apparently works just fine with any of the Serato DJ supported hardware controllers and mixers. The software uses information from the DJ hardware to adjust the overall intensity, so it has to be a USB-connected mixing surface.

For Serato DJ users who are performing with external soundcards (specifically the SL2/3/4 or Denon DJ DS1), SoundSwitch isn’t supported – only because for now, the software uses channel faders and the crossfader to mix the lighting tracks. If audio manipulation is happening outside of Serato, it’s impossible to tell which track is going to the master output – unless those faders send MIDI back to SoundSwitch, which is on the dev wishlist for the future.

What are your thoughts on this solution for DJ lighting automation?
Would you use it? Let us know in the comments below.