One of the best things about having outboard gear in a studio is being able to step away from the computer and focus more on your ears, and the moment. It just so happens that the hardware often sounds great as well. That’s why so much analog, standalone gear keeps hitting the market. The Arturia DrumBrute is a new drum machine that packs a punch at a budget-friendly $449. Keep reading to watch Mad Zach take it through the paces in this hands-on first look. 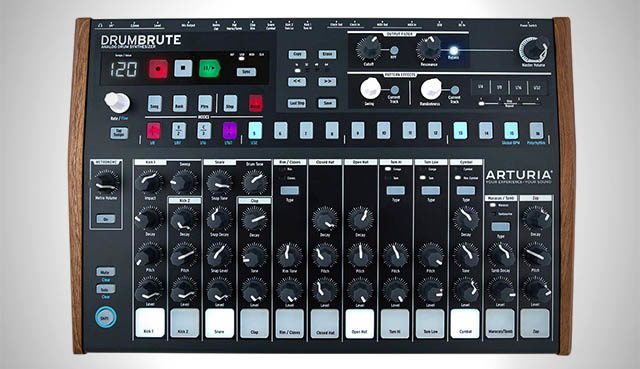 Mad Zach’s Thoughts on the DrumBrute

Birds Eye View: The strongest features of the DrumBrute are its workflow and functionality. It was fun to play, and delivers a number of innovative performance features. I thought the mute groups were cool, and liked being able to sequence quickly either by playing in patterns, or step sequencing. Also, very cool that you can run each sound out individually.

Personally I was slightly unimpressed by some of the sounds, for example the main kick and hats at long decay. I did like some of the other sounds, like the shakers and toms. I felt the unit would sound very nice paired with some analog saturation.

Build Quality: The DrumBrute is very similar in quality to a lot of other Arturia products (like the Beatstep Pro, MicroBrute, etc). If you’ve felt the knobs on those other units, you’ll know what to expect. It is designed in France, made in China.

Despite some aspects of the construction feeling a bit cheap, it does deliver fully on functionality, which at this price, is the best one could ask for. The step sequencing buttons left a bit to be desired (rather “smooshy” and cheap feeling) but ultimately served their purpose as well, and made quick work of some relatively dirty beats.

Sounds: The kicks are both fairly simple; one is punchy and the second is more of an 808 sub. The hi-hat sounds metallic when you open it up – which might be desirable to some users, but also unique.

Some of the drum slots have the ability to alternate between two different sounds that are sequenced independently – adding an extra set of sounds without needing more physical controls. The downside of this was that the same knobs control both sounds together, so you cannot tweak the two sounds separately. The filters were functional but not distinguished.

Sequencing Workflow: You can program beats in a few different ways:

Connectivity: The DrumBrute can be synced via MIDI cable, USB MIDI, and click. It features a dedicated headphone out, as well as individual outputs (1/8″) for the sounds, and a full mix output. It also comes with an editor, which connects to your PC via USB and allows for preference adjustment, as well as pattern management and editing.

Want to see more of Mad Zach’s DJTT content? Check out all of his past articles here.

Overview: Why We Dig Arturia’s MicroFreak