Lessons From Guetta: Beyond The Polarization | ADE 2018

What makes an artist important and respected in the electronic dance music community? It’s a fine line to walk, where success and popularity can be both the end goal and the biggest challenge to industry legitimacy. At ADE 2018, David Guetta was one of the keynote interviews, sharing some of his history and insights. DJTT contributor Tom Hricik was there and collected some valuable insights from the event sometimes-controversial DJ and producer

As fall weather sets in, dance music enthusiasts from around the world set their sights on Amsterdam Dance Event, a yearly festival and business in the Netherlands. Hailed as one of the biggest weekends of the year for industry and partygoers alike, DJ Tech Tools writer Tom Hricik was on site gathering insights from panels, artist interviews, and more.

David Guetta is one of the most polarizing figures in electronic music. From humble beginnings as a vinyl DJ in the early 1980s to his illustrious status in today’s EDM sphere, he has become one of the most often mentioned (and even parodied) figures in dance music.

That said, David Guetta’s keynote interview at ADE showed a genuinely different artist he’s commonly stereotyped to be. The session, “David Guetta – A Life in Music” was an interview dedicated to the life and legacy of one of dance music’s most iconic hit makers.

It was undoubtedly one of our favorite panels of the week, an eye-opening presentation that reminded all DJs that Guetta is a man who has given his life to the pursuit of DJing and a passion for music. Here’s a brief rundown of some of the insights from the 30-minute discussion:

Creativity Is An Ongoing Process

With countless hits under his belt and a musical knowledge that spans decades, Guetta knows a thing or two about fostering creativity. Though he is now associated with producing and playing pop music, he shared his origins as a Funk DJ who then switched to Hip Hop, and eventually found a home with House music.

Pop music, he says, has been his most challenging undertaking:

Guetta’s certainly known for his biggest hits like “Titanium” or “I Gotta Feeling”, but he has recently revealed a new, House-ier project…

The elephant in the room was Guetta’s new project, Jack Back. It was just this month that it became known that Guetta would be launching an alias that features an entirely different type of music than he is known for.

“I started a new project, Jack Back. It’s me going back to my roots. Half of the album is House/Tech House, something that has absolutely no commercial objective.”

Guetta talked about the tiresome chore of having to satisfy countless label heads, playlist curators and DJs alike with his work – something that the Jack Black project hopes to sidestep. Listen to a taste of Guetta’s take on House music in 2018 in the video above.

He shared that, one year ago, he had completed an entire album that he decided to throw out and start from scratch. “It was so safe, it was boring,” he said. “You don’t need the validation of the radio people around the world.”

Even though the new album is done, does not mean that it was created without any pitfalls. In a moment of vulnerability, Guetta revealed to the audience that even he suffers from writer’s block in the midst of working on big projects.

Writer’s Block: An Issue We Can All Relate To

“How do you deal with creative block?” asked the moderator. 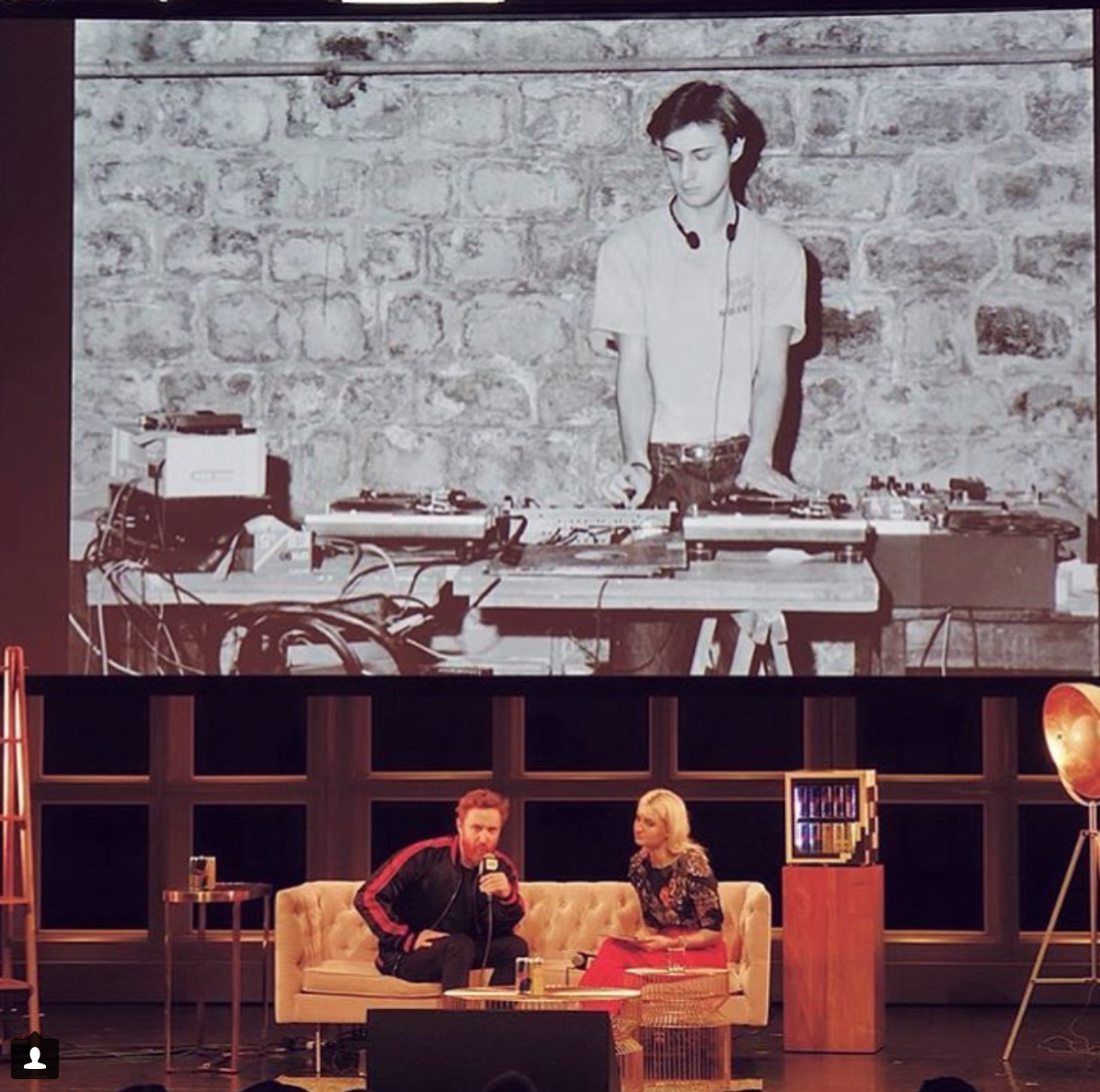 “This is what happened to me for three years. It’s horrible,” said Guetta. “I was under so much pressure from my label, my management, everyone around me. At some point, you’re making music that is so safe, it’s not interesting anymore.”

Guetta went on to offer a lesson that we all know as DJs.

“Music is music. With the same melody, the exact same song, I can make a reggae record, a house record, a ballad, or even something that is going to sound trap, it’s just a matter of the production.”

DJTT Pro Tip: Stephen Pressfield’s “The War of Art” is possibly the best work that exists on overcoming writer’s block. Check it out! 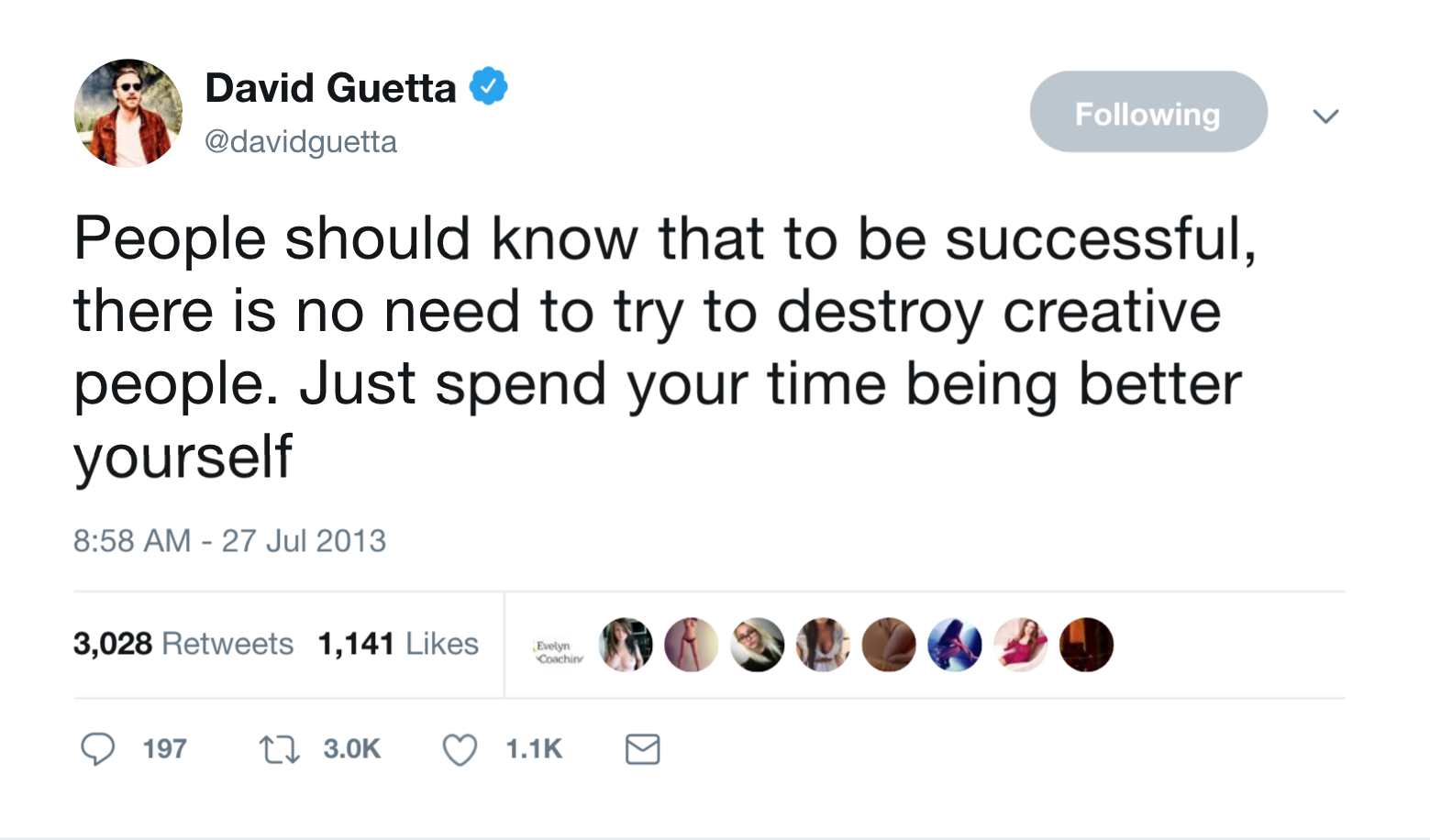 Guetta recounted that when he began working with urban artists in 2009, he received a huge amount of blowback from the Electronic community, who took this as an obvious move to “sell out.” Love it or hate it, Guetta started a trend in dance music that most pop-leaning artists went on to copy.

He almost boasted about it in the keynote, stating, “Yes, I was extremely criticized. Since then, absolutely everybody did this. This is the standard of dance music.”

Guetta seemed supremely unbothered by anybody who has words to say about him, and closed out his interview one piece of advice that applies to everybody who works in music: 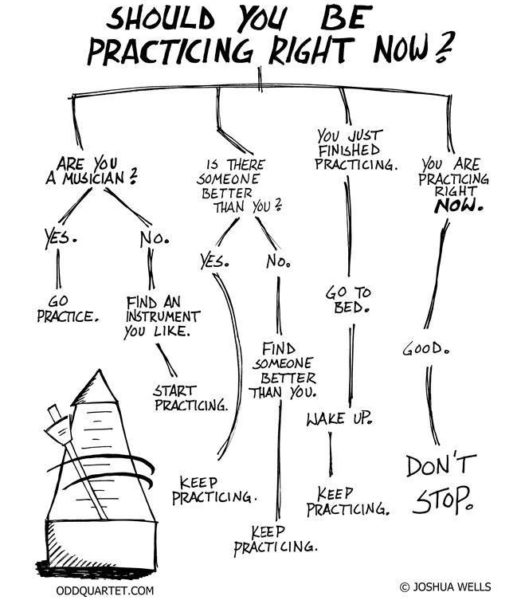 Guetta offered one last mindset tip, something you may expect to hear from Tony Robbins instead of Guetta himself.

Finally. A bit of advice that we can all agree on, no matter what type of music you like.