Last week we reported in this article that the VCI-300 would not be working with programs other than Itch. Good news, it didn’t take long to figure out a work around and we now have a solution that allows you to use the high resolution midi with any program.

The secret lies in our new cross platform program called “mini.Translator” which will be released in the coming weeks. mini Translator is a very powerful program that allows you to run the most complex setups with absolutely no midi knowledge. Just install the vci-300 preset and mini translator will hijack the incoming midi, convert the messages, and send them back out to your dj program. Its a tiny program that uses very little processing power and serves only one purpose: To load pre-sets that we create for different pieces of hardware and do all the complex math behind the scenes. 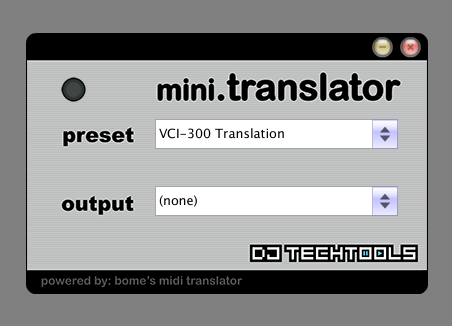 The VCI-1OOSE upgrade package will include mini.Translator and a preset which emulates the VCI-100 version 1.3 firmware. Just load the TKS file, run mini.T and you will be rocking a whole new set of controls!