Every knob, button and fader on your controller has a function assigned but there are still more things you need control over! What to lose? How do you cram in more functions? Then it hits you- wait a minute, some of these buttons I only use a few times during a set, what if they could serve 2 purposes? Fortunately, Traktor pro introduced a powerful feature that makes it easier to do that. Lets take a basic look at modifiers and show you how to make a jog wheel work for both scratching and track browsing.

The most basic modifier can also be called by a more familiar name- shift. With shift engaged then the “a” key becomes “A” or a fine pitch becomes coarse pitch. Usually, its best to group similar actions that relate to each other making it easy to remember which does what. For example, a jog wheel works really well for scrolling through both a song or a play list. By creating a modifier you can use assign one jog wheel to both functions.

To use a basic modifier you need 2 things:

First map the button to a free modifier

Since this is your first try we will just use modifier #1- it does not matter which you choose, as long as its not already in use. 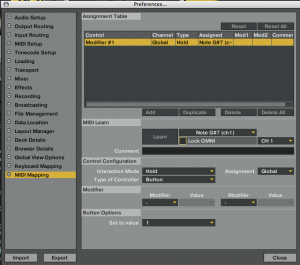 This is basically saying: “”when I hold down this button its turns modifier #1 on. When I am not pressing it then the value returns to 0.”

Next Map a jog wheel to 2 functions 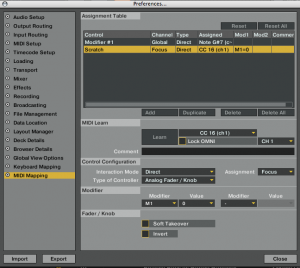 We will also associate the “scroll through tracks” assignment with that modifier but now the value will be set to 1. This means that the jog wheel will only work for track scrolling when the modifier is at value 1. Since that value is only sent when the button is pressed then your jog wheel will always scratch unless you hold down the shift button. 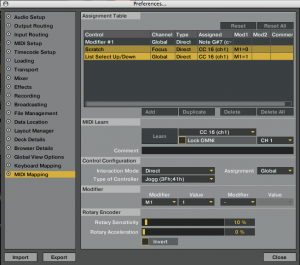 There you go, now you can execute some basic modifiers. Next we will take it a few steps further and show you how to do things like turning the modifier off when a track has been loaded, not when the button is released.

Want to take a closer look at the example TSI used here?

Curious how this works in a full set up?

then sign up for the Dj TT VCi-100 TSI file which uses a more complex version of this concept.