The Future of Control?

Interactive musical blocks have emerged big time over the past year. The Reactable, which toured with Bjork, was an amazing example of table top synthesis. Audio cubes from Percussa brought that concept into your own living room through affordable plastic blocks which recognize proximity and can be rotated. While both of these products are amazing, neither provided a idea of how this type of technology might find a place in the dj booth (Ableton sets non-withstanding). However in January, at the prolific Ted Talks, a new version of interactive blocks were introduced that did offer a glimpse at what the future of djing might be like. They are called siftables,  and may just take dj control in a totally new direction. 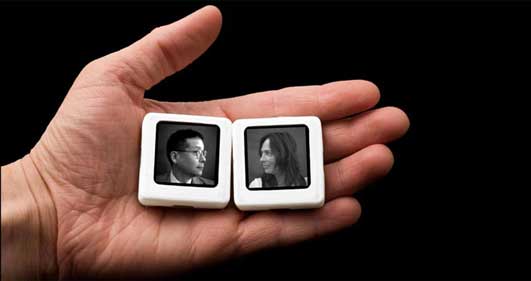 I discovered siftables through Ted Talks, which are an amazing recourse for new technology. First, watch the video demonstration and see what they are all about.

The amazing thing about the demo is that the music section was the least compelling example but it clearly holds so much potential. That example, building and manipulating a music sequence through blocks, may not be completely revolutionary but its the way they have designed the system and its potential for djs that got me excited.   Its not hard to imagine a dj set also being treated and constructed with interchangeable components that can be moved or modified as needed. With all the creative things we want to do with music, the hardware seems to be our greatest obstacle at this point so building flexible hardware that can change to fit our needs makes a lot of sense. Modular controllers such as the Mawzer, made a good entry into this direction but re-ordering components stops well short of the creative potential of a completely modular and reactive system that not only can change function but also react to the others around it.

While working with blocks in a club may not be the most realistic application of the siftable technolgy imagine if the underlying concepts where introduced into a control surface, one which you trully could mold to fit your needs in that exact moment. Now thats a controller you would never grow tired of.