You may remember this previous article: Controllerism with an Iphone, where Dj Mei Lwun used the iTM Matrix to trigger samples from the dancefloor. Well, looks like the guys at iTM got inspired as they have just put out iTM DJ, a fully fledged controller for Dj software that runs on an iPhone. Check out the screenshots after the jump!

Setup is really easy. You just have to run the iTouchMIDI client on your laptop (Which is available for mac and windows). Then turn on Wifi in the app and on the iPhone. Finally, you create a wireless network on the Mac, which is done by selecting ‘Create Network’ from the drop down menu from the WiFi widget in the menu bar.

That’s it! iTouchMIDI now appears as a valid MIDI interface in your Dj program, and can receive MIDI messages from the iTM DJ app from the iPhone, wirelessly. Configurable to your liking, you don’t have to follow how the interface is labeled, although the layout really makes sense. You can also download a .tks file for T3 and TPro from the website for instant gratification. 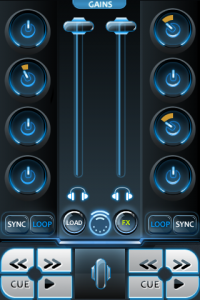 Along with the standard controls shown above, you have access to an additional set of 8 rotating dials by hitting the ‘Fx’ button, and 6 large buttons by hitting ‘Load’. The ‘Gains’ tab give you two more rotating dials. There is a crossfader available as well, which quickly appears and hide when you need it. 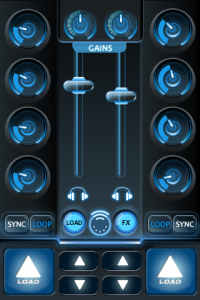 Overall, the app feels really solid and stable. The latency feels really, really low too, I had no problem cutting the sound in and out on the rhythm.

You can use as many fingers as you want, once a interface element is grabbed, moving the corresponding finger will do the job (albeit it obviously becomes cramped when you try to use more than 3!). The general knob sensitivity is adjustable. Putting the phone on airplane mode and turning WiFi back on works, and will take care of those pesky calls in the middle of a set.

So, if you are looking for a touch interface, or a first controller for your software, and already have an iPhone, then at 4.99€ this one is a no brainer. It works just fine as a standalone controller, I’ve had a lot of fun mixing with it, and walking around while doing so!

Pretty cool too to have as a backup or just to have a few more knobs available. It would also be lovely to use this as a remote to adjust the sound from the dance floor,  I think you can switch MIDI channels at the computer client level, so dial one channel to use it as a Dj controller, and switch to another to control a Live EQ4, inserted just before the main outs. There is a lot of potential in this. And why not even mix from the bar while you are chatting with that girl at the end of the night, you nerd 🙂

Next time, we’ll review TouchOSC for the iPhone.

Some freewares I can’t live without (Mac)