The Power of a Name

Picking a dj name is probably not high on the list of priorities when your starting out, but its something that could have a big impact on how well your career goes. A big part of djing successfully (in the monetary sense) is developing a brand for yourself. Like it or not, the name you choose will be the first impression people have of your brand- so choose carefully! In today’s article we are going to dive deep into what makes certain brand names work and and what factors you should consider when picking a name for yourself.

Dont Judge a Book by its… Name

Unfortunately we all do. Like it or not, humans subconsciously have observable prejudices against certain names. In his brilliant, but controversial book, “Freakanomics” – Steven D. Levitt studied the effect various names could have on a child’s financial and social success. Through rigorous research, the famous economist determined that certain types of names have a harder time in life. (*1)

Marketing experts know that sounds can play a big role in human behavior. Its generally understood that a price ending with E sounds smaller and a price ending in O sounds larger. (*2) To get people to buy- companies generally price sales with numbers like 9, and 3 so the discounts sound larger. It may sound crazy, but you have to consider that certain name sounds could actually play a role in your success. To test this theory lets look at the top 10 djs in the world (From The Dj’s List)

With the notable exception of Benassi, not a single dj in the top 10 has a name that ends with an “E” sound (like crazy). Instead they all end with a lower O sound that is produced from the back of the throat. Expand that search to the top 50 and only 2 more djs are an exception, making up 6% of the group. While this example is hardly a solid scientific study- there may be something to the sound of dj names as well and its worth further analysis.

One thing we know for sure- You want to steer clear of “dj” names that have a cliche ring to them like Dj DeckStar. Nearly no-one in the top 100 has any kind of direct industry reference in their names.

Is it Too Long?

It would be logical to assume that longer names are hard to remember and there-fore undesirable. In reality, there are a lot of top 100 djs with long names. Look closely however and you will start to see a pattern. Even though there is a mix of long and short names, the number of syllables seems to follow a trend.

The really big house hold names always have 2-3 syllables (Daft Punk, Deep Dish, Tiesto, Paul Van Dyke,), and almost no one has more than 6 in their name. It makes sense, less syllables = easier to pronounce and easier to remember. The exceptions to this rule are a few djs using their given foreign names (for example Hernan Catteneo) that have more than 6. 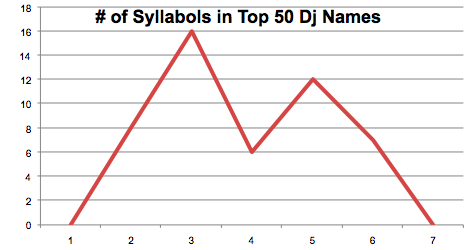 Your will notice peaks at 3 and 5 syllables, which musically speaking, have a nice “ring to them”. 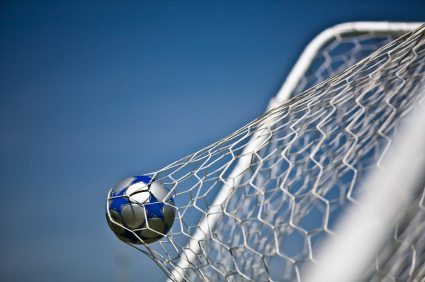 Best case scenario:  Your wildest dreams come true and global dj fame comes knocking. The goal is to become a household name, like Tiesto, where that name or brand is not only owned exclusively by you but always points to your work. Imagine if Tiesto had instead picked Dj Mobile or Dj Midas. He would have run into the following problems:

• google searches that produced car parts instead of dj mixes.

If at all possible you want to choose a name that:

• is not used by anyone else in a professional capacity

• has an available domain name

• is phonetically spelled so people can easily search for what they hear (deadmau5) being a VERY notable exception.

When you hit the big time, capitalize on the years of efforts and make sure people always think of you- not some other random dj or company.

What about Country of Origin?

Do British, American or European names fair better than others? For a while there, during the height of the Minimal craze, it was almost a requirement to have a German sounding name. I know of several American producers that created “German” monikers that seemed to have helped their careers significantly. This may work if you time the trends, but be careful- what if the sound associated with that country go out of style? It may be safer to go with a neutral sounding name that cant be associated with a style or location for the longest life span.

During the dot com boom it was in vogue to put .com at the end of your brand name but now in hindsight it just looks plain cheesy. Pick a name that is timeless and wont pigeon hole you into one sound. For example, Dj Scratch might have a hard time making it as a Techno dj if the DMC championship does not work out.

Achieving success in any musical field is going to require a lot more than just a clever dj name but it doesn’t hurt to give your self the best chances from the get-go right? If your going to use a Moniker, pick a name that will help build your career- not make it harder to start one.

Additional Reading: Self Promotion for the Working Dj

How to Fix Unwanted Jog Wheel Vibration In Clubs