In these times of economic crisis it’s getting harder to get by and even harder to rationalize purchasing high-end DJ gear. To help those with a limited budget, we are going to start a new monthly series called “The Frugal DJ”.  In each article we will cover a different type of DJ gear and offer a few lost-cost recommendations. This month, we will start with the most critical component: Laptops. Continue reading for three solid DJ laptops under $500 that will easily run the top programs. 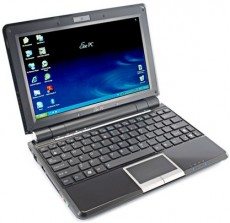 When the EEE first came out it was instantly a smash hit. It’s portable, cheap and has wi-fi, so they dubbed them netbooks. The first two facts also make them a great tool for DJs as they are very affordable and take up virtually no space. A friend gave me his EEE to try it out for two gigs and it was a treat to carry it around. Traktor Pro worked without any problems and the drivers for my soundcard didn’t complain too much since it was equipped with Windows XP and 3GB of RAM. This laptop has three USB ports, which is just right for the controller and the soundcard.

There is one major flaw with a notebook; the screen is very small. Although the size of the EEE is a testament to its portability, it is also it’s bane. The screen is very difficult to see in the club. The DJ booth is quite well-lit where I spin, but this didn’t help after a few hours of straining my eyes on the 10-inch screen. Apart from that, the price is right and so is the weight. The EEE I used was about a year old and was in pretty bad shape, so I don’t really recommend a used unit when a new version is so cheap. You can pick up a new EEE for around $399.

Macbooks and Macbook Pros are the tools-of-the-trade for many a digital DJ, myself included. The build is amazing and the stability of  the operating system makes it an easy choice, but the price doesn’t. A new Macbook sells for $999, which isn’t really in the price range of a frugal DJ. My personal recommendation would be to get a used black Macbook, which can be found from $400 to $500 and it is quite simply amazing. I’m not playing favorites here, just speaking from experience. I have been using mine to DJ for more than three years and it hasn’t disappointed besides a single freeze during a show.

There is one disappointing aspect of the macbook – the battery – which bloated after a year and a half of use. This is fairly common with the 13″ macbooks, but a replacement battery is easy to obtain for around $50. To be  fair, this was somewhat my own fault. To be even more frugal I use the same laptop for everyday use and DJing, which may not be the most prudent thing to do. If you cant afford separate laptops, make sure to turn off any interfering programs before djing. There is a nice DJTT guide to doing this automatically here. 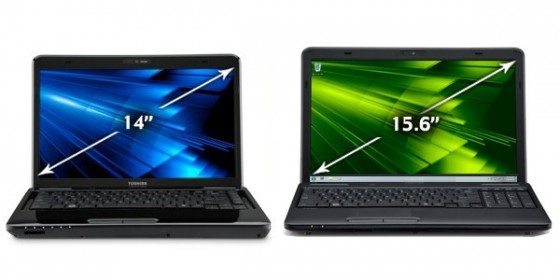 The Satellite is among the best selling laptops right now. And rightfully so, for their low price you get quite a lot. There are two models that will work for the frugal DJ, the C650D-BT2N11 with a 15.6-inch screen and the more portable L640-BT2N22 with a 14-inch screen. They both boast 4GB of memory, 250GB of hard drive space and processors that are strong enough for anything you might want to throw at them. The 15.6-inch is priced at $399 and the 14-inch is priced $599, which puts them both in the right price range. If you can manage to find a clean, used model then that price could drop down $300. Remember to check out the DJTT article about optimizing your Windows PC here.

All the laptops featured in this article are great in their own way. The EEE is ultra-portable but the small screen leaves something to be desired. The Macbook is a very popular laptop for DJs around the globe but is starting to become outdated. The 15.6-inch Satellite is a great deal, while the 14-inch is a bit over-priced for what you get. If I had to make a recommendation then it would be the used black Macbook. You will get an amazing product that is trusted and relied on by many other DJs. The graphics card on the unit belongs in the medieval era to say the least, but if you don’t play games, that won’t be a problem. If there any other topics you would like us to cover in the next frugal DJ, please add your thoughts to the comments!