One day before the official announcement we have an exclusive look at the brand new VCI-100 MKII controller from Vestax. The new MK2 version is equipped with a number of  improvements and updates including tension adjustable jog wheels, a built in sound card, and a 4 deck layout.  Will the updated version be the final nail in the coffin of the original VCI-100 after a solid three year run? The jury is still out.. 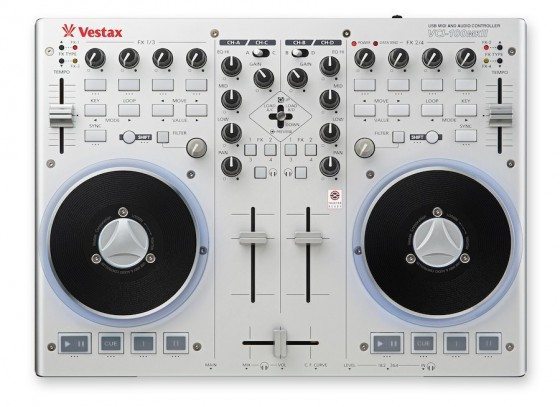 THE GOOD
Vestax adapted the new version for Traktor Pro so its set up to control 4 FX slots and all 4 decks. They have also added effects routing, filter knobs and dedicated shift knobs, all features that we worked in our VCI-100SE version out of necessity for Traktor Pro. There is now a built in sound card, although its quality is still unknown, so you dont have to purchase any separate gear. The tension adjusting jog wheels look stylish and eliminate the problem of inconsistent spins. You will enjoy larger transport buttons at the bottom, which are the same size as the VCI-300.

THE BAD
One of the appeals of the original VCI-100 was its basic metal construction which came from the experience Vestax had in building solid mixers. This was the first controller that looked like a serious piece of dj gear in a sea of Chinese plastic. The Mk2 version, with its stylish curves, plastic chassis and ground lighting effects certainly has more design appeal but might have reduced its utilitarian attraction. The buttons and faders on our prototype feel really terrible – and not playable at all. It’s not clear if they will be the same on the final production version but everyone that has tried the new controller universally prefers the old style buttons. One tester pretty much summed it up “Why didn’t they just build on the last one? Why didn’t they talk to you about the design?” To be honest, we are not entirely sure. The Mk2 is certainly an improvement in some areas but right now it looks like it’s not in others. In person testing at BPM will confirm if the final production versions have ironed out the early prototype flaws.

If Vestax comes back with improved components and Dj TechTools produces a special edition with all of our features from the VCI-100SE then this might just become a legitimate replacement to our storied flagship controller. The sound card needs some serious testing and the price is looking slightly too high but ultimately it’s up to our readers- would you buy this new controller or stick with the old one?  Please let your voice be heard so we can make the right decisions by adding your name to the list at the bottom. 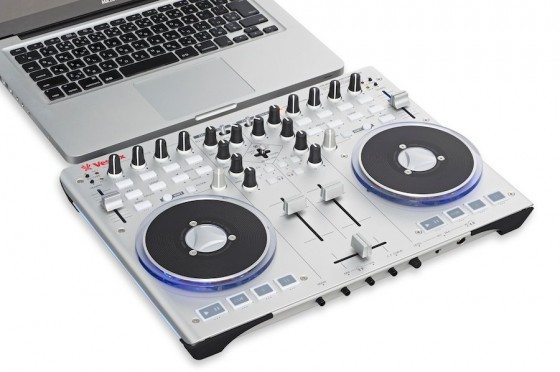 Will you make a Arcade Version?
No – there is not enough room to put arcade buttons in. We will still produce custom arcade controllers using the old VCi-100 chassis if there is demand. Please let us know if you want one at the bottom of this page.

Will you make a Special Edition?
Most likely – yes, we will produce a SE version of this controller that will be available some time in early December if there is enough demand.  Add your name to the list bellow if you want to get updates and first dibs.

I just purchased an SE, is that now obsolete?
Not at all, the metal VCI-100SE is a great controller and will last a long time. At $649 with an audio 2 sound card, it’s also less money than the new version..

Will Vestax discontinue the VCI-100?
It looks like the answer is yes but Dj TechTools will continue to sell VCI-100SE controllers through the end of the year. If people want them after that then we will produce more and they will become exclusive to TechTools. Please add your name to the list above so we can gauge the level of interest.

Is the Chassis all plastic?
No- The Body is plastic but the top sheet is alumite (the same aluminum type material used on macbooks)

How do the jog wheels feel?

Is everything high resolution?

Yes- there are hi-res jogs and faders similar to our new VCI-100HD firmware.