We have to admit that it’s been a bit hectic with the gear announcements this week at DJ TechTools. The flurry of activity had everything to do with the BPM DJ show in the UK where a number of DJ equipment manufacturers were announcing or showing off new gear for the first time. Continue reading for my personal impressions on everything from Native Instruments’ Traktor Kontrol S4 controller, the Vestax VCI-100 MKII and a new Vestax controller called PAD-One. 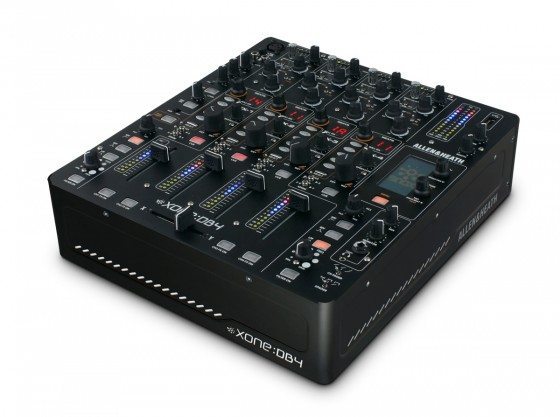 Happily this was right inside the entrance to the show. Admittedly, I didn’t get hands on, but they were very happy to provide a guided tour of it at the stand. By now we’ve all seen the specs/read the website info, so I won’t drone on about that so soon after it’s already been posted. But the things that stood out for me on the unit were:

MIDI shift button: At a press of a button this humble mixer can be swapped from being an external mixing monster to a MIDI control surface that (I was informed) can be used with all DJ software on the market. It can control every aspect of, say, Traktor, including effects, and at any time can switched back to mixer mode. This can lead to some heavier effects chaining than what is already possible, but also makes it very open to being used in any kind of set-up whether it is internal or external, MIDI or DVS. I saw it in action alongside a Xone:1D and a Xone:2D and it works really well.

The effects within the mixer are spilt in groups, my favorite being the ‘Damage’ group, where you can find effects that will slice, dice and crush a track. Also the EQ knobs have a filter option on them as well.

The input matrix is another impressive feature on this beast, with inputs being able to come from USB, phono and line and changeable at the flick of a switch. This could actually have potential as a studio mixer too.

The one pictured is still a prototype but from the sounds of it the only differences will be aesthetic, and we should expect DJM-2000 money to own this bad boy. I’ll admit I couldn’t get anywhere near the Pioneer kit all day so can’t give any kind of comparison between the two mixers. But based on the amount of stuff packed into the box, I think this gives the DJM-2000 a run for its money.

Well, what can I say? Mixed responses on this at first.


Initial impressions make this a cross between a VCI-100 MKI and a Vestax Spin, but honestly though, after having a play with this, I am buying one. The jogs feel better and smoother compared to the MKI – the tension adjustment is also a fantastic little feature. The buttons felt less ‘clicky’ than on the current model and the layout is clean and intuitive.

It now has easier access to all four effects banks in Traktor Pro, and two are always controllable at the same time. The deck switching is easy to use – it switches the MIDI page for related controls. It would be nice if there were a bit more feedback on the unit than just a switch position, but mapping an LED or two would be easy enough.

The built-in sound card sounded OK through the supplied headphones – no real complaints from me on the sound. And it brings the handy benefit of freeing up a USB port on my laptop for another item I have my eye on …

For me, the whole unit just felt right. It works wonderfully alongside Traktor Pro in the same way the MKI did with Traktor DJ 3. I was originally worried about how it would suit my current work flow if I were to replace my MKI with it. But the more I think about it, the easier it will make that transition, especially alongside my Dicers for cue points and and a few other controls. 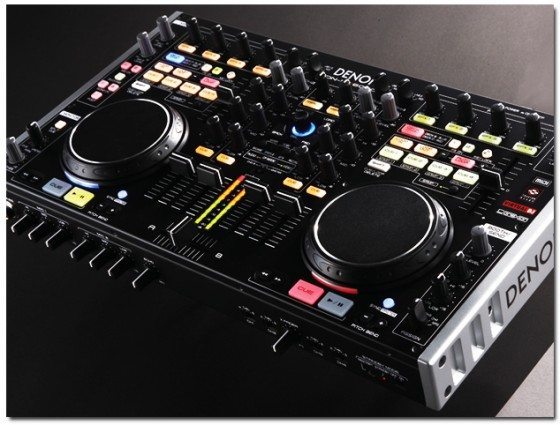 This was our first look at Denon’s four deck mixer controller with a built in sound card.

Those of you that frequent the DJ TechTools forums and have been active in the “Traktor Kontrol S4 comparison”-style threads will probably be able to recall that I was all about getting this over the S4 if I had the money/inclination a while back. However, as much as this is a nice controller, with plenty of controls, when I played with this after the S4, it felt somehow cluttered in layout. OK, this isn’t directly designed to integrate with a bespoke piece of software, but the surface was just too busy for me. Also, I didn’t like the feel of the jog wheels too much. It is a good bit of kit for the cost, but I think that in a straight head-to-head the S4 just beats this to the finish. Especially as the prices aren’t going to be that far apart and the S4 ships with a full version of Traktor.

Redeeming features were that the faders were smooth and the knobs felt reasonably accurate on small adjustments. The sound on this was of a good quality, maybe not quite up to the S4 if you’re a full on audiophile, but to my bass-battered ears it was still good enough to be confident about hooking it direct to a club’s amp. 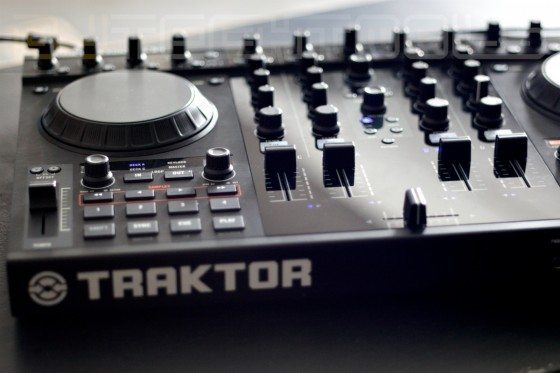 “Finally!” I hear you cry. The bit you want to know about.

There is honestly nothing bad I can say about this controller. The jog wheel position makes perfect sense once you’ve used it. Setting loops and dropping them into the samplers is a breeze, and easy as setting a hot cue. The buttons are on decks A and B controls, and drops them into deck C and D samples.

The jog wheels had an almost-perfect response compared to other jog wheels out there, and the pitch faders were like using old analogue faders on a turntable. Of course this will be the case as it has been designed specifically for the software and uses HID instead of MIDI.

The sound card, for all intents and purposes, is basically a Native Instruments Audio 4 DJ and so has the same quality of sound you would already expect.

If I had to pick at one thing to moan about, then it would be that for me personally this is too rigidly linked to the software. Obviously for anyone looking for a quick plug-and-play solution straight out of the box this is ideal. But I’m a mapping geek. As I pointed out to a few people on the day that seemed a bit – shall we say, negative – about the S4, you’re getting the all the functionality of the latest Pioneer four deck and mixer set-up at a fraction of the cost, and it’s a shed-load more portable. 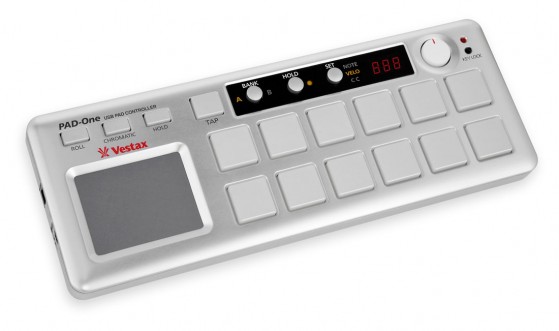 This is Vestax’s answer to Korg’s nanoPAD.

Not a huge amount I can say about this, as there wasn’t a lot they could tell me (for one reason or another).

It’s called (at the moment at least) the Vestax PAD-One. It features 12 buttons, all with LED feedback, two  banks, hold buttons and an XY pad. And I have to say, even though this is still a prototype, it is ten times better than the nanoPAD. It actually has weight to it, so it feels solid and as though it won’t break. The pads will be user replaceable (if they ever break) and it might be able to have the internal MIDI notes edited on the buttons and XY.

This looks like it should be an exciting replacement for my broken nanoPAD and will be going in alongside my VCI and Dicers, if/when I get the VCI-100 MKII as I’ll have a spare USB port. Some specs on this controller:

WHAT ABOUT THE SHOW?

As for the event itself? Great fun, lots to check out, plenty of DJs rocking out on the various stands and in the BPM Arena in the middle of the hall. It was definitely worth the £10 entry fee – only it’s a shame that I wasn’t able to stick around for the second day or the party on the Saturday night.

I didn’t check out any of the seminars that were going on (too busy playing with buttons), but there were some handy subjects including how to use Ableton, how to distribute your own music, and how to appeal to club owners to get that elusive first gig. On top of this there was the Reloop stage as you entered the hall (where DJTT member HappyDan laid down a fantastic set) and a world record attempt for the largest number of DJs creating a continuous mix.