EDM has been bathed in stutter edits for years. Ever since Aphex Twin, glitches and stutters have been the preferred form of interrupting a musical flow for artistic and rhythmic effect. It’s not only easy to do, but really fun when connected to a MIDI controller for instant cut up mayhem. Renowned electronic producer and composer BT has been working on designing his own personal glitch edit hardware and software for years, in what one could say is his quest to find the perfect glitch. He may have struck gold by joining forces with iZotope and producing “Stutter Edit”, a brand new plug-in that is giving DJs more musical destruction power per square inch than a military salvo.

Live effects units have long lacked the ability to intelligently manipulate audio- at most, they source their parameters based on a MIDI clock or auto-detect BPM on a mixer. Stutter Edit, iZotope’s brand new effects instrument, designed by BT, empowers live performers to easily play intelligent and effects that allow realtime remixing and manipulation in your favorite DAW or VST Host.

Stutter Edit is build around a continuously live sampling engine that holds and stores a loop of playing audio while applying to that loop a series of effect and timeline presets, known as gestures.  Gestures are triggered by MIDI input into your DAW – at NAMM we saw the plug-in being used with a Novation keyboard, but the possibilities for creative activation of effects are clearly one of the most exciting elements of Stutter Edit (personally, I’m dying to try it out with a custom Midifighter).

Beat Repeat’s gestures range from the likes of a super simple beat repeat to amazingly complex series of echos and pitch-modulations, that happen over the course of the timeline. The included gestures at first use seem to be very powerful and comprehensive- developed by BT and Richie Hawtin, but there’s clearly plenty more to be unlocked and discovered by users who want to develop their own. We can’t wait to see what people do with this thing

iZotope is offering the plugin for $149 until February 14th (Valentine’s Day gift idea, anyone?), after which the price increases to $249. There’s also a free trial on their website. 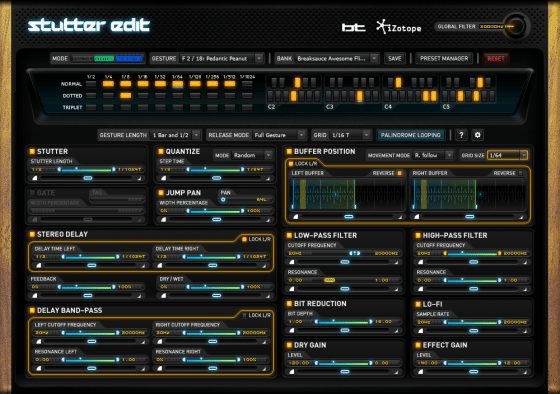 Learning Synths: Ableton Will Teach You Synthesis In Your…