Last week’s article “The Laptop: Evolution or Revolution” embraced the idea of ditching the laptop completely for performing DJ sets. Another idea which is famous among DIY-enthusiasts is bringing the PC and controllers together into one shell. This can be as easy as just stuffing everything in one case you can carry around.  DJTechTool’s member Chris Blarsky took a slightly more sophisticated approach by integrating multiple controllers, effect devices, synths and a high-end PC into a self-built shell.  He calls the all-in-one DJ solution he created in the last four months  “DJ Sound Control”. Currently showcased in New York, we took the chance to exclusively interview Chris to get to know more about his ambitious DIY-project.

What was your motivation for building DJ Sound Control? 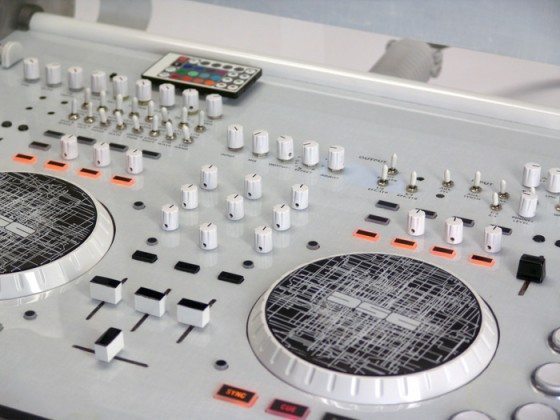 There were a few things about the typical set-up and tear down that I wanted to improve on. Between power, audio and MIDI cables, I got started thinking there had to be a better way.

All-In-One means you now have everything in one easily movable box so to speak. By bringing everything into one cable, set up goes quick, and you have increased mobility. You are no longer stuck behind a table with all of your gear. One cable gives you much more flexibility.  I am building a stand that will allow me to rotate the DSC and allow that movement to be part of the show and allow the audience a peak at what I’m doing.

Which components/materials did you use to build DJ Sound Control and what are the system’s specs? 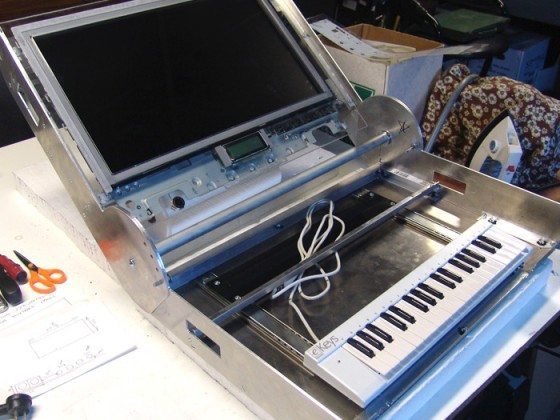 I used .125 5061 Aluminum sheet and angle.  I also used half inch Lexan for the body panels and .020 Lexan for the screen printed graphic membranes that covers it. Both materials are light and Lexan is bullet proof, literally!

Why did you choose these components?

First I like the layout of the Mixtrack controller. Second I am hard on my equipment, so I need the ability to change out parts if I break something. (especially on the road!) I could produce a printed circuit board just for this box, but I figured I could start with a Mixtrack and add to it as I needed. I have two more brand new Mixtrack’s sitting on the shelf that I can immediately rip the main boards out and replace the one in the DSC in about twenty minutes and be up and running. Also I could replace the buttons if I needed as well. And at $100 a piece for the hardware, the total cost to replace it including my time is minimal. Plus most Guitar Centers and audio outlets along the way sell the least expensive gear and all of these components are relatively cheap. If I had to replace my own printed circuit board and all of the custom boards and pots and switches on the boards it might take me a week or more. That is too costly and not efficient for down time on the road. The ABS plastic case for instance, the Mixtrack is installed in is very weak, so I replaced it with half inch Lexan (polycarbonate). It will not crack like acrylic and will not break at all and can be easily backlit.

One thing often overlooked is that bad power-setups can possibly damage your precious equipment. You got that covered as well with the dedicated power pack. What else does it do? 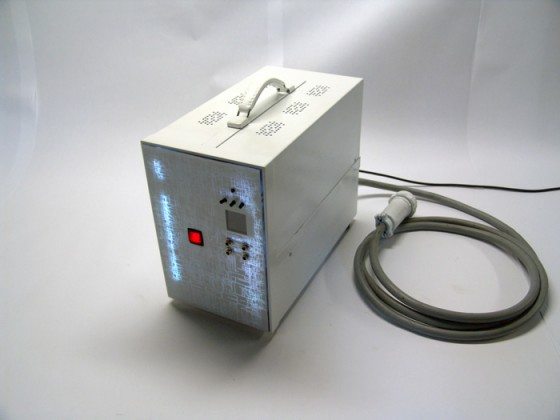 Some bars and nightclubs have the crapiest power and the last thing I would want is a blown system from a huge power spike or short. It will  also run for a full hour without being plugged in. It has 4 lead acid batteries. Of course all services are run through it. One cable contains 110V AC 12V DC 5V DC and sound I/O.

What was the most difficult part about building it? 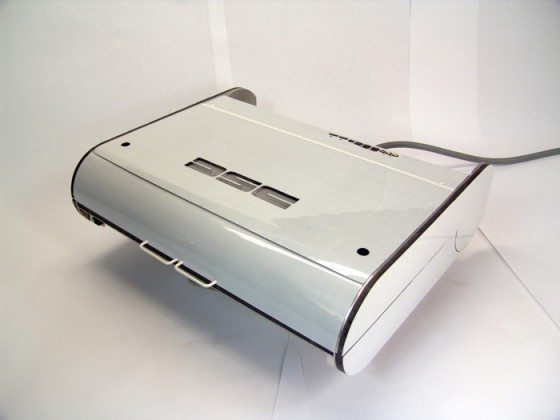 I was consistently designing and redesigning this.  When it is collapsed the DCS measures 7 inches tall.  This was challenging.  I know some want a half inch thick set up, but if you read DJ Shortee’s response to her laptop flying off the table accidentally [note: this was mentioned in the interview with her recently] , you soon realize there is a benefit to more weight and tougher materials.  Ok, maybe this is not ‘carry on’ luggage, but I am confident you will not hurt it with a large party balloon, no matter what size!

How are you going to handle upgrades? 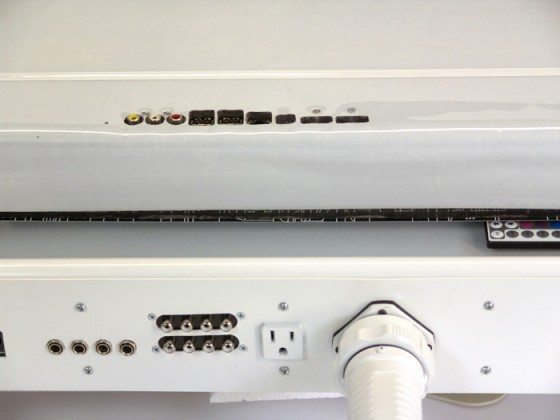 The Lenovo system is more than I need as far as CPU muscle.  The slide out will allow me to slide almost any type of current controller inside giving me flexibility in the future as new controllers come out. Like the new controllers that DJTT just put out.  But whether it’s a mini usb Nanokeys or a Launchpad or a super modified Midifighter, you have plenty of space to work with. The sound card would be a little trickier, but I could do it, no problem. There are plenty of USB ports under the deck.

Please describe how you incorporate all the features of the DJ Sound Control into your DJ sets! Did you see your workflow improving with it? 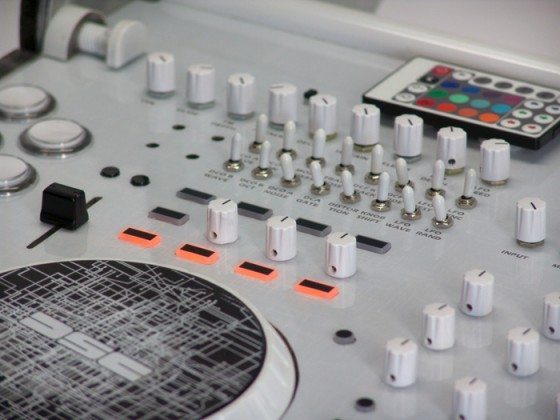 There were two things I noticed immediately. First was that by having the arcade buttons on the sides available for both hands I was able to use them better in a timing sort of way. Plus having them identical made sure no matter what hand I had free I had buttons I could easily get to. The second was how useful the separate output effects are.  By adding the optional Alesis NanoVerb to the output of the overall sound, that gave me even more effects at my fingertips. Putting those effects dead center also made it much easier to access and use.

What do you use all those arcade buttons for anyways?

Both sides are identical. They are clear and backlit. So if you press the bottom button, both sides will light. Why not have two Midifighters?  I actually might do that down the road, but for now I like having the access no matter what hand I have free and I know I can easily control my effects. Plus I use them to control Reaktor’s Razor for a smooth dubstep routine.

Touch-interfaces are a hot topic right now. Do you actually make use of the A700’s touch capabilities?

This is the biggest improvement I noticed.  Super easy to drag and drop into decks (if you want). Easily and instantly drop into anywhere in your currently played track by touching the wave.  I also use it as a backup controller.  During construction I had a problem with the first USB hub and it would short out my mixtrack.  No problem, I just used the touchscreen to finish the set, cross fader and all!

What do you recommend users who want to build their own AIO DJ solution? 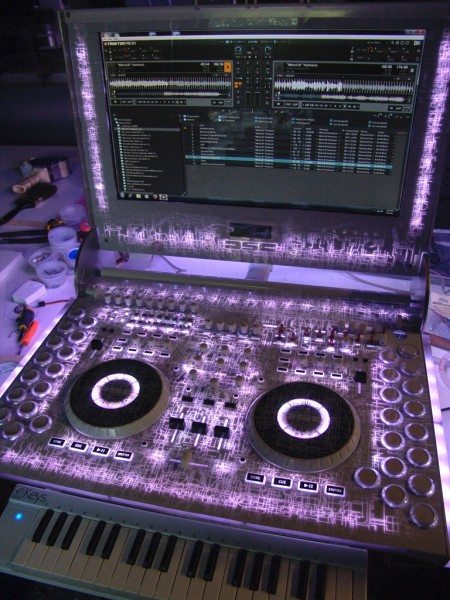 Since you’re going big, don’t get a wimpy processor! Get the fastest you can possibly afford! Same with the RAM, get as much as you possibly can!  You can bet the newer sound software will demand it going forward. Really study the structure of how the components are laid out!  Figure you will not just be able to transplant it into another shell.  It will take some real thought on how to lay it out.  Be careful not to over engineer it.  You can quickly add too much weight. Make sure to add ventilation, especially if you have lights!  They may be low heat LED’s, but they will build heat in a hurry in a closed space over time.

Do you have any last words to say?

I know the first comment I have seen is that people say they don’t have the skill to build something like this. Don’t sell yourself short. Give yourself plenty of time and recruit as many people as you need. Don’t expect miracles to just simply happen. I spent 4 months building this. Not just over the weekend or when I got out of work. Everyday for 8 hours a day (or more) including weekends. Keep at it until it’s done!  Check out the modding forums frequently! Chances are good that someone has started or finished an idea that is similar and will be able to give you tips. Two or two thousand heads are better than one sore frustrated one 🙂

There is more data about the DCS on Chris’s homepage. He gives a detailed overview about how he created the DCS in the flash animation (which takes a long time to load).

You can also see the DCS in action in this video.

Would you prefer to use an all-in-one DJ solution or do you rather want to stick to a modular approach? Tell us in the comments!