So, it’s that time of the year again, when DJ equipment manufacturers the world over head to ‘Brum’ to showcase the new toys we’ll all be dribbling over this christmas and pleading with Santa to bring us. Brad Cousins gives us his lowdown.

If you haven’t attended before, and aren’t sure what it’s all about, BPM is a weekend looking at exciting new controllers, attending seminar workshops (if you want to) and chatting with various industry bods. Mixed into that is the Gatecrasher Arena at the center of the hall, with DJ’s spinning a wide variety of styles of music and the DJ Mag awards taking place the other side of a partitioned wall. Entering into the hall you walk past Reloop’s ‘Play @ BPM’ stage where lower level DJ’s each play half hour slots to showcase their skills, and are instantly assaulted by loud sound systems and people (most of them scantily clad girls) trying to wedge flyers/catalogues/leaflets into your hand. 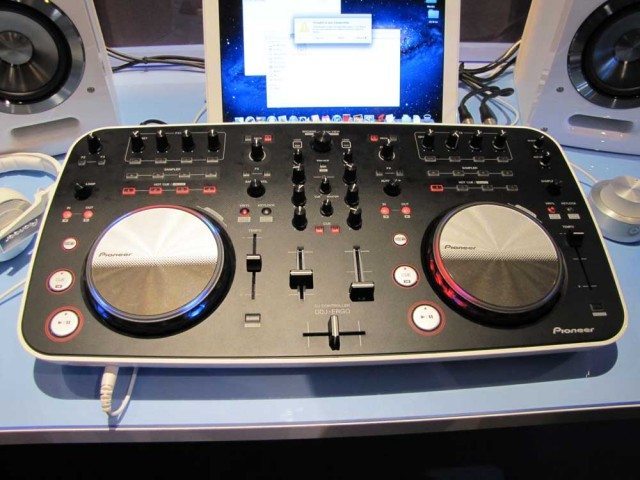 Ok, so we’ve seen the homepage review already and the low down on cost/spec. Looking like the Pro DJ Division has taken a leaf or two from the In Car Entertainment Division (I’ve seen a few ‘Rude Boy’ Corsas this would look at home in). It’s initially hard to take this seriously as a piece of kit for pro use, unless in a trendy minimal wine bar.

The unit feels fluid enough to use, and the controls are nice and responsive. However I found the flashing/pulsing lights to be a tiny bit distracting and some of the build felt cheap. Unfortunately the VDJ software on the one I was testing crashed before I got too in depth.

It’s a pretty collection of flashing lights, with a lot of effort put into the style to attract new starters over. The layout is intuitive and easy to navigate and to be honest if it wasn’t for the fact I find the looks too hard to take seriously, I’d be looking at buying one…. When you sum it up, you’re paying more for form over function. 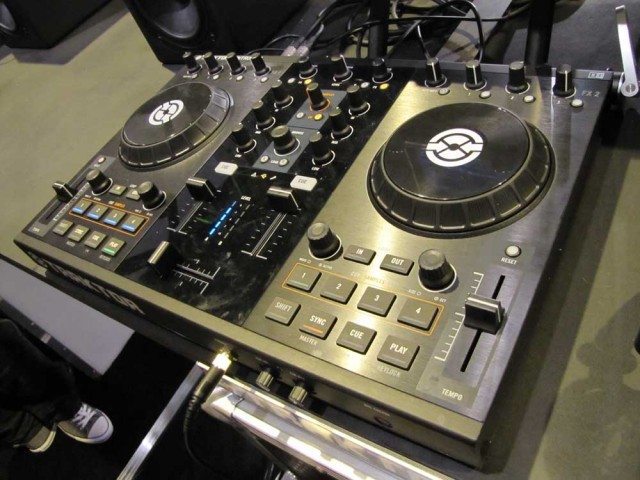 The S4’s baby brother. Some say it’s bringing controllers round full circle to the VCI100’s legacy again, others call it NI’s answer to the VCI… If I’m brutally honest, I call it disappointing. The S4, last year, set a new standard for controllers, in terms of mirroring the software, usability and intuitive clean layouts. This feels like NI trying to reinvent the wheel – partly due to the VCI comparisons, and also as it’s pushed no boundaries. I’ll concede there is a market for a stripped back S4, and the size of the 4 put me off leaving my VCI behind, but i can’t see myself trading ‘Vikki’ in for this either, sadly.

Like a small S4. The quality is there. The control is there. Reached for the filter when testing one it was… ah, balls.

Apart from the lack of filter and control over FX 3 and 4, there isn’t really anything bad to say about this. If you want a smaller, cheaper S4, here it is. 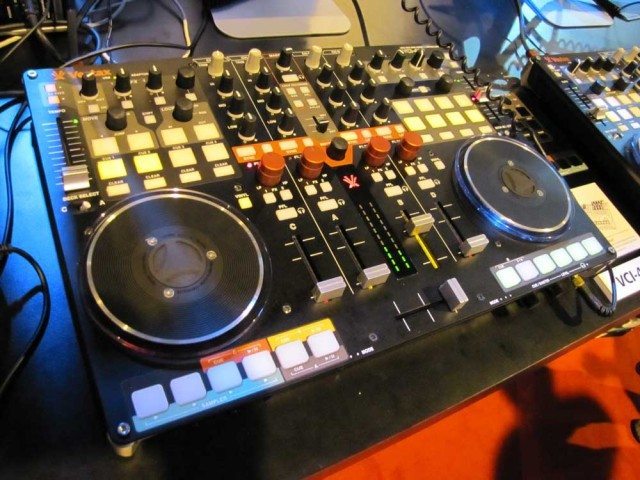 I spent a good 20 minutes on this, and was impressed to see a return of the build quality the VCI100 brought us when it was released. The faders have the right firmness about them that can be slammed or used for a controlled fade. The crossfader also has the same level of response you’d expect from Vestax, in even the pre controllerism days. I was especially impressed with the filter knobs too, being big and chunky with a relative ease of control, and the warning lights. I was less impressed with the pads above the wheels. For jumping a track to a cue or pre saved loop, they’re fine. But i tried them with some cue juggling and they just weren’t tactile enough in my opinion for that. The layout was nice and easy to read, if a bit busy in places.

It’s nice to see Vestax coming back into the game with a solid usable unit. No real new ground broken here. But it is definitely one of the better 4 channel all-in-ones on the market. With a higher price tag than the 100 came out of with, Vestax will probably miss out the beginner market, but should have a firm hold on the upgrade market. 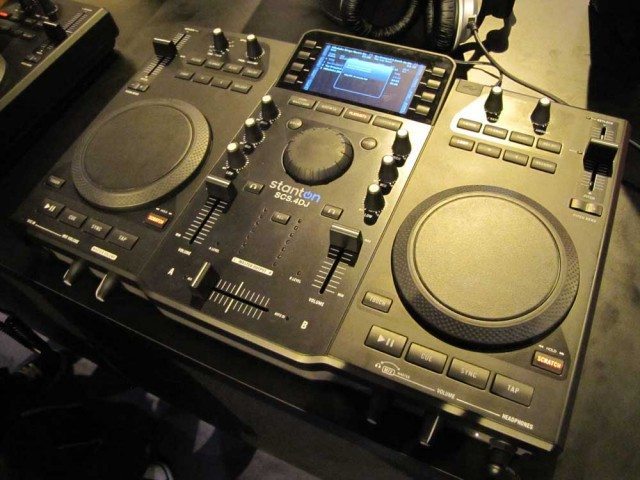 There’s been mixed responses to this little unit, I’m kind of on the fence. While this doesn’t look like I’d take anyone seriously for using, it will drive the market in what i think is the right direction. There are plenty of MIDI controllers out there with built in sound cards. The obvious next step for the all-in-ones is putting the laptop in there too. Imagine an S4 with built in software. DVS hub/sound card/Traktor/library all in one place. Maybe a couple of USB slots for adding other controllers…?  Anyway… back on topic.

Specs at a Glance

For something that looks like a toy, the controls feel to be a decent quality. The jogs are very responsive and the faders & pots felt accurate enough to pull off a straight forward performance. But the lack of cue point controls limit this to being little more than a very basic entry level setup. The casing felt as cheap as it looked, but apparently has some durability to it – though they wouldn’t let me test that…

Interesting concept, and if/when a 4 channel version were to appear that might be worth a look. Sadly it appears you’re paying more for the computer inside the unit, than any real styling or high end build quality. At £450 I think this would suit a beginner that doesn’t have the budget to buy a laptop with the spec to run Traktor or Serato. For pro use? Maybe as a backup unit. 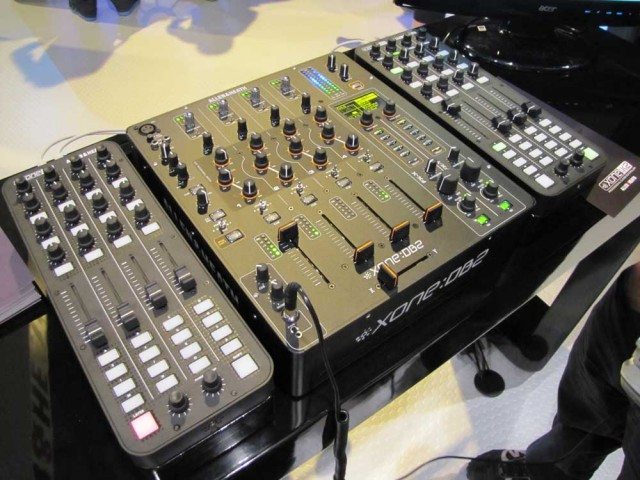 A year after the announcement of the DB4, here comes the DB2. It maintains many of the tricks of the DB4, but with effects being assigned via a menu instead of being dedicated to each channel, some of the bells and whistles – like LED assisted EQ pots – removed, and a slightly lighter I/O section. With everything running through the same Matrix interface, assigning anything to anything is as simple as pushing a button. And styling that screams ‘Look at me!’ perfectly compliment the myriad of technology under the casing.

Alongside the DB2 A&H have also released the K2, hailed as an X1 killer by some. With 3 pages of MIDI, built in soundcard and a Traktor overlay & mapping available, this should be a serious contender in both the beginner and pro markets. [interested in more on the K2? Keep an eye out this week for some exclusive info! – Tech Ed]

DB2 Specs at a Glance

K2 Specs at a Glance

How do they feel to use?

They both have the build quality you’d expect from Allen & Heath, with all controls feeling precise, smooth and accurate. Both units have a nice solid feel to them, and the DB2’s aluminium body feels like a tank. The molded plastic shell (with metal faceplate) of the K2 also feels like it would stand up to some serious punishment from transport and use.

The K2 looks and feels like it will give the X1 a run for its money with its built in sound card and appeal to both beginners and pros alike.

The DB2 is everything you would expect from a stripped back DB4 and I genuinely couldn’t find any faults with it. 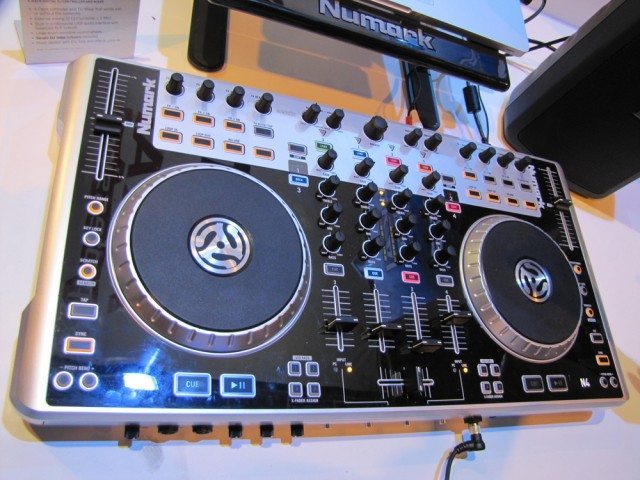 Priced at £350, and with styling that looks like it should be on the same shelf as the Pioneer Ergo in Toys R Us, We have a beginner unit from Numark. With a soundcard that supports in & out and xlr output options for the master out signal alongside the same jog wheel resolution as the NS6, they have crammed a lot inside the casing of this. But at a severe cost to the parts you actually use.

In a word? Cheap. The jogs felt loose and too plasticy, with no real weight behind them. The pitch faders felt a bit too flimsy, and the channel faders didn’t feel tight enough [interestingly I thought the channel faders were a little better than Pioneer’s trademark ‘swimming in molasses’ feel, each to their own! – Tech Ed].

Specs at a glance

This, along with a few other units, has reinforced my concerns that some manufacturers are becoming more concerned with pretty looks to attract customers, and not putting enough attention into the basics. As long time Numark user, starting 10 years ago on their decks and having owned a few of their mixers, I’m surprised to see a decline in quality from these guys. 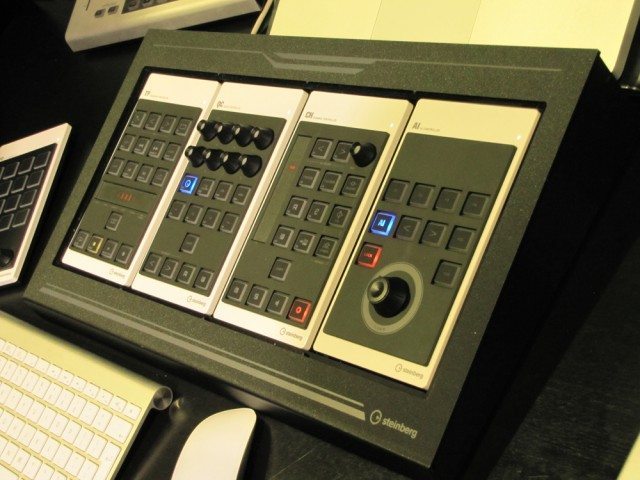 Built as bespoke controllers for Cubase, the CMC series was a nice little surprise. Each unit costs £135 each, except the FD which is £165. Allowing you put together the control arrangement you want without having parts you don’t. ‘But Brad!’ I hear you cry ‘what have these got to do with DJing?!’ Glad you asked, let me explain…

These are all fully MIDI mappable, and if you look through a DJ eye at the layouts you have:

And £135 a piece you can put together a very mobile, easy to carry DJ setup for those times you just want the basics. Imagine Faderfox with a smaller profile… 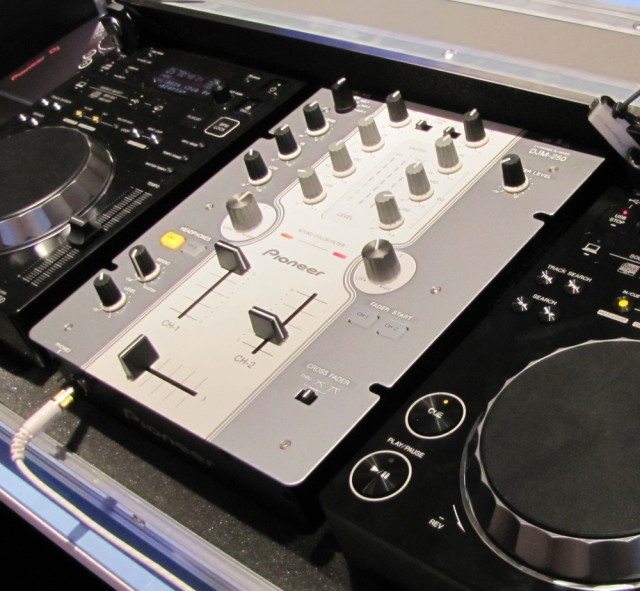 In a world of flashing lights and pretty colours – or the beginners market as some call it – Pioneer has brought a more sensible entry onto the field. Taking sound processing capabilities and filters from the Nexus, this is a serious little number. With styling that says tough and can take whatever you can throw at it, and a simple and clean layout, it will serve any beginner DJ well, or pro as a back-up mixer. The lights next to the big chunky filter knobs to show they are on is a nice touch too, and should help stop filter related ‘accidents’.

Specs at a glance

Taking many cues from the higher end Pioneer mixers, it really does feel as good to use as it looks. It’s simple, easy to use, no fuss. And that’s want you want in an entry level mixer – less nonsense than a John Smiths advert. The filters were a joy to use with a smooth curve on the sound, and the EQs had enough depth to pull off a precision mix.

Priced at £250, this is a bit out on the pricy side when you consider that some entry level mixers come in priced £100 to £150. BUT this is a Pioneer mixer, and you are paying for the quality they are known for from the DJM Series. If you’re just starting out, I would genuinely recommend this.

Obviously the kit I’ve mentioned here is a fraction of the things on display and only makes 30% or so of the show. The rest being made up of reps trying to convince you their product is best and stands for companies that sell PA equipment – which were oddly lacking in interest. There are plenty of production based controllers and equipment, and stands from other DJ equipment producers there as well. But there isn’t enough space to cover everything…

If you’ve got a tenner spare and aren’t busy on the first weekend of October, this will keep you more than entertained.