DJ Unkut, the winner of the DMC Online championships – not to mention a slew of other high profile titles – has just released a new Native Instruments sponsored routine video. Unkut’s been bringing more and more controllers into his turntablism routines recently, and we think this video might be his best example of the two worlds colliding yet – so we asked him a few questions to see if we could get into the mind of a champion…

First the video, then the questions:

Hi Unkut! In the video you have your primary turntable centred between mixer and controllers, and I notice you don’t really use the MIDI buttons on the mixer. What things do you think about when it comes to placement of equipment and the ergonomics of your setup?

It depends on my intentions. When it comes to routines and turntablism the equipment needs to be as close as possible in order to be able to handle Knobs & Buttons as precisely as practicable. Club DJing is different. The x1, for example, doesn’t have to be right next to the turntables. I don’t really use the mixers MIDI buttons that much cause I tend to do everything with the controllers mostly.

The right turntable doesn’t get much love in this video. Do you prefer the sound of cue juggling and effects to beat juggling?

To be honest, I didn’t care that much about covering all aspects in this routine. It is not a classic routine for a competition. My aim was to bring out something musical and extensive, regardless of whether I give both turntables the same amount of love… 🙂

You’ve got a pretty full rack of four FX group banks in the routine. Take us through how you set up the effects, do you have a master setup that you use for everything, or is choosing where and in what order FX go and what to use an integral part of your routine?

Normally, I would start to engage in the combination of effects. That means which effects harmonize, and which ones can be combined with my repertoire. As soon as I have everything I need, I start to check which effects and which sounds fit together. In this routine I got 4Fx banks. I applied three different effects eacch to three of them. At some points of the Fx pattern I layered two effects, and mapped them both onto one Knob in order to control the effect level of more than one effect simultaneously. There are some really juicy combinations. As you can see I like to work with Loops. For me it is a basic concept in order to be able to come up with patterns and ideas. Maybe it is a little more sumptuous, but in the end it makes the patterns more complex and diverting. 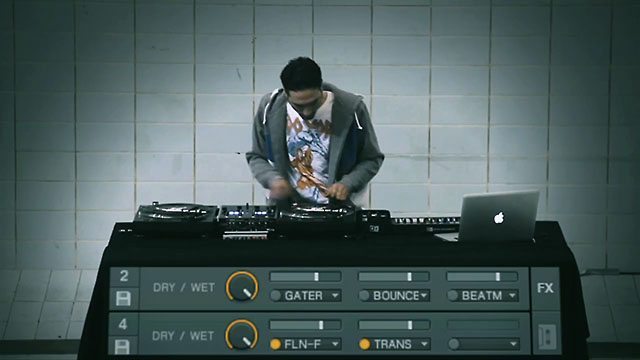 Similarly, do you have your controllers set up the same way every time, or do you approach setting up controller assignments individually for every routine you create?

Every routine is distinct. That means, that the controller adjustments, respectively .tsi Files, are individual because I use different effects and mappings.

Do you think of controllerism techniques in the same way as turntablism techniques? Is there an equivalent to, for instance, transforms, chirps, etc?

I’d say that there are similarities. For example the Gater Effect imitates the transform scratch basically. It works pretty well to combine Turntablism & Controllerism , but they are still different things. I think I’m more in a turntablism mindstate, and I try to incorporate controllerism.

If so, do you like the idea of being able to name these techniques and bring a fun nomenclature to controllerism akin to what exists for turntablism?

Take us through where things really start to get hectic at about 40 seconds in and you’re constantly swapping attention between controller, deck, and mixer. How do you approach the creation of a routine that requires attention to multiple controllers, a turntable, and a mixer?

I go about it in a structured way. First I think about what I want to do in the routine. As soon as I have the first pattern, the rest comes just naturally. I think, I just need a good frame in order to get inspired for the rest.

At around 50 seconds where you start juggling cue points as well as scratching and layering effects, the overall effect is very impressive. How much preparation goes into the files that you’re using – it seems that one of the biggest advantages to using controllers to juggle cues is that you can avoid some of the more sterile preprogrammed custom files that are used so often in DMC rules, two turntable and a mixer setups by juggling with pads?

To build a routine is always really time consuming. Most of the work goes into producing, creating patterns, editing, and practicing to perform it neatly. This routine took me more or less two weeks, working on it on a daily basis. Like I said, I really appreciate that digital techniques are now allowed in battles. It makes the competitions more interesting. Still, battles, and above all the DMC’s, should be connected to vinyl, and it is essential to keep it that way. The ability to manipulate vinyls and the skills you need are the most important part, and should always be given priority.

What’s your favourite effect in the routine, and can you give a quick tip to our readers on how they can set things up to achieve something similar?

I think it is the whole concept, the overall image. Still, if I had to pick one effect, it would be the “Flater” probably. Something that always kicks it off is the layering of effects, and working with Loops. For this routine, respectively the Fx part, it was essential.

Many thanks to DJ Unkut for his time! The video also introduces NI’s new timecode, which we’ll have more info on soon… interested?