Native Instruments had a bit of a sleeper hit with Maschine. It started off slowly but in the two and a half years since its release it’s managed to cause quite a stir. Now, Maschine Mikro is the new kid on the block; is a cut down version of the beat making machine a DJs dream?

If you use Mikro as a groove box and integrate it into your set that way, then it’s great value providing you have the horsepower to run the Maschine software alongside your DJ software of choice. If you’re just planning to use it as a MIDI controller, it’s a bit of a waste of money.

TO GROOVE OR NOT TO GROOVE? 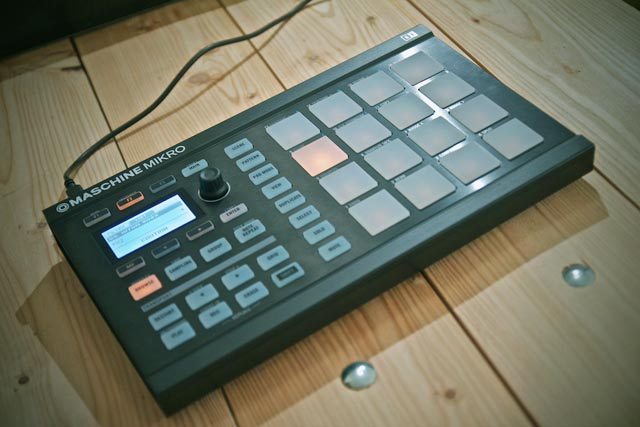 There’s a very important point regarding Maschine: it’s not a controller, it’s an ‘integrated solution’ in that it’s a software groove box with a bespoke piece of controller hardware. It’s not too surprising, then, that the pure DJs and controllerists amongst you haven’t really jumped on the ‘full fat’ Maschine seeing as it costs twice as much as a pad or button controller that can do just as much if not more with your DJ software.

Regardless of what some people would have you believe, it’s not a prerequisite to make music to call yourself a DJ. Music production and DJing are two very different skillsets – albeit with some overlapping qualities – but that’s not to say that a groove box should be outside the realms of  the DJ booth, so let’s take a look at how Maschine Mikro fits into the DJing paradigm…

Mikro is a sturdy little piece of kit, with a metal faceplate and good quality plastic bodywork. If you’re precious about keeping your equipment pristine then it’s probably a good idea to invest in carry cases and maybe even an overlay, though, because the black topcoat on the faceplate scratches quite easily to reveal the metal underneath.

The menu and function buttons on Mikro are squidgy and don’t click when they’re pressed; they’re not the best buttons for assigning to things you want to go nuts on, but their slight springiness means they’re not the worst either. The pads, on the other hand, feel great. They’re velocity and pressure sensitive, and sensitivity is constant across most of the pad. At the very corners of the pads there’s a tendency for them shift in the housing rather than trigger, but they’re large enough that that’s not really an issue. The pads don’t depress much, and the rubber’s very firm so there’s not much bounce – just enough to be kind to the pads of your fingers whilst rocking out a heavy handed cue juggle. The sensitivity is such that when set to max, poly pressure is actually triggered with a hair’s touch, and note on takes just a little bit more to register. This is probably a ‘safety’ feature incorporated by NI as you can literally trigger poly pressure messages on other pads when your shirt sleeve (in my case comfortable cardigan) touches them whilst pressing another.

Mikro’s solitary rotary encoder doubles as a push button. To those of you who’ve used NI’s Kontrol X1: more of the same. Those that haven’t: it’s got about 20 clicks per turn, feels just right, looseness wise, and the button press sits just right between being too easy to accidentally press and being tough to get when you actually want it. 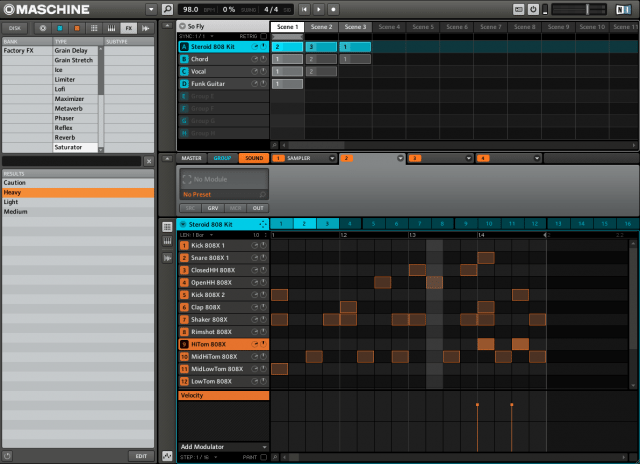 The Maschine software itself has become incrementally better featured in its two and a half year time on the market. It started out as a simple, closed off groove box and now it’s happy to play with other software by syncing MIDI signals, using plugins, sending multiple outs, even being a plugin itself while it does it. If you use something like Ableton Live or Torq to DJ then you’ll be able to drop Maschine in to your rig as a plugin, or if you’re a Traktor user then you’ll have to sync the software behind the scenes. Once that’s done, though, you’ll be able to trigger loops, samples, and effects in perfect time with your host with way more power than, for instance, Traktor’s sample decks.

The Maschine software (at 1.7 at the time of this review) has so many features, some of which aren’t that relevant to DJ use, that going through them all would take an age and wouldn’t really leave you any better informed as to whether or not it’s got a place in your setup. That in mind, here’s a list of the killer features that make Maschine potentially great for DJs:

You can also load in VST/AU effects and instruments to Maschine, send 16 separate outputs, and a whole lot more besides. All this functionality does come at a cost, though, and much like software like Ableton Live or perhaps Torq, whose more open nature means that there’s more of a need to test things on a per-project basis, you can’t guarantee you’ll be able to add things ad-infinitum (and it’s definitely not a great idea to test out a brand new idea on the night). 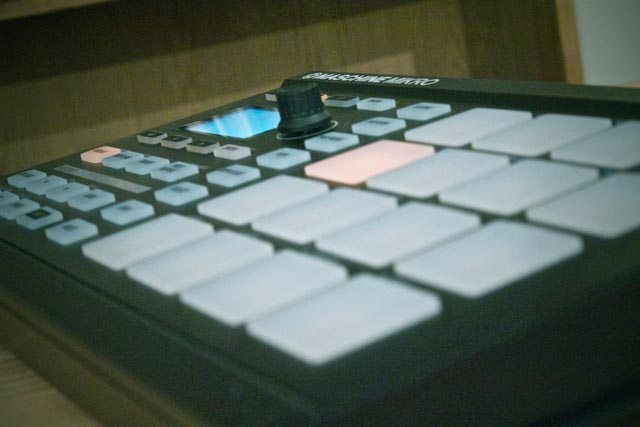 Whilst Maschine is 1:1 mapped to its own software, you’re quite welcome to use it as a MIDI controller too, and switch between modes by holding Shift and pressing F1.

The Maschine Mikro controller editor is really simple to use. It allows you to decide whether you’d like to use the group mode of the pads or have the group button as an assignable button, as well as allowing you to create at least 40 (I got bored adding them by that point) different pages for the knob, F1, F2, and F3 buttons that are switched with the left/right navigation buttons. All the buttons can be set to hold, toggle, gate, and even incremental directly in the hardware, and setting up the LED behaviour is simple.

One disappointment with the editor is the way that the blue LEDs can’t be utilised in MIDI mode. I suspect that only the top eight pads (the ones used for group selection) have the multi colour LED, but it would still be nice to have the option to use them.

Whilst you can use Maschine simply as a MIDI controller, and it’s great to have the option to do so (especially as you can switch on the fly), it’d be a really daft idea to buy one just to map to MIDI software. In doing that, you’re shouldering the development costs and licence to the entire software side of Maschine that make Mikro cost more than competitors’ pad/button controllers that have more, or at least more relevant to DJs, controls. (the Akai MPD32, Korg PadKontrol, and the DJTT Midi Fighter spring to mind). 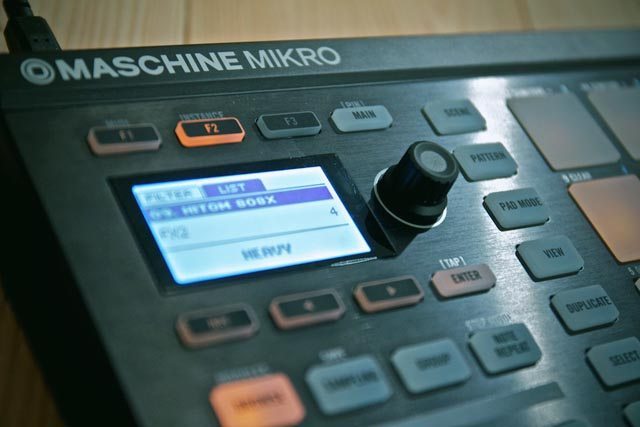 Maschine can be a dumb controller, provide loops and samples to augment your DJ set, and even moonlight as a capable music production tool when you’re away from the decks. The thing is, it’s only really great value when you want to do ALL these things. It’s good value if you want to do a couple, and not so great if you only want to use it as a MIDI controller. It’s definitely better placed to augment a setup than its big brother though, whose imposing size might not easily find a place amongst your existing equipment.