Pioneer’s latest controller is a departure from the strategy that they’ve adopted over the past 18 months, namely of putting big ticket prices on their first forays into controller and computer based DJ gear. The DDJ Ergo isn’t a budget priced controller, but it’s definitely in the realms of purchasing possibility for many first time buyers. Let’s see how Pioneer have managed to do it… 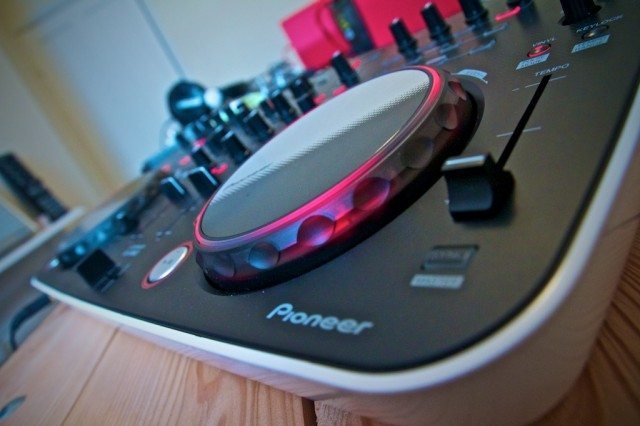 If you love the look of Ergo, and especially if you’re not a fan of Traktor, it’s probably a good buy. That said, ergonomic bottlenecking and the fact that it doesn’t really offer anything, except looks, that other cheaper controllers do means that it’s by no means a stand out contender for any thrones.

JUDGING A BOOK BY ITS COVER 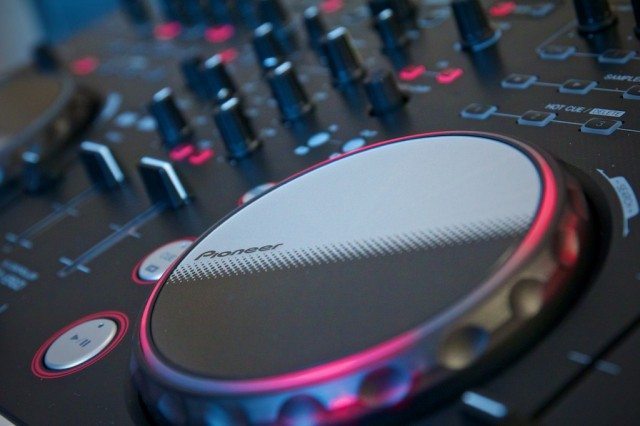 Ergo has a distinctive look. View it from the top, unplugged, and it’s a somewhat average looking black fascia with recognisable Pioneer stylings. From an angle, things start to get a little more space age. The gloss white, curved edges become apparent, and two back legs (that need to be unscrewed to be removed) put the entire unit at a shallow incline. Plugged in, that effect gets multiplied by a red and blue light show that makes the entire unit look like something from Back to the Future II. I’m all for designers pushing the envelope – heaven knows there are enough matt black, sharp edged boxes – but there’s a general resistance to too much flashiness in the industry, and when I asked a non-DJ friend what he thought, he said “it looks like a toy”. Pioneer have consciously gone after the consumer market with Ergo, and in doing so have seemed to go with what a layman thinks DJ equipment should look like, rather than going with the grain and designing something more reminiscent of the norm. This creates an issue, in that using Ergo is going to, for better or worse, present you in a certain light amongst people who have any frame of reference for what DJ gear usually looks like. 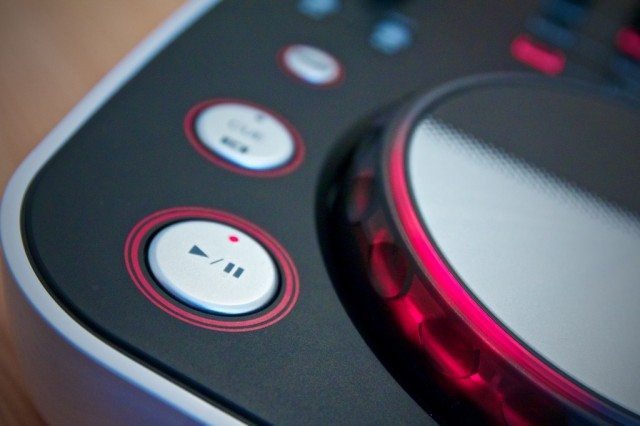 The Pioneer jog wheels are one of the big reasons for buying in to any low level Pioneer gear. Whilst these smaller wheels don’t feel identical to the larger ones found on the pro level CDJs they do have a degree of similarity that should make going through the ranks of Pioneer-dom easier to adjust to – it’s perhaps worth saying that I’ve never particularly been a fan of the feel of a Pioneer jog wheel, but they’re certainly the industry standard so what do I know?! They’re not hugely ‘spinny’, but there’s a feeling of momentum that’s quite pleasant and whilst they do have a slight blunt feel to them when it comes to positioning, they’re accurate enough to transcribe motions into fairly smooth manipulation of audio.

Pioneer are definitely keeping up their trademark feel elsewhere on the unit, with a light crossfader and heavy channel faders. The crossfader feels okay, it’s nothing to really write home about but the lag on either side of the fader is acceptable – at around 2.5mm – and there’s a smooth action. The heavy channel faders are just clunky though, and I wish Pioneer would start loosening them up in their new gear. The pitch fader is also quite stiff – completely different to Pioneer’s CDJ offerings – and has a central detent to help you find the middle.

The Pioneer play and cue buttons have been ditched in favour of a slightly different, curved bezel style that fits in better with the overall aesthetic of the Ergo, and the buttons for other features are stiff plastic which depresses only a very small amount before activation. Manufacturers in general are still undecided about how to ‘do’ buttons on new equipment, mindful of the fact that some of us like to map and remap controllers and use any button going as a potential performance control, but also that there is still a (presumably) much larger portion of the market that has a much more traditionalist approach to equipment and DJing in general and to ramp up the cost of a unit by dropping in top quality buttons on everything would be commercial suicide. I think that the style of button on Ergo is about my favourite way to do a cheap controller’s buttons, as the action is quick and there’s little to no ‘waggle’.

Knobs are made of very stiff plastic that has indentations all around the outside. Rather than use the high level caps from the big boys of the DJM series, it’s the budget range of caps that are on offer, and they’re both smaller and less comfortable to use; the deep indentations have a somewhat spiky feel that doesn’t really feel great on the pads of your fingers.

All in all, the build of the Ergo is a bit of a mixed bag. On one hand, it’s a solid unit with decent jog wheels, crossfader, and well compromised buttons, on the other hand, the other controls on the unit are distinctly average. 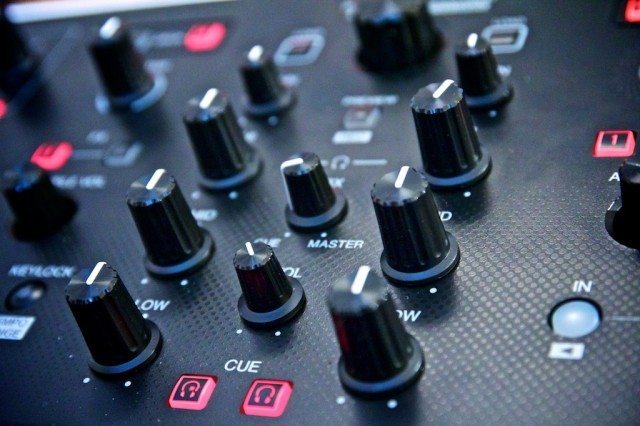 Ergonomics wise, Pioneer get brownie points for avoiding the temptation to design Ergo with horizontal symmetry. There’s a definite ‘deck’ design that’s duplicated on either side of the mixer, and generally all’s well when it comes to placement… at least for beginner level use. In reality, whilst things like loop buttons and filter are given plenty of space, the other performance controls are just a little too close together for comfort; the effects dials are nearly on top of each other, the buttons for sampler and cue are too small, and the EQ, gain, and headphone monitoring is awkwardly snug. The placement of the sampler and cue buttons atop the jog wheels is a pretty well accepted place to put them, but if you really bug out there’s a chance you’ll tap the jog wheel itself. It would probably have been better to have put the buttons, or at least some of them, below the jog wheel to facilitate cue juggling and so on. The dual layer four deck control feels a bit like a nod to the fact that four deck is the latest craze, and the Ergo feels a little behind the curve when considering other controllers that are implementing four physical channel faders into their design. 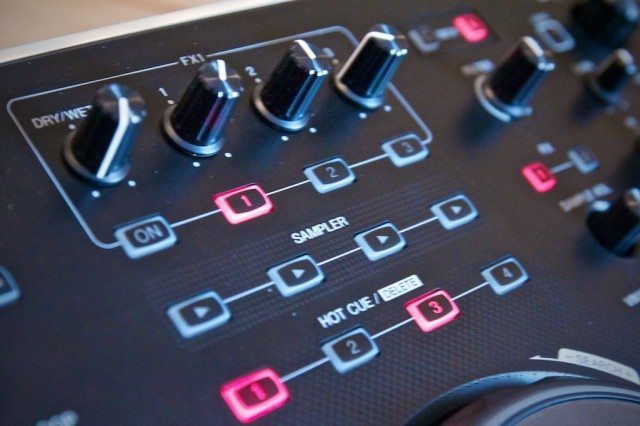 Included with Ergo is an OEM copy of Virtual DJ, which may turn some of you off but the truth is for basic performance VDJ can cut it. Ponying up for the full version of VDJ to allow all features – including expansion for extra controllers – is once again where it fails as a value proposition, though, as Traktor Pro blows it out of the water when it comes to included effects and general tightness. If you want software to grow with you and your setup, you’re going to have to think about adding Traktor (or a full licence for VDJ, Torq, or similar) to the shopping list.

The days of Traktor being included with third party controllers may be coming to an end now, as NI begin to use its inclusion as a USP for its own hardware offerings. Nonetheless Pioneer have included a Traktor mapping for the Ergo; as you’d expect Ergo gets mapped to Traktor fairly ‘straight’, and the jog wheels have the expected somewhat sloppy feel that third party wheels tend to when mapped to Traktor.

If you’re just after a no nonsense controller, Virtual DJ is fine, but much more exciting is the news that Serato Intro will very soon officially support the Ergo. Serato’s user interface is superb and the Serato way of handling scratching style playhead manipulation sounds much better than both Traktor and VDJ’s, and whilst it doesn’t have any upgradeability it should increase the value of the Ergo package a whole bunch. 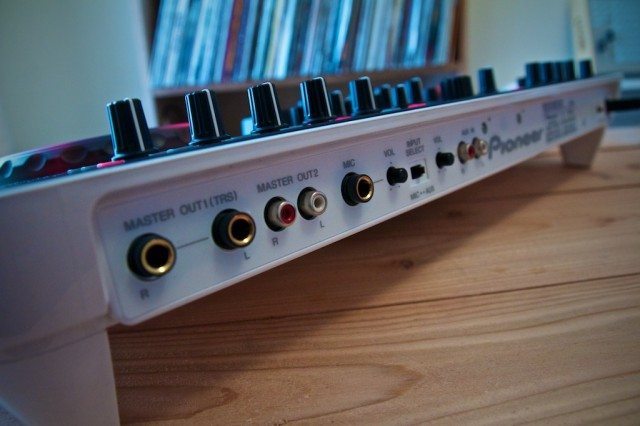 Being an all-in-one, Ergo’s also got onboard sound going for it. There’s a mic/aux channel, TRS and RCA master outs, and two front mounted headphone sockets: one for 3.5mm and another for 1/4″ headphone jacks. Considering it’s an entirely bus powered interface there’s a decent amount of volume from the outputs, and because the actual mixing’s done in software there’s not so much worry about the headroom issues we’ve spoken about in previous articles. In any case, Ergo is pitched to house party DJs rather than super club DJs and it performs just fine for that purpose.

The fact that the Ergo is packaged only with Virtual DJ LE detracts from its value compared to, at this price, its main competitor: the Native Instruments Kontrol S2. Serato Intro will give it more weight, but in reality Ergo doesn’t really add much above and beyond controllers that are quite significantly less expensive like the Numark Mixtrack Pro or (and having not had more than a preliminary play I can’t vouch for it yet) N4 – both of which also have Intro. If the look is what you’re going for, then you’ll probably love the DDJ Ergo. If you don’t think it looks any better than the more accepted consumer focused gear, ie the more Fisher Price looking efforts from Numark and Vestax’s budget lines, then you’ll struggle to see where your extra money’s going.