Beatport seems set on becoming a hub for DJs with today’s launch of a remix contest platform called Beatport Play. This new dedicated site features songs from top-tier talent like Steve Aoki and enables budding producers to get their work on a major label. We also have a inside look at the new Beatport “artist pages”, a DJ social network of sorts, which is currently in alpha.

Beatport’s new site, Beatport Play, ships with five brand new contests from big names like Steve Aoki, Chuckie, and Bingo Players. The remix rules are very similar to Beatport contests in the past – the producer provides the stems, and contestants remix the stems in their DAW and upload them to be voted upon. The grand prize winner is then chosen by the label who will ultimately release and distribute the winning remix.

The prizes include a Novation Twitch, Ableton 8, Pioneer monitors and more,  but getting a remix released on a major label is possibly the best prize. Just ask now-famous producers James Zabiela or Zedd, both of whom had their careers kickstarted in that very way.

We’d love to see some of you guys win these contests, so when you’re done, share your final product on our forums in the Mixes and Productions section to enlist our support!

There’s most certainly a cause for concern for two sites in particular who have created excellent remix platforms in the past, Find Remix and Remix Comps.

We’re not convinced that Beatport Play will run these sites off the web, but the draw of running an exclusive contest on Beatport Play is sure to appeal to artists and labels due to the massive amount of exposure. There could be room for everyone, however, with a Beatport focus on contests with major players, while the smaller outfits pick up less known artists.

We’ve been watching an interesting new development coming from Beatport in the next few months, Beatport DJs. Our initial take is that it’s a super simple social network for DJs, allowing them to create a page showing off their Bio, SoundCloud Tracks, and Beatport Charts. While at the moment it’s easy to say that this is just another listing site for DJs, it is also important to remember that Facebook seemed like just another social network when it first started. 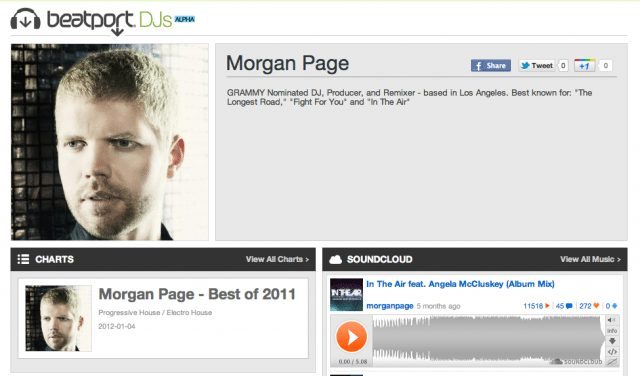 The power of having a profile with “beatport.com” in the URL is certainly worth something.. The image above is an alpha version profile from Morgan Page. The service is in early alpha at the moment, with no word on when the public beta will start – but we’ll get you the inside scoop before anyone else!

Our own Powertools remix contest is over February 5th so dont forget to enter that one.  How do you feel about contests in general? Are you excited about Beatport Play, or do remix contest platforms not interest you?